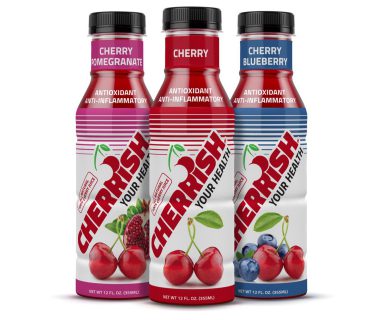 SEATTLE— Professional athletes are always looking for an edge. They seek out products that improve performance and recovery without harming their bodies. Now, five professional athletes from the NBA and MLB have joined forces to endorse a high-performance, high recovery beverage engineered by Mother Nature for active and athletic consumers everywhere.

The CHERRiSH brand currently sells their product to numerous professional and collegiate sports teams across the country. The company has also seen rapid growth and expansion in the consumer segment over the past year with multiple new regional retail distribution announcements as well as a product line extension. The new athlete Champion program will continue to promote the brand’s position as a premium sports recovery and functional wellness beverage, designed to elevate the performance of both athletes as well as everyday consumers.

“We’re ecstatic to welcome these high-performance athletes to the CHERRiSH team,” said Dan Haggart, founder and CEO of CHERRiSH Your Health. “Professional athletes need to stay healthy and in optimal shape in order to consistently deliver at the elite level, and it’s our privilege to help them achieve this with CHERRiSH.”

CHERRiSH is offered as a 12-oz ready-to-drink cherry juice beverage as well as in a 3-oz concentrate pouch, and is unique due to the proprietary combination of Montmorency tart and sweet Bing cherries. Besides delivering a balanced tart and sweet flavor profile, the blend also creates a synergy that enhances both cherries’ antioxidant capacity, as phytochemicals from each varietal work to strengthen and potentiate each other, resulting in a maximized antioxidant score – that of the highest of any beverage on the market.

All CHERRiSH products are low-glycemic, non-GMO, made from 100% whole USA-grown premium cherries, using both skin and pulp. They contain no added sugars, filler juices, or artificial ingredients.

More than 50 studies have documented the comprehensive health benefits of the Montmorency cherry, shown to contain the highest anti-inflammatory content of any food. Benefits include quicker muscle recovery time, less stiffness, soreness and pain in the body, as well as reduced levels of chronic inflammation.

Other benefits include better quality sleep, reduced insomnia, lower blood pressure and blood sugar, improved microbiome health, delayed neurodegeneration, and improved memory and cognition. A recently published study even demonstrated its ability to significantly lessen the painful side effects from cancer treatment, such as joint pain and muscle soreness.

CJ (Christian James) McCollum, 28, is a starting shooting guard for the Portland Trail Blazers. A graduate of Lehigh University in Pennsylvania, majoring in journalism, he was named Patriot League Player of the Year both Freshman and Junior years and holds the record as the all-time scorer in the Patriot League. A seven-year veteran of the NBA and named Most Improved Player by the league in his third year, McCollum also hosts his own popular sports podcast “Pull Up with CJ McCollum”, named one of the 15 best sports podcasts of the year by Esquire Magazine. He is also involved with his community, and through his partnership with Boys & Girls Clubs of Portland, has opened up the CJ McCollum Dream Center to provide a safe and inspiring space for underserved youth to learn, explore, create and grow. CJ claims that “CHERRiSH is a key part of my training routine. I utilize it to refuel and replenish after intense workouts”.

Zach LaVine, 24, is a shooting guard for the Chicago Bulls, having been selected in the first round of the 2014 NBA draft. The native Washingtonian was the state’s top high-school player, then going on to play one season of college basketball for the UCLA Bruins where he was named one of the top freshmen in the Pac-12 Conference. Entering the NBA with the Minnesota Timberwolves, he stayed for three years before being traded to the Bulls, where, in November of 2019, LaVine scored a career high 49 points, with 13 three-point field goals, including the game-winning three pointer to defeat the Charlotte Hornets 116–115. LaVine is a two-time winner of the ‘NBA Slam Dunk Contest.’ He won the title in two consecutive years: 2015 (when he was just 20) and 2016. A true Champion, Zach claims that “CHERRiSH helps me stay on the court and it tastes great”.

LaMarcus Aldridge, 34, is a power forward for the San Antonio Spurs, widely known for his signature fadeaway jump shot. He was selected second overall in the 2006 NBA draft, and after spending nine seasons with the Portland Trail Blazers, signed with the Spurs in 2015. He has been selected to five All-NBA teams, is a seven-time NBA All-Star, and in the 2019-20 season became the first player in the NBA to score 18,000 points and grab 8,000 or more rebounds since 2006 (his year of draft). “I never knew tart cherries had so many benefits…now I drink CHERRiSH everyday”, says LaMarcus.

George Springer, 30, is an American professional baseball outfielder for the Houston Astros of Major League Baseball, having been selected in the first round (11th overall) of the 2011 MLB draft. He played college baseball at the University of Connecticut, where he was named Big East Conference Baseball Player of the Year and a First Team All-American. In 2017, Springer became an MLB All-Star, Silver Slugger Award winner, and World Series champion, named the 2017 World Series Most Valuable Player (MVP) after hitting a record-tying five home runs. Even though he has seen much success, Springer claims “You don’t need to be a pro athlete to get the benefits of CHERRiSH”.

Brett Gardner, 36, is an American professional baseball outfielder for the New York Yankees of Major League Baseball. He made his major league debut with the team in 2008, was a part of the Yankees’ 2009 World Series championship team, and in 2015 he was named an All-Star. He then won a Gold Glove Award in 2016, and holds the current spot of longest-tenured New York Yankee. Earlier this year, Gardner hit his 100th career home run, a grand slam, and became one of two players in Yankees history with 100-plus home runs and 250-plus stolen bases. He is indeed best known for stealing bases and his discipline and talent at the plate, making contact with 93% of his swings, third best in the American League. Brett says “With 12 years in the big leagues, you learn the best ways to fuel the body and that’s why I endorse CHERRiSH”.

Founded in Bellevue, Wash, CHERRiSH harnesses the power of US-grown Montmorency tart and sweet Bing cherries to develop delicious and powerfully nutritious products. The juice line is available in three delicious flavors: Cherry Original, Cherry Pomegranate and Cherry Blueberry, and the pouch concentrate is available in Cherry Original. CHERRiSH can currently be found online at http://www.CHERRiSH.net, as well as through the Amazon Marketplace at Amazon.com and in select grocery and convenience stores throughout the country. For more information, visit: http://www.cherrish.net.