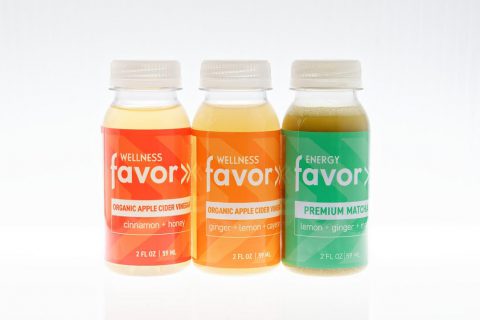 As a former college basketball player, Ben cares about his health but has limited time to invest in it. Through Favor, Ben provides health-promoting ingredients in an easy-to-drink, grab-and-go 2 oz. shot that doesn’t skimp on taste. The addition of Favor’s Matcha shot reflects Ben’s commitment to making wellness a seamless addition to your daily routine.

Before starting Favor through Union Kitchen’s Accelerator, Ben drank ACV on a regular basis to support his digestion and gut health. With one quick and easy swig, Ben could reap the health benefits associated with the ACV beverage. However, he realized that many people found ACV bitter and hard to swallow. Determined to create an enjoyable ACV shot that didn’t sacrifice taste, Ben created Favor.

Since the launch of Favor’s ACV shots, Ben has been busy with Matcha! He wanted to expand on the functional benefits offered by Favor’s products. Favor’s ACV shots promote general wellness, but the new Matcha shot does that and more. Matcha, a Japanese green tea powder, offers a heap of health benefits. Lower blood pressure, lower cholesterol, and protection from cancer are possible benefits associated with matcha consumption. In addition to these functionalities, Ben specifically chose matcha for its energy boosting effect. Two teaspoons of matcha powder offers about 140 mg of caffeine – the average cup of coffee has 95 mg. Matcha’s double-punch of health and energy has converted many former coffee drinkers into matcha-holics.

Even with Ben’s expertise in functional shot production, the Energy – Matcha + Lemon Ginger Maca Shot brought new challenges. Ben enjoys drinking matcha lattes, but he had never sourced the ingredient himself. Unlike the straightforward ingredients in Favor’s ACV shots (lemon, ginger), matcha has a different taste profile depending on its grade and where it is harvested. The highest grade of matcha – ceremonial grade – is sourced in Japan using younger tea leaves that guarantee a delicate flavor and smooth texture. This grade is used for traditional Japanese tea ceremonies. The lower grade of matcha – culinary grade – is made from older tea leaves and used for cooking, baking and everyday drinking. Culinary grade matcha is likely used in your coffee shop’s matcha latte or a restaurant’s matcha mochi ice cream. Sourcing high-quality matcha was a priority for Ben. Luckily, he had Union Kitchen foodie friends to steer him in the right direction! Revol Snax founders, Dave Birsen and Nadine Calderon, use matcha in their matcha latte bites and connected Ben with their trusted matcha supplier.

Product formulation was another hurdle Ben had to overcome. Matcha has a grassy taste and velvety texture when served as a beverage. Ben’s initial trials focused on adding sweetness to the shot and improving its smoothness. Favor puts functionality first, so Ben was very meticulous with his recipe development and how he integrated the matcha. He realized that changing the serving sizes of each ingredient in his shot could compromise the all-important health benefits but also had a very real impact on flavor and texture. With a lot of research and help from his nutritionist, Ben found an ingredient make-up that hits functionality and tastiness.

Favor’s shots get straight to the point — take the shot, feel the benefits, carry on with your day. When asked why matcha, Ben said, “I chose matcha because I actually like the flavor and understand its important health and energy benefits.  Like all of Favor’s products, I am not hopping on any trend. As I learn more about functional ingredients, my business evolves to provide these important ingredients in a grab-and-go format.”

Grab Favor’s new Energy – Matcha + Lemon Ginger Maca Shot and original ACV shots in Union Kitchen Stores throughout the city! And keep Favor on your radar — Ben hints that another functional shot is on the way. He promises it will be different from the rest!