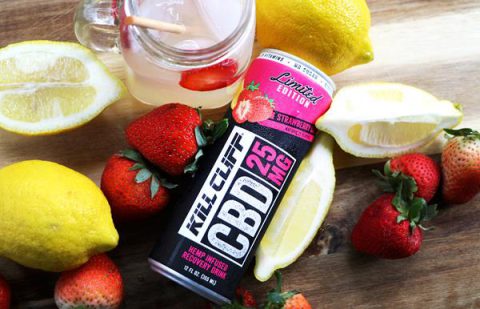 ATLANTA— Kill Cliff, the clean energy drink company, just added a fourth CBD beverage to its already impressive arsenal- Strawberry Daze. Excitement and anticipation of the new flavor led to the most successful launch in brand history with record online sales. The strawberry lemonade flavor is refreshing and easy to drink, making it an instant favorite among fans. All Kill Cliff CBD beverages contain 25mg of CBD, derived from 125mg of full spectrum hemp, in addition to B-vitamins, electrolytes, and plant extracts to provide clean hydration with no sugar and no junk.

The launch comes at a time of unprecedented brand expansion. Kill Cliff Ignite has emerged as a major growth driver with more than 3,000% increase in online sales in August compared to last year. Ecommerce is up 270% overall YTD with subscription transactions accounting for more than half the business. Likewise, retail distribution grew by over 40% in the first six months of 2020, racking up wins with retail giants like Publix and Walmart. New partnerships with prominent Molson Coors and AB InBev distributors have taken the lead in bringing Kill Cliff clean energy drinks into c-stores in some of the country’s largest markets.

Updated packaging for the original Kill Cliff product line will also begin making its way to the market this month. Most recently known as Recover, this lineup is getting a killer new design consistent with the broader portfolio that also speaks to the multitude of consumer usage occasions. “Our customers have always referred to this product as drinking ‘a Kill Cliff.’ In addition to drinking it during or after a workout, our consumers enjoy it as a replacement for a cup of coffee or as a mixer to make clean cocktails in the evening,” says Kill Cliff president, John Timar. “The new, killer design and packaging prominently displays our brand, the bold flavors and calls out the key attributes of ‘Energize and Recover.’ It is a low caffeine option providing all natural clean energy and recovery that you can crush anytime.”

Beyond providing the cleanest and best tasting beverages, Kill Cliff inspires a way of life. With nearly one million followers across social media channels and building large brand partnerships, Kill Cliff has ramped up its award-winning video content to entertain and engage consumers. Under the leadership of six-time Emmy Award winning CMO, John Brenkus, Kill Cliff has created a state-of-the-art studio in-house, launched Kill Cliff TV, and is churning out weekly live streaming shows, including Rumble Time Live and Conspiracy Truth Finders. These shows feature a wide range of celebrities such as WWE superstar Lacey Evans and top UFC and Bellator fighters.

To learn more or purchase the new Strawberry Daze CBD visit killcliffcbd.com. New Ignite and Kill Cliff Energize x Recover flavors can be found at killcliff.com and at many popular retailers. To crush your craving and find Kill Cliff near you now, visit our store locator page.

Founded and created by a Navy SEAL with the spirit of giving back to the community, KILL CLIFF® makes clean and delicious energy drinks. KILL CLIFF products deliver clean fuel for the active lifestyle, providing energy, hydration and nutrients without all the junk so many beverages have today. Kill Cliff was just voted one of the 250 most disruptive brands by IAB and is poised to make significant gains in the multi-billion dollar beverage market. Headquartered in Atlanta, the KILL CLIFF team includes civilians and accomplished military veterans and is absolutely committed to serving and supporting the Navy SEAL community. KILL CLIFF honors the dedication and sacrifice made by these warriors and their families by donating a portion of the proceeds through their Official Partnership with the Navy SEAL Foundation. Visit KillCliff.com and follow KILL CLIFF on Facebook, Twitter, YouTube, and Instagram @killcliff.