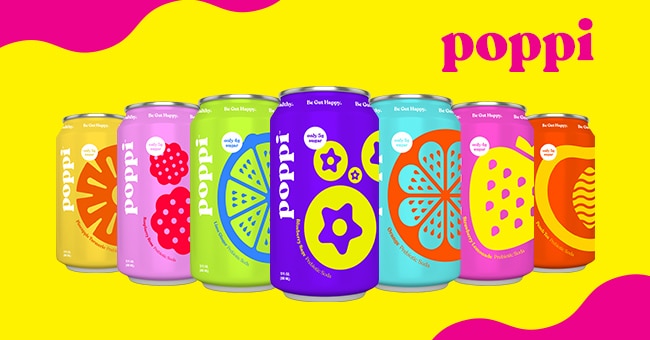 By the airing of its appearance on reality TV show Shark Tank in December 2018, Mother Beverage was already considering a possible rebrand. Now, with co-founders Allison and Stephen Ellsworth having just wrapped filming on a check-in for the show, the apple cider vinegar drink brand has plenty of updates to share, including a new name, different packaging and distribution momentum.

Just after landing a $400,000 deal on Shark Tank which saw CAVU Ventures co-founder Rohan Oza take a 25% stake in the company, the Ellsworths realized they needed to make a change because they couldn’t trademark the name “Mother.” Furthermore, Allison told BevNET that Oza was most interested in and impressed by the beverage itself, not the branding.

“It gave us an opportunity to really dive deep and do a rebrand from the ground up,” Allison Ellsworth said. 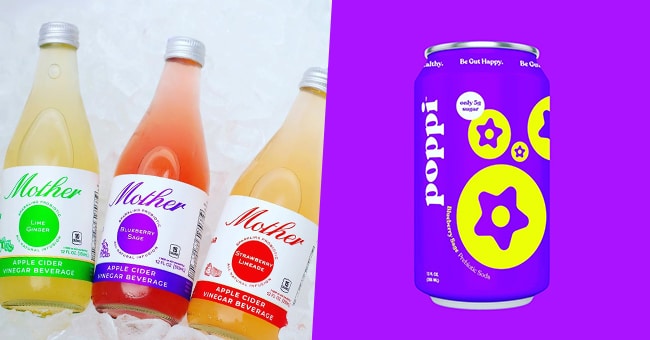 Through focus groups and consumer surveys, the team worked to identify its core value proposition, realizing subsequently that Mother “wasn’t the most approachable product.”

“Vinegar is polarizing,” said Stephen Ellsworth. “With the rebrand we wanted a name that resonated with consumers.”

Previously referring to its product as an “apple cider vinegar beverage,” under the Poppi rebrand it’s now categorized as a “prebiotic soda.” According to Stephen, the name is a play on “soda pop” meant to emphasize the brand’s new positioning as a better-for-you soda.

The colorful “art-driven” aesthetic was developed with CAVU’s branding team with the intent to “open the door to get people to try it,” Allison Ellsworth said. Though they first tried using the new branding on Mother’s 12 oz. glass bottle format, she said consumers in focus groups immediately gravitated toward 12 oz. cans instead. Stephen Ellsworth added that the switch to cans also reflected the brand’s focus on sustainability. 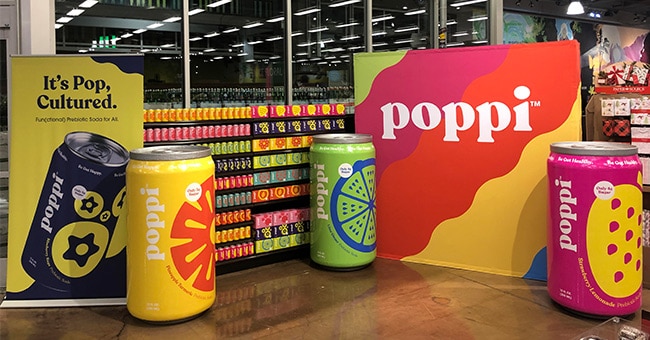 During the nearly year-long rebrand process, Stephen said Mother “pulled back” on distribution and turned away opportunities for expansion; as a result, the team had to re-pitch Poppi to retailers such as Sprouts and Whole Foods. The Poppi team then previewed the rebrand at a Whole Foods pop-up in Venice, California for the Shark Tank check-in late last year. This month, Poppi will be available nationwide in Sprouts and health club chain Life Time Fitness along with 50 Wegmans locations, to be followed by seven regions of Whole Foods in March, bringing Poppi’s door count to nearly 1,000 by the end of the first quarter. Stephen Ellsworth said Poppi will keep Mother’s suggested retail price of $2.99.

In addition to the core in-store offerings of Blueberry Sage, Lime Ginger and Raspberry Rose, the brand has also introduced its newest SKU, the caffeinated Peach Green Tea, at Sprouts and the Southwest region of Whole Foods. Allison Ellsworth said they’ll use consumer response to the flavor as a gauge of interest for a possible caffeinated line in the future.

The Ellsworths will also focus on establishing Poppi’s e-commerce business; last month, the company rolled out a revamped website with all seven products in its line-up available in 12-packs. A launch on Amazon is set to follow soon.

Stephen Ellsworth said he sees the rebrand helping to expand Mother’s consumer base, possibly to a younger audience. The team is currently working on new content to build out its social media channels, which Allison Ellsworth said was less of a focus with Mother.

“You have to think outside the box, you can’t do the same old, same old,” she said. “It’s wanting to be a brand more than just a product.”

With the new branding steering consumers away from the thought of apple cider vinegar being simply “medicinal,” Allison said the team ultimately hopes to emphasize that “there’s no limit” to the drink’s daily use occasions.

“Becoming that replacement isn’t so far off from where we are now with this new packaging,” said Allison. “I don’t think we could have gotten there with Mother.”