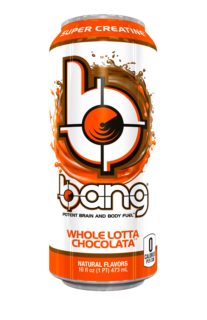 WESTON, Fla. — Bang Energy is known for leading the energy drink category with new and innovative drinks, and its latest energy drink could be the craziest concept yet! Bang Energy has released a chocolate-flavored energy drink called Whole Lotta Chocolata, which is a chocolate lover’s dream of galactic proportions! ​It’s a whole new way to taste chocolate with the energy you love from Bang Energy, containing 300 mg of caffeine plus EAAs, Super Creatine, and CoQ10.

Jack Owoc, CEO of Bang Energy, states, “Back in 2009, Sports Illustrated wrote an article I was featured in, and they referred to me as the ‘Willy Wonka’ of the supplement industry. The reporters observed our drinks’ manufacturing and research and development processes, but they were amazed at the flavors and samples I was tasting — which I still do today. I was quoted in the article saying, ‘All the mixing and taste-testing is part of my constant quest to stay ahead of the competition!’ Sports Illustrated nailed it.”

“Lately, I have seen many companies creating ‘energy recipes’ that include Bang Energy drinks, such as ice cream companies, blended fruit beverages, and cooking recipes,” Owoc says. “It just shows that if you create a premium, great-tasting beverage like Bang Energy, people will find innovative ways to use the product in their own creative way. Can you imagine the recipes that include chocolate incorporating Whole Lotta Chocolata? The possibilities are endless for chocolate lovers who want a boost of energy to use Whole Lotta Chocolata!”

Bang Energy has launched more than 38 groundbreaking, delicious flavors! To the consumers’ delight, Bang Energy continues to reinvent the flavor game, not only in the energy drink category but across all beverage categories worldwide! The company has literally caused all competitors to step up to a new standard of excellence. Its latest flavor innovation is the all-new Whole Lotta Chocolata sensation!

“It’s bold; it’s brilliant; it will blow your mind! Imagine a fizzy, crystal-clear creation that can only be described as a breakthrough Willy Wonka-like Whole Lotta Chocolata machination!” —Jack Owoc, CSO Bang Energy

Jack Owoc is the CEO and founder of Bang Energy and its extensive portfolio of allied brands. Bang Energy was founded in 1993 with one goal in mind: to produce the highest grade, university-proven sports supplements, and performance beverages in the world. Bang Energy has funded roughly 30 landmark, human-subject studies on its products, including Bang and Redline energy drinks, at UCLA, University of South Alabama, Florida State University, Baylor, University of Southern Maine, Memphis University, College of New Jersey, FIU, and other top universities in the country. For more information and daily trendsetting updates, workout tips, and supplement research, stay connected by following Jack Owoc on Instagram, @BangEnergy.CEO, visit Bang Energy’s website, Bangenergy.com, and follow Bang Energy on Instagram, @BangEnergy.

Lock in the Lowest Room Rate for BevNET Live