New York, NY
This is a past event. Replay all presentations and view upcoming events.

Honest Tea co-founders Seth Goldman and Barry Nalebuff will provide a special highlight during BevNET Live in Manhattan, speaking on the best practices for building and maintaining a partnership as entrepreneurs. The pair have been an open case study in partnership, exploring that idea, along with company leadership, structure, culture and tone in their business dealings and now in print. 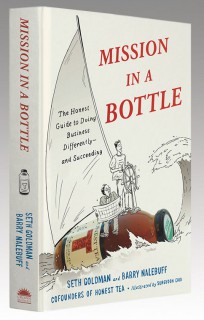 As is outlined in their widely-praised book, Mission in a Bottle: The Honest Guide to Doing Business Differently — and Succeeding, the pair brought different strengths to the partnership, but shared a common purpose: that a mission-based business could be profitable and successful while contributing something greater to the lives of people and the planet.

The pair came into the business from very different places in their lives: Goldman was working in finance for the Calvert Group, while Nalebuff maintained a position as a professor at the Yale School of Management. The situation may have been stressful, but the pair did not show it — as they wrote of the business, “You’ve got a professor and his former student, neither of whom had ever done anything like this. If it was such a good idea, why hadn’t someone—someone who actually knew something about the beverage industry—already done it? The truth is, we stumbled quite a bit and ultimately succeeded both because of, and in spite of, our ignorance.”

In their talk, Goldman and Nalebuff will explain how their partnership mitigated their lack of experience and supported the enterprise, how they tested it and maintained their success and friendship, and ways that entrepreneurs — both with and without co-founders — can create a leadership structure that helps their companies thrive rather than restricts its growth.

Barry Nalebuff is the Milton Steinbach Professor at Yale School of Management. An expert on game theory, he has written extensively on its application to business strategy. He is the coauthor of six books: Thinking Strategically and The Art of Strategy are two crossover books on game theory with over 300,000 copies in print. In Co-opetition, Nalebuff looks beyond zero-sum games to emphasize the potential for cooperating as well as competing. Why Not? offers a framework for problem solving and ingenuity. Lifecycle Investing provides a new strategy for retirement investing. Mission in a Bottle tells the story of Honest Tea. A graduate of MIT, a Rhodes Scholar, and Junior Fellow at the Harvard Society of Fellows, Nalebuff earned his doctorate at Oxford University.

In addition to his academic work, he has extensive experience consulting with multinational firms, from American Express, GE, and McKinsey to Google and Rio Tinto. He advised the NBA in their recent negotiations with the National Basketball Players Association and serves on the board of Nationwide Insurance. In 1998, Barry together with his former student Seth Goldman cofounded Honest Tea, a company that sells ready-to-drink iced tea that truly tastes like tea. In 2011, Coca-Cola purchased the company. His new venture is Kombrewcha, a slightly alcoholic version of kombucha; see kombrewcha.com. The motto is: Get Tickled, Not Pickled.

Seth Goldman is co-founder and TeaEO of Honest Tea, the company he co-founded out of his home in 1998 with Barry Nalebuff of the Yale School of Management. Today, Honest Tea is the nation’s top selling organic bottled tea, and is carried in more than 100,000 outlets.  The company has also enjoyed aggressive expansion of its Honest Kids and Honest Fizz product lines.  In March 2011, Honest Tea was acquired by The Coca-Cola Company, helping to further the reach and impact of Honest Tea’s lower-calorie, organic and Fair Trade mission.

The company continues to deepen its relationships with suppliers in India, China, and South Africa and has creative marketing partnerships with TerraCycle, Arbor Day Foundation and IndoSole.  In 2014 Seth was recognized by the United States Healthful Food Council with a REAL Food Innovator Award for helping change the food landscape by providing options that are healthier for both the body and the planet.Seth serves on the boards of the American Beverage Association, Bethesda Green, Beyond Meat, and the Maryland Economic Development Commission.

BevNET Live Summer ’14 is just one month away! Hundreds of attendees — including beverage companies, investors, distributors, retailers and suppliers — are already signed up for the event, which takes place on May 14 & 15 at the Metropolitan Pavilion in New York City. As the premier business and networking conference for the beverage industry, BevNET Live offers an unparalleled opportunity for beverage entrepreneurs of all stages to gain valuable information on current trends in financing, product development, distribution, retailing and much more. The conference will feature a stellar lineup of presentations and panels loaded with industry experts and veteran entrepreneurs as well as ample opportunities for networking, sampling, and strategy development.