SHEFFIELD, Mass., Dec. 9, 2015 /PRNewswire/ — Berkshire Mountain Distillers is proud to announce its newest endeavor, the Craft Brewers Whiskey Project, a project for which BMD will be distilling a multitude of different beers from a select group of craft brewers. The resulting whiskey, bound to be momentous, will then be aged at the distillery for an undetermined amount of time before it is released. Unlike BMD’s wildly popular Cask Finished Bourbon project that involved brewers such as Samuel Adams, Ommegang, Terrapin and Founders – where the cask finished bourbon was only available in the state of the brewery from whence the cask hailed – the whiskey from the Craft Brewers Whiskey Project will be available in multiple states. Release date – When it is ready! 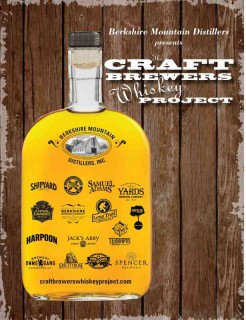 Selected Brewers and their beers/ales:

ABOUT BERKSHIRE MOUNTAIN DISTILLERS, INC.:
Established in 2007, Berkshire Mountain Distillers (BMD) has created a line of award-winning artisanal spirits including Greylock Gin, Ethereal Gins, Ragged Mountain Rum, Ice Glen Vodka, Berkshire Bourbon and New England Corn Whiskey, currently available in 19 different states. All products are handcrafted in small batches in Sheffield, Massachusetts at the Berkshire’s first legal distillery since prohibition. BMD is one of the founding members of the craft distiller movement and is embraced by several of the nation’s leading mixologists. Our products have received numerous high accolades including Gold Medal Awards from the Beverage Tasting Institute and San Francisco Spirits Competition and national praise from publications like GQ, Details, New York Times, Wine Enthusiast and Jim Murray’s Whiskey Bible. As supporters of local agriculture and business, BMD uses regional materials in many of our products, creating a truly authentic artisanal brand.  For more information and to find where BMD is available, visit www.berkshiremountaindistillers.com. Follow Berkshire Mountain Distillers on Facebook and Twitter.