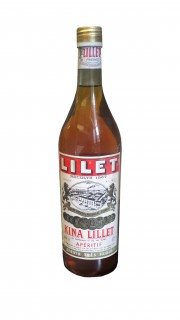 New York, NY (April 2015) – Lillet, the quintessential aperitif of Bordeaux, has recently discovered a vintage KINA LILLET bottle from 1967, one of the last bottles in existence. As of April 18, 2015, this artifact has entered the permanent collection of The Museum of the American Cocktail’s New Orleans location, which lives inside the Southern Food and Beverage Museum in New Orleans, LA.

Lillet is an iconic brand in the spirits community, established in 1872 in Podensac, France, a small city outside of Bordeaux. Every stage of production takes place at the Lillet distillery and has remained consistent throughout the years, evolving only slightly to reflect oenological advancements and technical improvements. The secret ingredients remain unchanged; and the proprietary recipe is closely guarded by the cellar master, ensuring Lillet’s iconic status as the quintessential aperitif of Bordeaux.

This KINA LILLET bottle from 1967 unveils many of the cultural differences throughout the French brand’s history, most notably the addition of Kina in the name. When Lillet was first established in the late 19th century, quinine, an ingredient that is still used in Lillet’s formula today, was an important and popular ingredient of the time since it was used to fight fevers and ease Malaria symptoms.

In the early part of the 1970s, Maison Lillet removed Kina from the brand name calling it simply Lillet. Kina, which derives from Quinquina, had become a generic term used by many aperitifs to reinforce its quinine content and was no longer relevant for the times.

As for the spelling of Lillet with one L or two, Lillet was a family name and the Lillet brothers wanted their name to be pronounced correctly: LL which was pronounced “ye” not L. This vintage is also particularly notable as 1967 was considered a good harvest year for the Sauternes region, one of the locations Lillet sources their grapes.

KINA LILLET was made even more famous worldwide when James Bond requested a martini made with KINA LILLET in Casino Royale in the 1950s. This rare bottle from 1967 will remind cocktail enthusiasts and visitors of the Museum of the American Cocktail the important place Lillet had in pop culture.

“We were astonished when this vintage KINA LILLET bottle from 1967 was found. As one of the last known bottles in existence, it is serendipitous that the Museum of American Cocktail was opening within the Southern Food & Beverage Museum,” said Lillet Brand Manager, Laurence Costa. “We’re glad that we are able to contribute such an important piece to this outstanding organization which celebrates cocktail culture and history.”

Visitors of Museum of the American Cocktail (MOTAC) will be able to see the 1967 KINA LILLET bottle as part of their Lost Spirits exhibition. MOTAC will use the vintage bottle to help tell the story of the martini—its development and evolution, from the Martinez to the Vesper and beyond. It will occupy a central place in the narrative and will be featured with other key artifacts.

The bottle will also be a part of the museum’s traveling collection to be displayed at MOTAC’s Los Angeles collection as they celebrate the history of the aperitif in a seminar on May 11, 2015.  The Museum of the American Cocktail is open in the Southern Food and Beverage Museum at 1504 Oretha C. Haley Boulevard, New Orleans, LA, and is open to the public Thursday through Monday from 11am to 5:30pm. Admission is $10 for Adults; $5 for Students (with ID) and seniors over 60. Children under 12 accompanied by an adult are admitted Free.

Lillet is the classic apéritif from Bordeaux and a staple of sidewalk cafes and early evening cocktail parties across France. First created in 1872, Lillet is a blend of wine and citrus liqueurs, carefully crafted and aged in oak to impart a soft and rich character.  Currently available in three varieties, Lillet Blanc, Lillet Rouge, and Lillet Rosé, Lillet is considered the ultimate summer apéritif.  Lillet Blanc has a golden color and a floral nose with hints of honey, candied orange, lime, and fresh mint, while Lillet Rouge has a ruby color, a raspberry nose and contains hints of blackberry, cherry vanilla, cinnamon, cardamom, and ginger.   Lillet Rosé has a subtle pink color, a lush fruity nose with tastes of ripe summer berries, wildflowers, melon and stone fruit, as well as traditional sweet and citrus notes.  All three expressions have an ABV of 17% and an RRP of $19.99.  Lillet is distributed in the United States by William Grant & Sons.  For more information, visit www.lillet.com

William Grant & Sons, Ltd. is an independent family-owned distiller headquartered in the United Kingdom and founded by William Grant in 1887. Today, the luxury spirits company is run by the fifth generation of his family and distills some of the world’s leading brands of Scotch whisky, including the world’s most awarded single malt Glenfiddich®, The Balvenie® range of handcrafted single malts and the world’s third largest blended Scotch Grant’s® along with iconic premium spirits brands Hendrick’s® Gin, Sailor Jerry® Rum, Tullamore D.E.W. Irish Whiskey and Milagro® Tequila.

ABOUT THE MUSEUM OF THE AMERICAN COCKTAIL

The Museum of the American Cocktail (MOTAC), a division of the nonprofit SoFAB Institute, celebrates a singular cultural icon and develops its craft, field, and market through exhibits, programming, and a range of media. Founded by craft cocktail pioneer Dale DeGroff and a group of cocktail authorities and historians, MOTAC advances the profession and expands consumer knowledge of mixology while stressing the importance of responsible drinking. Though well-known for its New Orleans collection, MOTAC maintains a second permanent collection in Los Angeles and regularly presents both consumer-focused and trade-oriented programs in Los Angeles, New Orleans, New York, and Washington, DC. MOTAC also works to boost career opportunities in the spiritsindustry and encourage greater participation by women and others under-represented in the field. For more information, visit cocktailmuseum.org.