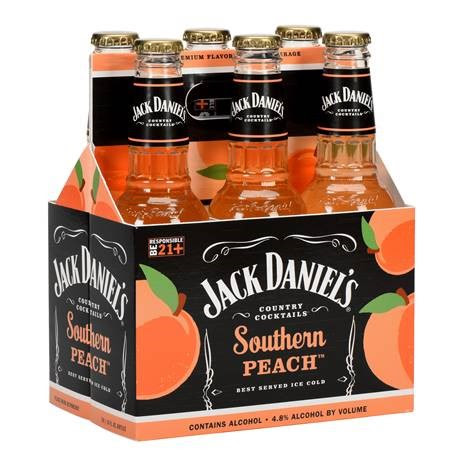 “Jack Daniel’s is a brand with rich history. Also being from Tennessee, I’ve always appreciated how JD falls in line with my southern values,” said K. Michelle. “This collaboration with Jack Daniel’s Country Cocktails is a celebration of all those values, and I’m excited to share that with my fans.”

Jack Daniel’s and K. Michelle have a deep history, starting with shared roots in Tennessee, and with the singer being a longtime fan of the brand. Building upon an initial partnership with Jack Daniel’s Tennessee Honey, K. Michelle worked closely with Jack Daniel’s to craft the newest Country Cocktails flavor. She was involved in the process from start to finish, which included the creation of the custom gold crown cap, exclusive to the Southern Peach flavor.

For more Jack Daniel’s Country Cocktails news and updates visit JackDaniels.com/Country-Cocktails or like the brand on Facebook (Facebook.com/JDCountryCocktails).

K. Michelle is a chart topping, award-winning R&B recording artist, songwriter, TV personality and entrepreneur. Known to millions as a cast member on the hit VH1 series Love & Hip Hop: Atlanta and New York, K. released her debut album Rebellious Soul in 2013 to wide critical praise. Spawning the hit “Very Special (V.S.O.P),” the album debuted at #1 on Billboard’s Top R&B/Hip-Hop Albums Chart and #2 on the Billboard 200 Album Chart. In 2014, K. followed up with her acclaimed sophomore smash Anybody Want To Buy a Heart which bowed at #1 on Billboard’s R&B Album Chart, eventually becoming the “best-selling female R&B album of 2014”, and placed among Rolling Stone Magazine’s “Top 20 R&B Albums of the Year.”

Alongside those achievements she received a Soul Train Award for “Best New Artist” and an NAACP Image Award for “Outstanding New Artist.” More Issues Than Vogue, K.’s third studio album released in 2016 and debuted at #1 on Billboard’s R&B/Hip-Hop Chart, marking her third consecutive #1 album on the R&B charts. The album’s first single, “Not A Little Bit,” received wide critical praise from the likes of Vibe and Idolator and was followed by her highly successful Hello Kimberly 2016 North American summer tour which sold out club venues nationwide.

Outside the music world, K. has also established herself as a successful business owner and brand. In the summer of 2016, she opened her own restaurant called Puff Lounge, a chic, Atlanta based establishment that includes a selection of 50 different drinks, upscale soul food and tapas. Her relationship with Jack Daniel’s began in 2015 during her My Twisted Mind Tour, where fans were treated to VIP experiences and signature cocktails from a specially-crafted Jack Honey menu. 2017 will see the release of K.’s highly anticipated 4th studio album on Atlantic Records.

Contract manufacturing for spirit and malt-base...