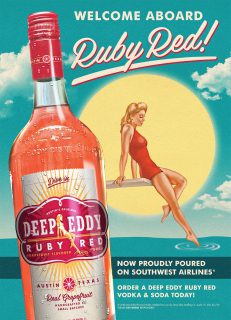 Both Deep Eddy and Southwest are known as differentiators in their respective categories, offering refreshingly unique experiences to their customers. Since the brand’s launch in 2010, Deep Eddy has grown to more than one million cases and continues to invigorate the vodka category with its innovative approach. Deep Eddy is ten times column-distilled in small batches, gluten free and uses only the finest natural ingredients.

Now flying to 100 destinations in the United States and ten additional countries, Southwest is the nation’s largest carrier in terms of originating domestic passengers boarded.

“Southwest Airlines is thrilled to add another product from the Deep Eddy family to our onboard drink offerings,” said Steven Murtoff, Senior Director of Inflight Operations Onboard Experience & Policy for Southwest Airlines. “We are committed to providing our Customers the best onboard experience, and our beverage menu just got sweeter with the addition of Deep Eddy Ruby Red Vodka.”

Featured on in-flight menus, Deep Eddy Vodka and Deep Eddy Ruby Red may be purchased for $7.00 with a major credit or debit card or valid Southwest drink coupon in Southwest’s cashless cabins.

Dive in and appreciate the authentic flavor of Deep Eddy Vodka available in-flight.

Deep Eddy Vodka (70-80 proof), based in Austin, Texas, is the second fastest-growing super-premium vodka brand in the US (Nielsen). Deep Eddy has received the Impact Hot Brand Award for four straight years and is recognized for its unique production process and incorporation of real, natural ingredients in its flavors. All Deep Eddy Vodka products are distilled in small batches at its state-of-the-art Texas distillery. The company’s line of products include: Deep Eddy Straight Vodka, Deep Eddy Sweet Tea Vodka, Deep Eddy Ruby Red, Deep Eddy Cranberry, Deep Eddy Lemon, Deep Eddy Peach and Deep Eddy Orange. Deep Eddy Vodka is available in stores in all 50 states. More information on the company can be found at www.deepeddyvodka.com or www.facebook.com/deepeddyvodka.