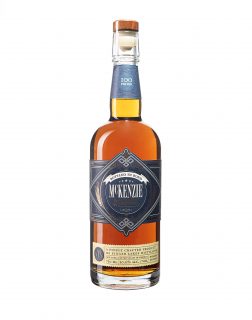 BURDETT, N.Y.—Finger Lakes Distilling is pleased to announce the release of a new whiskey, McKenzie Bottled-in-Bond Wheated Bourbon. This spirit is made from local corn (70%), red winter wheat (20%), and malted barley (10%). It meets the strict requirements of the Bottled-in-Bond Act: the product of a single distillery from a single distilling season, aged a minimum of four years, and bottled at 100 proof or 50% alcohol by volume.

In an area known for wine production, Finger Lakes Distilling has made a mark by producing their flagship line of McKenzie Whiskeys for 10 years now. A pioneer in theNew York State distilling movement, the company crafts whiskeys from local grain, controlling all aspects of production.

McKenzie Bottled-in-Bond Wheated Bourbon joins the other nationally-acclaimed McKenzie Whiskeys which include McKenzie Straight Rye Whiskey, McKenzie StraightBourbon Whiskey (rye recipe), and McKenzie Pure Pot Still Whiskey. It is available in the distillery’s tasting room, as well as select retailers in NY, NJ, CA, NV and AZ at a suggested retail price of $42.99.

The distillery has plans to continue to expand their whiskey offerings through limited releases with unique mash bills and barrel finishes, as well as a single malt whiskey that begins to hit the 10-year age mark in 2019. More information about the distillery can be found at www.fingerlakesdistilling.com.