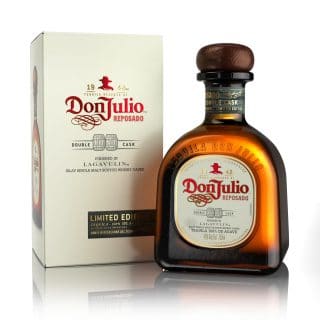 Made in collaboration with Colin Gordon, the Lagavulin Distillery Manager, the latest variant to the portfolio is a rich and nuanced expression of Tequila Don Julio Reposado now finished in casks which previously held one of the most treasured Single Malt Scotch Whiskies – Lagavulin Islay Single Malt Scotch Whisky – known for its full bodied, bold flavors derived from the small island of Islay, home to the Lagavulin distillery.

Since Don Julio González revolutionized the tequila industry in 1942 when he began producing the spirit, the brand has always sought to deliver innovative offerings that are also representative of the quality that Tequila Don Julio has been known for. Master Distiller Enrique de Colsa, spent two years perfecting this innovation, constantly experimenting with the vast cask options available within the Diageo portfolio. He landed on casks which previously held Lagavulin Islay Single Malt Scotch Whisky as it embodies the finest, pungent flavors native to the region that blended well with the traditional Tequila Don Julio Reposado.

Master Distiller Enrique de Colsa commented, “Working in collaboration with Colin Gordon at the Lagavulin Distillery allowed me to perfect this variant, using our expertise to ensure that both spirits authentically complemented each other and balanced the core flavor of Tequila Don Julio as well as the signature flavor of Lagavulin Single Malt Scotch Whisky. After two years of working on this variant, I’m proud to introduce it to the U.S. as a limited-edition variant created for the tequila and whisky connoisseurs with an incredibly unique flavor profile that is excellent enjoyed responsibly neat or on the rocks.”