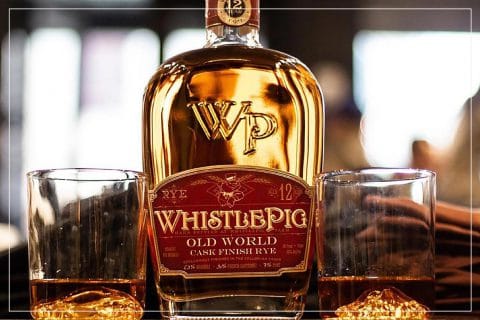 The four chefs who helped create WhistlePig X Flaviar Chef’s Blend 2019are Michael Gulotta of MOPHO/Maypop fame in New Orleans; Jamie Malone from Minneapolis’ stunning Grand Café; David Posey – one half of the dream team at Elske, Chicago; and Justin Woodward of Castagna in Portland.

The four James Beard Award-nominated chefs worked together at the WhistlePig Farm in Shoreham, Vermont to create WhistlePig X Flaviar Chef’s Blend 2019back in June this year.

Perhaps unsurprisingly, given this was a blend created by chefs at WhistlePig, it is comprised entirely of wine casks. WhistlePig X Flaviar Chef’s Blend 2019is made up of 40% Madeira, 30% Sherry, 20% Port and 10% Sauternes – all drinks traditionally accompanied with food. The result is a complex, unique whiskey offering.

Each of the chefs will host a special food pairing dinner in their respective restaurants for Flaviar members in September 2019 before WhistlePig X Flaviar Chef’s Blend 2019is released in October 2019 exclusively via Flaviar.com.

Pete Lynch, Master Blender at WhistlePig, comments: “Madeira, Port and Sauternes are the magic trio in our WhistlePig 12, and the chefs’ decision to add Sherry Cask Finished Rye so prominently to the WhistlePig X Flaviar Chef’s Blend 2019takes that trio to a place we’ve never before seen. The blend showcases a rich complexity with subtle nuances, adding a great Sherry derived spice and nuttiness, and tremendously deepening the flavor profile. This is definitely a whiskey you don’t want to miss out on.

Grisa Soba, co-founder of Flaviar.com adds: “The process of blending a whiskey has much in common with the creative process of creating a menu and so we thought it would be an interesting experiment to take four incredible chefs, who are real bastions of flavor, and have them play around with the blend of a new whiskey expression. The collaboration is another way for us to challenge our members to try more new things, more often and to offer Flaviar members amazingly memorable food pairing dinners with some of the most respected chefs of the moment.”

Talking about why she got involved with the Chef’s Blend project, Jamie Malone, owner and head chef at Grand Café, said:“It was nearly an impossible thing to say no to this project when asked. It’s a dream come true”. David Posey, Executive Chef & owner atElske, agrees,“They asked me if I would like to participate with some other amazing chefs to help blend whiskey from one of my favorite distillers, so I couldn’t say no.”

Referring to the most challenging aspect of the blending process, Michael Gulotta, Chef Proprietor of MOPHO/Maypop, comments:“The realization that a small percentage change in the base spirits can drastically alter the final taste and finish of the whiskey made the blending an exceptionally difficult task.” Malone, adds:“I was incredibly surprised to learn and taste and smell how the different barrel finishes interacted with each other. In many ways to results were very unexpected, not exactly the sum of their parts, but much more complex.”

The most challenging element for Justin Woodward, Executive Chef of Castagna, was“Just deciding which one I enjoyed most. Starting with such great bases makes blending easy,”he explains, “but choosing a final blend was the most difficult aspect.”

All the chefs will host a special dinner in their respective restaurants exclusively for Flaviar members in September 2019 and each have their own top tips for creating whiskey food pairings: Gulotta advises: “to build dishes that accentuate and draw out the sometimes muted flavors in the whisky, like vanilla, caramel, winter spices, and dried fruit.”

Malone counsels: “When pairing, you need to remember to pair with things that have a similar weight, or loudness so neither gets lost. Both simple flavors, like cream, and complex flavors like shellfish stock pair beautifully with whiskey, because they all speak in the same ‘volume’ – loudly”.

Posey suggests:“Whiskey is a tougher pairing than wine, beer, or cider just because of the alcohol, so it needs food that can stand up to that and help cut through. Fat and acid work best with food against straight whiskey, much like using acid or sugar (instead of fat) in a cocktail. Pairing with whiskey is the time to use heavier proteins and stronger, more forward sauces”. For Woodward, it all boils down to one thing‘Balance”.

“On the nose, plums, cherries and vanilla, with gentle cinnamon aromatics. The palate is spicy, with pipe tobacco and honey up front, giving way to dark fruits, and has a wonderful velvety texture. The finish is long and fruity, with a fantastic burst of Rye spice.”

David Posey is one half of Chicago’s culinary power couples, David and Anna Posey opened Elske in 2017, where David serves as executive chef and Anna as pastry chef. Both David and Anna previously worked for One Off Hospitality. David was the Chef de Cuisine at Blackbird, where he was a James Beard Award Finalist for Rising Star Chef in 2013 and 2014. After graduating from the Culinary Institute of America in Hyde Park, David eventually worked at Grant Achatz’ Michelin-Starred Alinea, before working his way up the ranks at Blackbird. Meaning the Danish word for “love,” Elske has now earned two Michelin stars and was the 2018 James Beard Finalist for Best Chef in the Great Lakes category.

Born and raised in New Orleans, Michael Gulotta began cooking in local restaurants at a young age. After graduating from the Chef John Folse Culinary Institute, he joined the newly opened Restaurant August. Gulotta then took leave to train in the Italian Riviera and Germany’s Black Forest. When Hurricane Katrina hit, Michael returned home to help rebuild and assist with August’s re-opening.

Jamie Malone has always had a life that revolves around food. She grew up cooking and baking bread with her dad in St. Paul, Minnesota. Before receiving her culinary degree from Le Cordon Bleu, Chef Malone traveled and studied extensively in Hong Kong, Singapore, Vietnam, and Europe, immersing herself in each region’s cuisine.

Malone began her cooking career in hospitality in 2006 working for Chef Tim McKee at the highly lauded restaurant La Belle Vie, in Minneapolis, Minnesota. She moved on to be a part of the opening team of several Minneapolis restaurants early in her career, including Georges Chambers Kitchen, Porter and Frye, and Sea Change.

In 2011 she took the position of Chef at Sea Change. There, Malone gained national attention and earned a place as a semifinalist for the James Beard Award Foundation’s “Rising Star Chef” for 2013 and “Best Chef Midwest” for 2014, 2015 and 2018.  In 2013, Malone was named one of Food and Wine magazine’s “Best New Chefs”.

In 2017 Jamie opened her first restaurant Grand Café, in 2018 it was a Semi Finalist for the James Beard Award Foundations “Best New Restaurant, and was also named Food and Wine magazine’s “Best New Chefs”.

Known for continually pushing the boundaries of fine dining in Portland, Justin Woodward joined Castagna in 2009 and took on the role of executive chef in 2011. He brings with him a wide range of culinary experience, having worked for some of the world’s most esteemed restaurants, including Chef Rene Redzepi’s Noma in Copenhagen, Denmark, San Diego’s L’Auberge Del Mar, and Chef Andoni Luis Aduriz’s famed modernist establishment Mugaritz in San Sebastian, Spain.?Before arriving at Castagna, Woodward worked under renowned pastry chef Alex Stupak at New York’s WD-50.

Woodward is passionate about combining ancient and modern culinary techniques, drawing inspiration from the seasons and Oregon’s bounty of locally grown and foraged ingredients. He was nominated for the James Beard Foundation’s Rising Star Chef of the Year award in 2013, and was a finalist for the Best Chef Northwest award in 2015, 2016, 2017, 2018, and 2019. He is also a winner of the 2018 StarChefs Portland Rising Stars Award.

Founded in 2008, WhistlePig is the premier aged rye whiskey, featuring the bold and often untapped flavor of rye. WhistlePig is leading a surge of innovation in the emerging field of North American whiskey. As the most decorated rye whiskey – having received the coveted ‘Best in Show Whiskey’ title from the 2017 San Francisco World Spirits Competition, WhistlePig is widely viewed as the world’s finest Rye. With the opening of its distillery on its 500-acre Vermont farm in the fall of 2015, WhistlePig has also become one of the leading farm-to-bottle rye whiskeys in the world.www.whistlepigrye.com

Founded in 2012, Flaviar is the world’s largest premium spirits club, with operations in the US and Europe. Flaviar offers a better way to experience fine spirits. Flaviar members enjoy a full suite of benefits including quarterly tasting boxes and full-size bottles sent directly to their home, invitations to exclusive spirits events, access to rare and original spirits available only to members, free shipping, over 200K member reviews and more.  Flaviar is here to help more people try more new things more often. Flaviar membership is $300 per year, or $95 a quarter. For more information visit www.flaviar.com