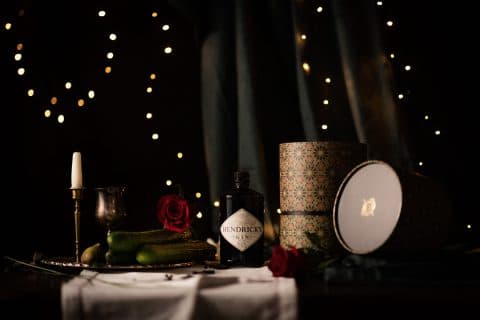 Dublin-based, Atkins is perhaps best known for her collaborations with Wes Anderson on The Grand Budapest Hotel (2014), for which she received an Oscar for Best Production Design, and Isle of Dogs (2018). Atkins has worked on graphics from many bygone eras and her favourite design period is Victoriana London, making Atkins an ideal collaborator for Hendrick’s Gin, as its iconography and indeed its flavour profile is heavily inspired by this age, which was an era of freethinking innovators and visionaries.

Atkins was given creative free reign to craft something spectacular and chose to create a Zoetrope, an early form of animation technology that seems to bring still images to life when observed through the vertical slots of a cyclical drum. The word zoetrope descends from the Ancient Greek meaning ‘wheel of life’ and was a popular Victorian Parlour toy designed to entertain and amuse.

Explaining how she approached the project, Annie Atkins, Designer of the Hendrick’s Gin Zoetrope, said: “I immediately wanted to work on the project—there’s something so fun about an open brief. This project had a lot of room for imagination and I knew I could bring my prop making experience to it. I wanted to make something low-fi and low-tech that was easy to use and something that you could have fun with.”

Atkins continues: “I love the shape of the Hendrick’s Gin bottle—it’s very different to other gin bottles and I wanted to create something that reflected that solid, cylindrical shape.

“I thought about a box turning into something fun and how it could relate to the Victoriana style of Hendrick’s and its lovely use of steampunk meets unusually futuristic but old-fashioned motifs. When I thought of the Zoetrope, everything clicked into place.”

Talking more about the design, Atkin said: “Researching the animations from the 19th Century, we discovered that the simple ones work best, like a horse jumping or a fox in box. Foxes especially relate to Hendrick’s and the anthropomorphic themes of Victoriana.

“I wanted to do a repetitive festive pattern with another worldliness and a magic feeling. It looks like gift wrap, because it’s ultimately a gift that will be delivered to people.”

Atkins is herself partial to a Hendrick’s Gin & Tonic and her mysterious packages will be delivered to 200 fellow Hendrick’s loving unusualists across the globe in time for the holiday season. The curiously odd invention will surprise and delight as, upon first glance, it may look like a bottle of Hendrick’s Gin encased in a sumptuous rose and cucumber-inspired box, but it is, in fact, so much more than meets the eye.

When the curious recipients open their delivery, they’ll not only find a bottle of Hendrick’s finest gin, they will also stumble upon a rather remarkable Hendrick’s Gin Zoetrope beneath. The Victoriana-inspired early animation device has been beautifully designed by Annie Atkins, complete with a series of hand-drawn animations to watch while you savour your tipple.

Discussing the coup de grace of her design, Atkin said: “When we hit on taking the cork out of the Hendrick’s Gin bottle and using it as a handle to spin the Zoetrope, so that it becomes something to use when you’re enjoying a Hendrick’s Gin, it tied the whole piece together.”

“The Hendrick’s Gin Zoetrope is a magical gift that will transport its lucky recipients into an unparalleled world of curiosity,” said Lisa Fitzsimons, Global Marketing Manager, Hendrick’s Gin. “We couldn’t consider a more fitting and curious collaborator than Annie Atkins who meticulously brings fantastical worlds to life with her designs for some of our favourite
whimsical films—she has artfully done the same with this inventive creation.”