California Juice Company is a purveyor of cold-pressed juices that are packaged in both full-size ready to drink form as well as a smaller shot format. The shots, which are what we are exclusively looking at in this review, recently got a packaging makeover. 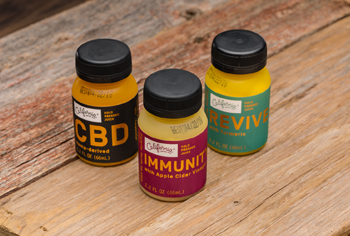 Previously packaged in a slightly smaller and slimmer looking bottle, the shots are now packaged in a squat 2.2 oz (66ml) bottle with a black cap. Their shot line features four flavors, including Revive, Focus, CBD (with 10mg of hemp-derived CBD), and Immunity.

From a flavor perspective, they’ve done a great job formulating all four of these products. Believe it or not, the CBD variety is, despite its lack of any flavor descriptors on the front panel, the best tasting flavor of the bunch. It features coconut water, turmeric, lemon, ginger, honey, black pepper oil and cayenne, which makes for a flavor that’s slightly sweet, slightly spicy, and full of turmeric flavor. Second to that is Focus, which is made with four simple ingredients: orange, organic ginger, organic turmeric, and habanero. It, too, has notes of sweet, spice, and citrus in a formulation that’s really well balanced.

The final two flavors, Immunity and Revive, offer more intense flavor profiles that are much more in line with other cold-pressed shots. Immunity is made with organic ginger, organic lemon, apple cider vinegar, and cayenne. It has heavy notes of the vinegar and cayenne and definitely packs a punch. The same can be said for Revive, which is made with organic coconut water, lemon, organic ginger, and organic turmeric. While we can’t really taste the coconut water, the other three ingredients add some bold flavor.

Our final point about the formulations of these products is their functionality. The CBD variety, which is named after an ingredient rather than a function, is the only one that really has a quantifiable element to it in that it has 10mg of CBD. The other products are largely just going off of what the ingredients are known to be good for. But they don’t connect the dots for the consumer, so you are either in the know and trust these ingredients or you don’t.

The above being said, we wonder if the products wouldn’t be better off being named and positioned off of the ingredients. This would make the entire line consistent with the CBD product and it would probably make the process of choosing a bit easier for the consumer.

Otherwise, we really like the overall look of these products. The label, which uses a single accent color along with gold metallic ink, looks polished and sophisticated. It’s also pretty easy to read and generally intuitive as to what the product is (aside from our concern about functionality above). They’ll certainly stand out if placed alongside the other shots that are currently on the market.

Overall, we think that California Juice Co. has done a great job giving their shot lineup an upgrade.