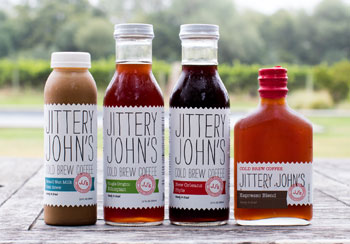 Jittery John’s is a Berkeley, Calif.-based company that offers a diverse line of cold-brew coffee offerings. They have seemingly every type of cold-brew covered: ready to drink, nitro, concentrate, office delivery, single origin, New Orleans style, and even a high pressure processed (HPP) variety with Brazil nut milk. The only thing missing are flavored offerings, but it’s a toss up as to whether they really need that at this stage of the game.

The branding and packaging are one of the strong points of Jittery John’s. The label uses a zigzag edge that’s reminiscent of something that was cut with pinking shears. It’s white with black hand-drawn lettering, which fits the style of something that’s made in small batches. They’ve done a nice job of establishing a minimalist look to the label while still communicating everything the consumer needs to see. While the bottle formats vary between some of their offerings, the products look consistent and part of the same brand, which is definitely good.

In terms of the flavors, we sampled a variety of their ready to drink offerings. There were two that really stood out:

If there’s any suggestion for the brand, it’s to figure out what the focal point of the brand is going to be. Having the ability to produce all of these different formats is definitely a great way to test the waters, but at some point we’d imagine that stepping on the gas in one direction is going to be key.

Overall, Jittery John’s has done a nice job of creating well-executed products that could definitely serve as the foundation for something that has some legs to it.