This brand is no longer available

Saratoga Juice Bar, which is both a New York-based juice retailer and a manufacturer of cold-pressed juices, has taken its brand into a new category: shots. 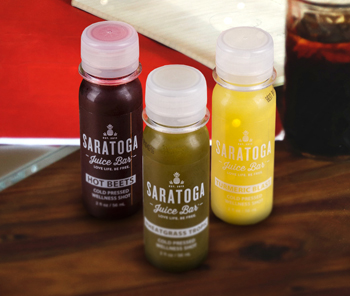 The cold-pressed / high pressure processed segment of the shot category is still a relatively young concept. This is both a good thing in that Saratoga will have less clutter to cut through, but it’s also adds a near term challenge in that the shelf space for this category isn’t as defined as it is for full size juices.

Their initial lineup, which includes Turmeric Blast, Wheatgrass Tropic, and Hot Beets, gives consumers options that were inspired by familiar cold-pressed juice flavors. They’ve packed loads of flavor in each one of these products while only using three to four ingredients per formulation. Given the lack of real estate on these small 2 ounce bottles, having a super short ingredient list is an approach that we can’t disagree with. And from a taste perspective, each one of these products is well-executed, packing a flavorful punch into a small format.

On the packaging and branding front, what they’ve created is functional, practical, and intuitive -- at least for now. The question we have for this product, which is exactly the same question we have for their cold-pressed juice line, is whether or not the brand has enough of a strong brand to really form a connection with the consumer. The risk, for now, is that something better may come along (something that builds a loyal consumer base) and could relegate Saratoga to being a commodity player.

To that end, there’s nothing about Saratoga’s formulation or packaging that another juice company couldn’t do. Right now, there are only a handful of brands doing what they do so there’s some first-to-market time to work with, but they’re definitely going to need to innovate and evolve if they want to compete in the long term.