LAWRENCEBURG, KY (April 2, 2015) – From the Gold Coast of California to the bustling streets of the Big Easy, Wild Turkey® today announces the #Nevertamed Bourbon Tour – a 360-degree “distillery on wheels” that will educate and entertain Bourbon lovers across the United States. With demand for America’s native spirit at an all-time high, the whiskey brand is bringing its Kentucky roots on the road to meet with bartenders and fans who have a keen passion for Bourbon and Rye.

Jimmy and Eddie Russell – both Bourbon Hall of Famers™ and the only father and son Master Distilling duo in the industry – will make special appearances throughout the tour to share their combined 95 years of Bourbon-making experience. From an innovation standpoint, the #Nevertamed Bourbon Tour will also serve as a platform to introduce new products to the market, including Wild Turkey Master’s Keep, Russell’s Reserve Single Barrel Rye and Russell’s Reserve 1998. Granting a first-ever look to a select group of VIPs, these three expressions are some of the most sophisticated whiskies in the history of Wild Turkey. 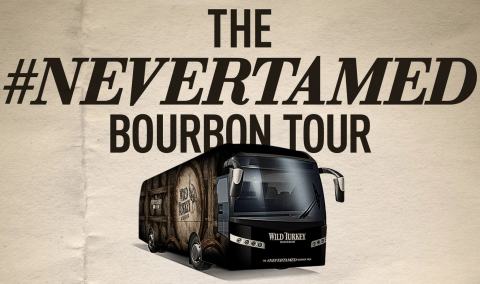 Kicking off at Deep Ellum Arts Festival in Dallas on April 3, whiskey lovers of legal drinking age can immerse themselves in a bus-sized replica of the famed Wild Turkey Visitor Center in Lawrenceburg, Kentucky. The 50-foot bus offers a behind-the-scenes glimpse into what makes Wild Turkey such an iconic American brand – from its history and place along the Bourbon Trail to the people and products who have catapulted it to global stature and success.

For party-oriented revelers along the cross-country route, the #Nevertamed Bourbon Tour also offers a well-deserved respite in the mobile bar & lounge featuring signature Old Fashioned cocktails. And, in the tasting room, visitors may sample a variety of Wild Turkey’s many award-winning whiskies while learning the complexities behind taste, smell, color and maturation from the experts.

From Dallas, the bus will make its way to the Kentucky Derby, where it will have a major presence at Kroger’s Fest-a-Ville, April 24 – May 1. Additional tour stops include New Orleans, Portland, San Francisco, Los Angeles and Chicago.

For a complete list of stops along the #Nevertamed Bourbon Tour, please visit http://www.nevertamed.com/#the-tour.