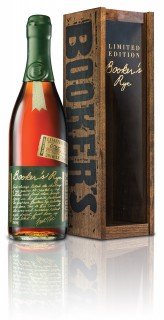 These special releases are each made from some of the last barrels laid down by the late Booker Noe in the final years of his life and will each be available as limited, one-time offerings. As the first rye whiskey ever offered from Booker’s Bourbon, Booker’s® Rye Whiskey was made from a very limited number of barrels of a previously unreleased rye mash bill in Booker’s signature uncut and unfiltered1 style. Knob Creek® 2001 Limited Edition Bourbon debuts as the longest-aged expression ever released from Knob Creek, the ultimate expression of the bourbon’s big, full flavor.

“When Dad helped pioneer the small batch movement nearly 30 years ago, he introduced a whole new way of thinking about how whiskey could be made — introducing small batch, high quality whiskies like Booker’s Bourbon and Knob Creek Bourbon with flavor like nobody had tasted before,” said Fred Noe, Beam Family’s 7th Generation Master Distiller. “Now, all of these years later, we’re excited to keep this tradition alive by giving our fans something really special with these two limited releases made from some of the last barrels Dad laid down. Dad knew exactly what he wanted when it came to making whiskey, and I know these releases would make him proud.” 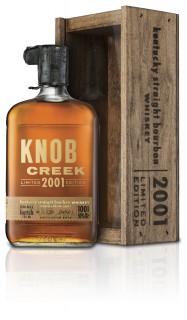 The hallmark of Booker Noe’s innovative spirit, Booker’s Rye Whiskey is made from a never before released rye mash bill, bottled uncut and unfiltered1 at its natural proof and full of robust flavor, just the way Booker preferred his whiskey. The supply of Booker’s Rye is about half that of Booker’s® 25th Anniversary Bourbon from 2014. Aged for 13 years, about twice as long as a standard batch of Booker’s Bourbon, Booker’s Rye is now available nationwide with an SRP of $299.99 for a 750ml bottle.

Like all batches of Booker’s Bourbon, Fred Noe watched over these barrels to ensure that the liquid was released the way Booker intended so many years ago. It was selected with the following characteristics:

Knob Creek 2001 Limited Edition Bourbon commemorates a significant year for Knob Creek, as late in 2001, the tradition and responsibility of stewarding Knob Creek Bourbon was passed from Booker to Fred — from father to son. This release, made from barrels that Booker laid down in 2001, was finished by Fred Noe in honor of all he learned from his father and stays true to the pre-prohibition standards that Booker sought to restore when he introduced Knob Creek Bourbon. Bottled at 100 proof and aged for 14 years, longer than any other Knob Creek release to date, this bourbon has an even bigger, fuller flavor than what Knob Creek fans have come to love. It will be released in three limited batches, each accentuating distinct notes of the 14-year-old liquid, for a suggested price of $129.99 for a 750ml bottle.

Booker’s® Bourbon was inspired by a 200-year-old family tradition and came to life when Booker Noe selected the first bottles of Booker’s as holiday gifts for his friends and family. With its instant popularity within Noe’s close circle, Booker’s Bourbon was soon after bottled and made available on shelves for everyone to enjoy. Booker’s Bourbon is one of the only bourbons bottled straight-from-the-barrel at its natural proof, which varies from batch to batch. It is crafted in small batches and aged for six to eight years in charred oak barrels, which are stored in the center of the rack house. Today, Fred Noe personally selects every batch of Booker’s Bourbon to ensure every bottle contains a robust, full-bodied whiskey that has a taste, aroma and proof that matches Booker’s whiskey preference.

Beam Suntory was created in 2014 by combining the world leader in bourbon and the pioneer in Japanese whisky to form a new company with a deep heritage, passion for quality, innovative spirit and commitment to Growing for Good. Headquartered in Deerfield, Illinois, Beam Suntory is a subsidiary of Suntory Holdings Limited of Japan. For more information on Beam Suntory, its brands, and its commitment to social responsibility, please visit www.beamsuntory.com and www.drinksmart.com.

1Booker’s® Bourbon and Booker’s® Rye Whiskey are quality screened to remove only pieces of charred barrel wood from the liquid.