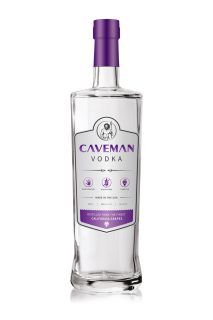 San Diego, CA – Caveman Spirits Company is excited to announce the launch of Caveman Vodka at the Paleo f(x)™ Virtual show on November 14, 2020! Move over potatoes and grains, there is a new Paleo inspired alternative coming soon to retail store shelves, a Vodka distilled from California Grapes. Handcrafted, naturally Gluten Free from the source, and infused with the passion to bring fun & celebration to those that follow the Paleo lifestyle.

The founder, Steve R Olsen, first discovered the benefits of the paleo diet after his brother developed prostate cancer. This shocking and unexpected news was a wakeup call to remind him and his family to make the most of their lives. Fortunately, his brother underwent treatment and is now cancer-free. To get back in shape and good health, Steve and his brother took it upon themselves to compete for a weight loss challenge. Using the Paleo method, Steve won the contest and the rest is history.

Danielle Walker is a New York Times bestselling author of the book “Against all Grain”. After battling her own health challenges, she attributes her recovery to the Paleo way of life. Danielle makes mention for the cocktail lifestyle “Cocktails are often synonymous with sugary syrups and artificial mixers, but I enlisted the help of my craft cocktail mixing brother, Joel.” (goodreads.com/work/quotes/24267950-against-all-grain-delectable-paleo-recipes-to-eat-well-feel-great)  Besides Tequila, the spirits industry is limited on Paleo based spirit options, and now Caveman Vodka is looking to fill that gap.

Steve tried the paleo diet (also known as the “Caveman” diet) at the recommendation of a coworker and lost five pounds in just one week. He read “The Paleo Diet for Athletes” by Loren Cordain and Joe Fiel (trainingpeaks.com/blog/a-quick-guide-to-the-paleo-diet-for-athletes/) and was soon living the paleo lifestyle full time. Shortly thereafter, Steve dropped another 25 pounds, gained strength and energy, and found a new outlook on living a healthy balanced life.

Whether you enjoy your cocktails weekly or in moderation, there are many celebrities and athletes that swear by the Paleo lifestyle. Whether it is Jessica Biel, Matthew McConaughey or NBA Allstar Grant Hill they all are   Paleo. Actor Channing Tatum, appears to enjoy his cocktails, he states “I’ll cheat on weekends and have some wine or vodka.” everydayhealth.com/paleo-diet/diet/celebrities-who-have-tried-paleo-diet/

Our Paleo ancestors had it right…. Long ago Cavemen were constantly on the run hunting and gathering or being chased by saber tooth tigers. “Listen up Paleo Dieters: Cavemen Drank!” words by Nick Hines vinepair.com/articles/paleo-drinking/ Today, the world is still moving fast and we now have the luxury of celebrating our achievements with a Paleo-inspired vodka, gluten-free from grape to bottle.

Caveman Vodka’s passion is to bring you great tasting vodka that is clean, smooth, and matches the “Work Hard – Have Fun” lifestyle! Make your comeback count and celebrate your achievements with Caveman Vodka!

More about Caveman Vodka: Proud to be launching with Speakeasy Company (speakeasyco.com) and will be available via Direct to Consumer in most states by ordering on CavemanVodka.com.

Caveman Vodka will be available at local retailers in Southern California soon.