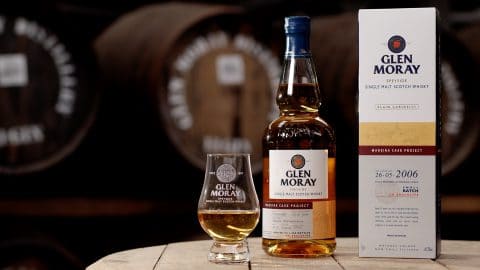 A single malt Scotch whisky fully matured in ex-sweet Madeira hogsheads for 13 years and 10 months, the expression is a rich and indulgent combination of Glen Moray’s classic Speyside style and the sweet fruit and toffee influences of Madeira.

Just seven of these casks were laid down in 2006, tucked away undisturbed in ‘Warehouse 1’ – home to the Elgin-based distillery’s maturation experiments over the years.

1468 bottles have now been released to the UK market as the third expression in the ‘Elgin Curiosity Range’, which aims to push the boundaries of single malt maturation and celebrate Glen Moray’s long standing passion for cask experimentation and flavour.

Dr Kirstie McCallum commented: ‘Single malt whisky matured in Madeira casks has been prized in the industry before, but typically the casks have only been used to ‘finish’ more conventionally matured whisky. That’s what makes this new expression so very special. Our new make spirit has been slowly mingling with the luxuriously sweet flavours of Madeira for nearly 14 years, giving a depth of flavour and an intense character that couldn’t otherwise be created. It’s a delicious dram, a dessert in a glass, and we are very much looking forward to sharing it with whisky drinkers in the UK.’

Madeira is made exclusively on the subtropical Portuguese isle that shares its name, just west of Morocco. Known for its nutty sweetness, balanced by a fresh, tangy acidity, it’s these rich notes that give the new Glen Moray expression its distinctive flavour.

Crafted since 1897 in the ancient town of Elgin, the capital of the Speyside whisky region, Glen Moray distillers have been curious about flavour throughout their history. Surviving handwritten ledgers show that a wide variety of casks were used to mature new make spirit back in those early days, which was an unusual practice for the time. A deep knowledge and expertise of wood has developed at Glen Moray through generations of distillers, resulting in today’s exceptional range of whiskies with a style to suit everyone.