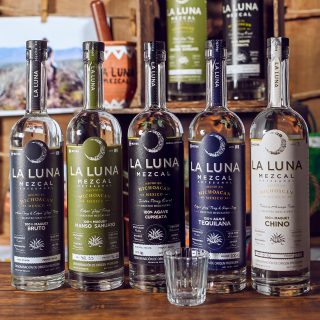 Sonoma, Calif. — Mezcal production spans nine states of Mexico, but upwards of 90 percent of U.S. imports come from the southern state of Oaxaca. Salvador Chavez, the CEO and founder of La Luna Mezcal, is trying to change that. Returning to his family’s home state of Michoacán in 2016, Chavez launched La Luna to represent one of the most abundant regions in Mexico. Now, the company is expanding distribution to 14 states with agave expressions rarely seen in the U.S. and a competitive bottling that offers a new and rich flavor palate for the mezcal cocktail experience.

La Luna, which means moon in Spanish, is named for the ancient practice of  harvesting agaves under the night sky. By working with small family producers that have harvested and distilled Michoacán’s agaves for generations, La Luna is helping to bring the region’s biodiversity and mezcal traditions into the spotlight.

This year the brand took home awards from the San Francisco World Spirits Competition for three of its recently released expressions. Accolades included a double gold for the Chino, a bottling of wild cupreata agave, the state’s main variety that thrives on mountain slopes. Also awarded was the Manso Sahuayo, distilled from an unspecified agave unique to the region, and the Tequilana, made with a mix of rare heirloom blue weber agaves and blue webers typically found in tequilas.

La Luna’s recent releases of four rare expressions complement a price-friendly cupreata bottle, its floral notes offering an alternative to smokier espadin mezcals, which dominate in the cocktail placement. Last month Forbes lauded the expression as a versatile cocktail or sipping mezcal in its “Guide to The Best 25 Mezcals.”

All its spirits are made artisanally with the agave hearts fire roasted in stone lined earth pits, macerated, fermented in open-air wooden vats before being double distilled in a copper and pinewood still or ancestrally in a clay pot still. All of the mezcaleros are members of the Scott and Perez families, who have been making mezcal in Michoacán for several generations.

The newest distillery is on the very property Chavez’s father was raised on in Cotija, a small ranching town where his grandfather traded agaves with the local mezcalero for liters of finished product.

“Becoming so immersed in my family’s history, land and Michoacan roots has driven me to make as much positive impact as possible in this beautiful state with La Luna Mezcal,” said Chavez. “By growing our brand we can make an important economic impact in all of the communities we produce in.”

As the producers of fine heritage spirits, Puente Internacional is the proud bridge to Mexican culture, traditions, and history through our products and expressions. Launched in 2017, Puente-Internacional represents the sugar cane distillate tradition in Michoacán with Gustoso Aguardiente, a 100% sugar cane rum, highlights neighboring Jalisco with Gran Dovejo, a  small-batch traditionally crafted premium tequila, and La Luna Mezcal.