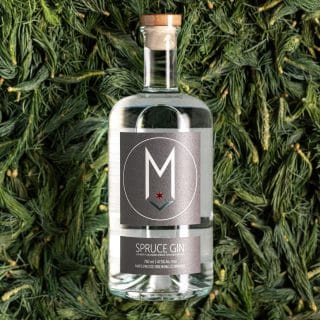 The first of its kind to establish brewing and distilling roots under a single roof, Maplewood Brewery & Distillery announces the release of their new Spruce Gin distilled from a blend of neutral spirits and malted barley.  The Spruce Gin is the Distillery’s first widely distributed product in their ever-evolving craft spirits portfolio.

Known for their Charlatan American Pale Ale (2016 & 2018 Great American Beer Festival Bronze APA), Son of Juice Hazy IPA, and Fat Pug Oatmeal Milk Stout (2017 Great American Beer Festival Bronze Oatmeal Stout), the Brewery is excited to begin offering craft spirits alongside their beer at on and off premise accounts throughout The Chicagoland Area. “Until now, we’ve only been able to offer our craft spirits in 375ml formats to-go at the Lounge and select whiskey-forward bars and restaurants. It’s exciting to be able to offer our Spruce Gin to more places that have supported Maplewood throughout the years by carrying our beer,” said Ari Megalis, Head Distiller and Co-Owner.

The 750ml bottles will begin distribution the week of May 11th throughout The Chicagoland Area and will be available to order for No Contact Pick Up using Maplewood’s web-store on Tuesday, May 12th at the Lounge located in Logan Square. (maplewoodbrew.com/shop)

To accompany the release, the Brewery & Distillery will be rolling out two new “make it yourself” cocktail recipes encompassing two of their year round beer offerings, Charlatan and Son of Juice. “We really want to show the versatility of the Spruce Gin.  One of our main goals at the Lounge is to make our customers feel at home when they’re at Maplewood. These ‘’make it yourself’’ cocktails are a way of engaging with our customers and carrying out that goal while the Lounge is temporarily closed due to the COVID-19 pandemic,” said Eric Mott, Lounge General Manager.

Maplewood has been producing finely crafted beer and spirits out of their 10BBL brewhouse and 250L Kothe hybrid still since 2014. Three years after moving into the production facility, Maplewood opened the Lounge, a neighborhood bar doubling as a cocktail parlor and brewery taproom. Beginning commercial distribution throughout Illinois shortly after settling into the Logan Square space, Maplewood has since expanded their distribution footprint into Missouri, SW Michigan, Northern Indiana, Wisconsin and Kansas. Maplewood’s patrons have come to expect expertly crafted beer in a wide range of styles.