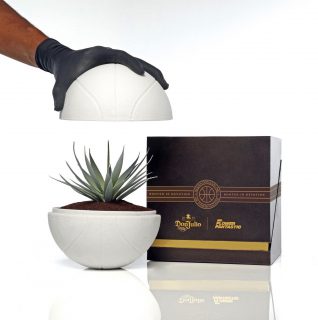 Mr. Flower Fantastic and Don Julio debut their commemorative planter, Rooted in Devotion, exclusively on NTWRK. Rooted in Devotion, which celebrates the diversity, culture and voice of professional basketball players and the black community, is available on the video shopping app for $375.

The cast marble planter (specially designed to grow succulents and flowering plants), comes in two spherical halves that, when put together, resemble a basketball. Each Rooted In Devotion planter will ship out in a custom designed protective shelter, inspired by the iconic Tequila Don Julio 1942 packaging. Included in each package is a synthetic placement plant, trilingual planting instructions in English, Spanish and Japanese and a certificate of authenticity hand signed by the artist.

Rooted in Devotion’s central theme, “A History Rooted in Devotion; A Future Grown in Excellence,” serves as an ode to three organizations founded in excellence—Mr. Flower Fantastic, Don Julio and major league basketball. However, the collaboration puts a specific focus on the light and inspiration that basketball players have provided America throughout some of its bleakest hours, including this year’s health and humanitarian crises.

Since its inception, professional basketball players have led the country in their commitment to athletic excellence. Now, during a challenging moment in our country’s recent memory, they continue to act as beacons for hope and change, striving to make a difference both on and off the court. Excellence does not happen by accident, nor can it be achieved overnight. It is the product of sustained devotion to hard work, the result of sacrifices made today in hopes of a better tomorrow. It may not always be easy—but greatness never is.

A portion of all proceeds will be donated to Mr. Flower Fantastic’s charity Seeds The City Needs (seedsthecityneeds.com), an agricultural impact initiative that works to build a culture of health in inner city communities. The goal of Seeds The City Needs is to adequately address the inequitable social, political, economic, environmental and racial determinants of health, as well as overall access to quality foods.

NTWRK’s unparalleled access to content hosted by the biggest names in pop culture has made the platform unlike anything else in the marketplace, merging together the partnership of the best brands and talents. Touted as the next wave of video commerce, NTWRK’s first phase has been a collection of shopping content from some of the most highly sought-after brands and personalities driving youth culture and will continue with even more creative content and experiential one-of-a-kind experiences.