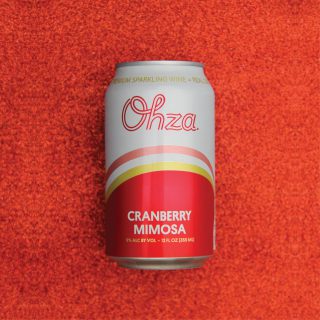 CAMBRIDGE, Mass. – Ohza, one of the fastest-growing ready-to-drink beverage companies, has introduced a new flavor, Cranberry Mimosa, to their canned cocktail line-up. Available direct-to-consumers online and in retailers starting mid-September.

“After months of requests and countless taste tests, we’re thrilled to introduce a refreshingly tart mimosa that uses real cranberry juice and our signature zero sugar bubbly”, says Ohza Founder Ryan Ayotte. The expansion follows Ohza’s success in New York, New England, as well as direct-to-consumer across the country. “With the rapid growth of the RTD category, we’ve noticed an overwhelming skew toward summer flavors. Despite Cranberry being a year-round offering for us, we see a huge opportunity for Ohza and Cranberry Mimosa specifically, to be the go-to RTD cocktail for the cooler months ahead”.

Redefining ready-to-drink beverages, Ohza’s gluten-free mimosas have the calorie count of a hard seltzer, but the bold flavor of a serious cocktail – all while containing no added sugar, nothing artificial, zero preservatives, and an extremely clean nutrition label. Crafted with premium sparkling wine and real orange juice, Ohza’s mimosas contain up to 80% less sugar than standard DIY mimosas.

Ohza was founded in June 2019 by Ryan Ayotte after attempting to mix mimosas with his friends on a tippy boat off of Cape Cod, MA. As a “champagne cocktail” company, Ohza uses quality sparkling wine and real juice like you would when making them yourself, but with fewer calories, less sugar, and ready-to-drink. Now available in three flavors, Ohza is considered one of the fastest-growing ready-to-drink cocktail companies in the industry. Ohza is available direct to consumers in 43 states at ohzamimosas.com, as well as at 1500+ retailers in the Northeast, including Whole Foods. Follow Ohza on Instagram and Twitter @ohzamimosas, and like on Facebook.