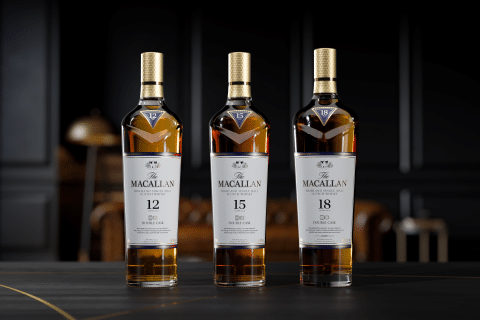 Double Cask is the marriage of two worlds. First introduced in 2016 with The Macallan Double Cask 12 Years Old, the enticing collection is formed from a harmonious union of American and European oak sherry seasoned casks. Together they combine to create a perfectly balanced single malt Scotch whisky with a distinctive warm character that is punctuated with a contemporary soft sweetness.

“Bringing together American and European oak sherry seasoned casks to achieve the perfect balance of flavors is incredibly exciting for the Whisky Mastery Team, and we are proud to offer two new expressions to this distinctive range for The Macallan Double Cask fans to explore”, said Kirsteen Campbell, Master Whisky Maker at The Macallan. “Oak influence is the single greatest contributor to the quality, natural color and distinctive aromas and flavors at the heart of The Macallan’s single malts.”

To commemorate this unique creation, McCurry travelled across continents to witness and document The Macallan’s incredible wood journey. The voyage begins in the vast green forests of northern Spain and the French Pyrenees, where The Macallan sources its European oak. New oak from the lush forests of Ohio, Missouri and Kentucky in America is also transported thousands of miles to Spain, where both types of oak are handcrafted into casks that are filled with sherry. McCurry’s exclusive photographic journal provides new insight into the mastery of wood through never-before-seen images of the people, places, skills and processes involved in the production of The Macallan’s exceptional oak casks.

Once seasoned, the casks are shipped to The Macallan Estate in Speyside where they are filled with new-make spirit. Following years of slumber, The Macallan Whisky Mastery Team uses their skill and expertise to select the best balance of spirit from both the American and European oak sherry seasoned casks to create Double Cask. The result is a perfect partnership, with the sherry seasoned American oak imparting delicate flavors of vanilla, while the European oak delivers the subtle and unmistakable spice and classic style of The Macallan.

“The thing I admire about The Macallan is their passion for craftsmanship, their excellence and their integrity for their processes. Sometimes you have to choose a different path – the one less taken – to go beyond hardship, to reach excellence,” said Steve McCurry.

Aroma: Dried fruits, toffee and vanilla with smooth oak and baked apple balanced with notes of honey and chocolate

Finish: Warm ginger turning to caramel and citrus with a creamy mouth feel

Aroma: Dried fruits, ginger and toffee with rich orange and hints of clove with nutmeg

Palate: Rich raisin and sultana with notes of caramel, vanilla and ginger balanced by wood spice and zesty citrus

Founded in 1824, The Macallan is one of the worlds’ most admired and awarded single malt whiskies. The reputation of The Macallan is based on a product of outstanding quality and distinctive character. An obsession with excellence has been the hallmark of The Macallan since its founding, by Alexander Reid, on a plateau above the river Spey in north-east Scotland.

In 2018, The Macallan unveiled its new £140 million distillery and visitor experience on its Speyside estate, increasing investment in whisky, warehousing and in The Macallan’s signature sherry-seasoned oak casks.  The striking contemporary architecture, cut into the slope of the land, takes its cues from ancient Scottish hills.  It stands nearby Easter Elchies House, the Highland Manor built in 1700 which has been The Macallan’s spiritual home since 1824.  The new distillery marks an important milestone, recognising the significant journey of The Macallan since 1824 and marking an exciting new chapter in the evolution of the luxury single malt.

Steve McCurry has been one of the most iconic voices in contemporary photography for more than 30 years, with scores of magazine and book covers, over a dozen books, and countless exhibitions around the world to his name.

Born in a suburb of Philadelphia, Pennsylvania; McCurry studied film at Pennsylvania State University, before going on to work for a local newspaper. After several years of freelance work, McCurry made his first of what would become many trips to India.

Travelling with little more than a bag of clothes and another of film, he made his way across the subcontinent, exploring the country with his camera. McCurry brought the world the first images of the conflict in Afghanistan, putting a human face to the issue on every masthead. His work spans conflicts, vanishing cultures, ancient traditions and contemporary culture alike – yet always retains the human element that made his celebrated image of the Afghan Girl so powerful.

He has been a member of Magnum Photos since 1986. McCurry has been recognised with some of the most prestigious awards in the industry, including the Robert Capa Gold Medal, National Press Photographers Award, and an unprecedented four first prize awards from the World Press Photo contest, to name but a few. Visit stevemccurry.com.