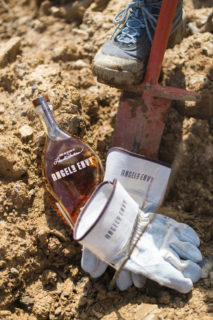 OUISVILLE, Ky. — ANGEL’S ENVY, the Louisville-based craft distiller that produces small batch, finished whiskeys, is furthering its commitment to a sustainable barrel supply chain through its eighth annual Toast the Trees initiative this September. ANGEL’S ENVY, in partnership with the Arbor Day Foundation, will plant a portion of the trees from this year’s initiative on a private farm straddling the Meramec River in Dent County, MO that supplies directly to its majority barrel provider, Independent Stave Company. Additionally, ANGEL’S ENVY will work with Green Forests Work in conjunction with the Arbor Day Foundation to plant a portion of this year’s trees on its own land in Henry County, KY for future use in bourbon barrels.

“As bourbon continues to gain popularity, it’s more important than ever for us and others in our industry to find ways to create sustainable production cycles that will help our industry thrive for generations to come,” said Wes Henderson, ANGEL’S ENVY Co-Founder and Chief Innovation Officer. “By closing the loop and planting trees that will someday make their way back to Independent Stave Company as barrels, it’s exciting to think that, through Toast the Trees this year, our fans could be playing a part in creating the barrels used to produce Angel’s Envy in the future.”

ANGEL’S ENVY’s 2021 Toast the Trees planting goal is 65,000 white oak trees – an increase of 15,000 from last year’s goal of 50,000. While a portion of the trees from this year’s campaign will be planted on private lands for future use in barrels, the remainder will be planted with Green Forests Work and the Arbor Day Foundation throughout eastern Kentucky and the surrounding Appalachian areas to support reforestation. As the Toast the Trees program continues to grow, ANGEL’S ENVY plans to increase the percentage of tree plantings that will specifically support a sustainable barrel production cycle.

“Partnerships like this are not only fun, but they also contribute a significant boost to our overall mission,” said Dan Lambe, president of the Arbor Day Foundation. “It is truly inspiring to work with a partner like Angel’s Envy, as they continue to answer the call for further responsible business practices. They are striving to go above and beyond in their own pursuit to become industry leaders for sustainability.”

To support this year’s Toast the Trees initiative and help ANGEL’S ENVY reach its goal, fans can: share a photo or video of their ANGEL’S ENVY drink or bottle with #ToastTheTrees on social media; refer a friend to 500 Main, ANGEL’S ENVY’s online membership platform; take a weekly quiz about white oak ecology on 500 Main; or purchase any cocktail at ANGEL’S ENVY’s downtown Louisville distillery. Additionally, to celebrate the progress made over the past eight years of the program, ANGEL’S ENVY is gifting a Treehouse Getaway to one member of 500 Main who helps plant trees via the platform this year. For more information about how to enter, how to support the program or ANGEL’S ENVY’s ongoing commitment to sustainability in the bourbon industry, please visit angelsenvy.com/#toast-the-trees.

ANGEL’S ENVY is a Louisville-based craft distiller that produces small batch, finished whiskeys. Co-founded in 2010 by the late Master Distiller Lincoln Henderson and his son Wes Henderson, it began as a passion project that combined their family’s deep-rooted passion for and knowledge of the industry with an innovative outlook on bourbon making and finishing. Today, Wes Henderson and his sons Kyle, Andrew, Connor and Spencer Henderson continue the family legacy, working together to produce ANGEL’S ENVY’s core offerings – Kentucky Straight Bourbon Finished in Port Wine Barrels and Rye Whiskey Finished in Caribbean Rum Casks – as well as a variety of innovative, special releases.

ANGEL’S ENVY opened the doors to its distillery in 2016 – it was the first full-production whiskey distillery in downtown Louisville and is located at 500 East Main Street. The company distributes to all 50 U.S. states and several select international markets as of February 2020. ANGEL’S ENVY is produced by Louisville Distilling Company, a subsidiary of Bacardi Limited. ENJOY RESPONSIBLY.  Angel’s Envy is a registered trademark. Bottled by Louisville Distilling Company, Louisville, KY. Kentucky Straight Bourbon Whiskey Finished in Port Wine Barrels – 43.3% Alc. By Vol.

About the Arbor Day Foundation

Founded in 1972, the Arbor Day Foundation has grown to become the largest nonprofit membership organization dedicated to planting trees, with more than one million members, supporters, and valued partners. During the last 49 years, more than 400 million Arbor Day Foundation trees have been planted in neighborhoods, communities, cities, and forests throughout the world. Our vision is to help others understand and use trees as a solution to many of the global issues we face today, including air quality, water quality, climate change, deforestation, poverty, and hunger.

As one of the world’s largest operating conservation foundations, the Arbor Day Foundation, through its members, partners, and programs, educates and engages stakeholders and communities across the globe to involve themselves in its mission of planting, nurturing, and celebrating trees.