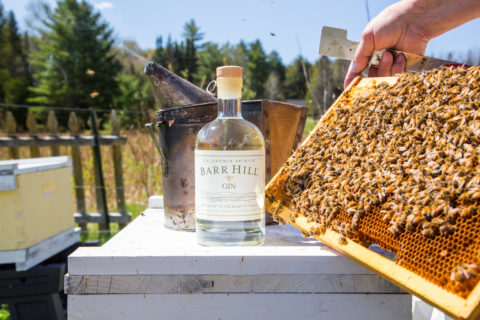 MONTPELIER, Vt. — Barr Hill Gin, the #1 best-selling American super-premium gin in the U.S., announced the 5th annual Bee’s Knees Week that will extend from September 24 through October 3, 2021. The charitable initiative celebrates the Bee’s Knees cocktail and underwrites habitat creation for endangered pollinators. Barr Hill Gin nurtures a community of bars, restaurants and spirits shops that work together to save the bees, the “angels of agriculture,” who are responsible for one in three bites of food consumed. It is the largest initiative in the spirits industry that specifically protects bees.

This year, the goals of Bee’s Knees Week are to plant 500,000 square feet (11.5 acres) of bee habitat across the U.S. and enlist 2,000 participating bars, restaurants and stores to promote the initiative. Barr Hill Gin is inviting lovers of pollinators and the Bee’s Knees cocktail to simply post a photo of the honeyed Prohibition-era drink to social media using the hashtag #beeskneesweek and tagging @barrhillgin. For every photo posted, Barr Hill Gin partners with one of several non-profit organizations located throughout the U.S. to plant 10 square feet of pollinator habitat at the company’s expense.

“Bees have always been at the heart of Barr Hill Gin and we are committed to saving them and nurturing them by protecting their habitat,” says Ryan Christiansen, President and Head Distiller, Caledonia Spirits, which produces Barr Hill Gin in Vermont. “Our founder was a beekeeper and we use raw honey to make our spirits, so we rely on bees quite literally. Similarly, bartenders need citrus, herbs, and other ingredients that depend on pollination and they have emerged as some of our most impassioned allies. That being said, bees are endangered due to habitat loss and other factors, and Bee’s Knees Week is our way of directly helping the bees, which our founder, Todd Hardie, calls the ‘Angels of agriculture.’”

Bee’s Knee Week is powered by the Bee’s Knees cocktail, a drink created by Austrian-born Frank Meier, who moved from New York to Paris at the start of Prohibition to work at The Ritz Bar. Meier’s simple mix of gin, lemon juice and honey is included in Georges-Gabriel Thenon’s “Cocktails de Paris” (1929) and his own “The Artistry of Mixing Drinks” (1936).

Since Barr Hill Gin is made with raw honey, it is extraordinarily balanced, with significant botanical depth, making it the ideal spirit to pair with the raw honey and lemon in a Bee’s Knees. Sam Nelis, Head Bartender & Beverage Director, Caledonia Spirits, tweaked the proportions of the cocktail to best showcase the beauty of Barr Hill Gin. It has emerged as the most popular cocktail at the distillery’s bar, with the recipe below:

Combine ingredients in a mixing tin. Add ice, shake, then double strain into a chilled cocktail glass. Garnish with a lemon twist.

Bees are responsible for one in three bites of food. They pollinate 80% of the world’s plants and more than 90 different kinds of food crops. These include apples, melons, cranberries, pumpkins, squash, broccoli and almonds. In the U.S. alone, this accounts for more than $20 billion worth of agricultural products annually. According to the USDA, one colony of bees is worth 100 times more to the community than to the beekeeper.

Yet one in four bee species is at risk of extinction due to habitat loss and fragmentation, pesticides, climate change and mites. Alarmingly, the U.S. has lost more than 50% of its bee colonies, from 6 million in 1947 down to 2.8 million in 2019.

What Is Bee Habitat?

Barr Hill Gin funds the planting of bee habitat to safeguard the future of the bees. This means deliberately cultivating and protecting flowering native plant species that provide natural nesting sites for bees. The designated land will not be mowed or developed, nor will the use of pesticides be allowed. For each planting, milkweed, thistle, geranium, wild bergamot, ninebark, mint, rose, goldenrod, aster, spider lily, blueberry, verbena and zizia are considered. Bee the Change, one of the non-profits that plants bee habitat on Barr Hill Gin’s behalf, creates habitat across New England, including on solar farms and at the North Branch Nature Center in Montpelier, Vermont. Next year, an additional bee habitat will also be planted at the Barr Hill Gin Distillery in Montpelier, Vermont.

Habitat loss is a significant driver of the bee crisis. Every time a new property is developed or a lawn is mowed, native and naturalized species that could be habitat for wildlife and pollinators disappear. Barr Hill Gin suggests that bars, restaurants and stores think in terms of habitat offsets. For example, a venue that occupies 3,000 square feet is encouraged to set a goal of 300 posts, which will thereby offset the lost habitat their footprint represents.

No Cost for Bars, Restaurants and Retailers to Participate

Participating bars, restaurants and stores receive a host of educational support materials at no cost. For bars and restaurants, they include posters, table tents, menu cards, pins and coasters, while retailers receive POS display headers, sell sheets, notecards and bottle neckers. A select number will be gifted a 6-foot beekeeper standee for guests to insert their faces and have photos taken.