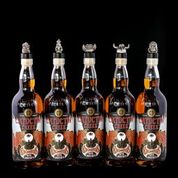 URCELLVILLE, Va.— Catoctin Creek Distilling Co., The Virginia Rye Whisky ?, WAS excited to partner with GWAR to release their infamous Ragnarök Rye this past February… but then the monster metal rock band drank it… all of it.

“We knew working with GWAR on this whisky would be troublesome, but we didn’t realize it would be this troublesome,” said Catoctin Creek founder and general manager, Scott Harris. “Usually, we have the production process under control, but this time the band members drank everything we distilled, and then demanded we create bottle toppers using rare metal ore sourced from the fillings of trolls,” continues Harris. “I knew our original schedule was shot. I mean, it’s really cool to have rare metal in our bottle design, but it was hard rounding up all those trolls.”

Aged in charred new white oak, then sugar maple and cherrywood, each bottle of Catoctin Creek’s 92-proof intergalactic rye whisky comes with a cast-metal collectable bottle topper featuring each of the five members of GWAR: Blóthar the Berserker; Balsac the Jaws of Death; Jizmak da Gusha; Beefcake the Mighty; and Pustulus Maximus.

Thrilled with the release, lead singer Blóthar the Berserker offered his enthusiastic endorsement, “If whisky is liquid sunshine, this rye is a scorching alien sun.”

Recently GWAR linked up with whiskey and spirits connoisseur Fred Minnick for an exclusive virtual tasting and review of the Ragnarök Rye. From the review, Minnick states, “Well done. This is a great edition to the rye whiskey scene. I think that this is one of the best tastes I’ve had from Catoctin Creek… it is very good.”

Up to 200 cases of Ragnarök Rye (92 proof/46% ABV) $99/750mL will be available throughout Catoctin Creek’s national distribution footprint beginning Friday, May 28, with more on the way soon. It will also be on sale in the distillery’s online store for curbside pickup or direct shipping in Virginia only. Pre-sale orders can be purchased through Seelbachs.com. Catoctin Creek Rye Society members may contact the distillery to obtain a bottle any time before the release date.

Catoctin Creek Distilling Company, The Virginia Rye Whisky ?, was founded by Scott and Becky Harris in 2009. Inspired by the history and craft of Virginia, Catoctin Creek made a name for itself as the first legal distillery since Prohibition in Purcellville, Virginia’s Loudoun County. The craft distillery is home to Virginia’s most-awarded whisky, Roundstone Rye, which has been presented gold medals across the globe and stands out through its old-world production methods. Catoctin Creek prides itself on sourcing rye whisky, gin, and seasonal brandy from local grains and fruits, with spirits available in 29 states and 3 continents. The Harris’ intricate attention to detail results in high quality internationally acclaimed products, including seasonal releases and private cask offerings, that recognize the true craft of Virginia spirits.

The story of GWAR is carved across the history of this barren and hopeless planet, but GWAR themselves are not of this world. Their story begins in the deepest reaches of outer space. Long ago, the beings who would become the rock band GWAR were part of an elite fighting force, the Scumdogs of the Universe. For eons, they served as thralls to a supreme being known only as the Master. But one by one, each future member of the band earned a glaring reputation for being an intergalactic screw-up. And so, they were banished, sent away on a fool’s errand to conquer planet Earth. Once here, GWAR shaped the face of the globe, destroying and rebuilding the natural world, and giving rise to all human history.