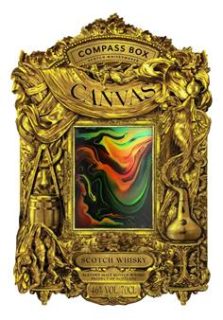 LONDON – Compass Box Scotch Whiskymakers announce a new limited edition, Canvas Blended Malt Scotch Whisky (SRP $150, ABV: 46%), featuring a parcel of whisky aged in Vino Naranja casks. Drawing on Compass Box’s passion to inspire curiosity in their whisky and in their label designs, Canvas is meant to artistically inspire consumers by engaging them through the opportunity to create their own Canvas label design.

A portion of Canvas was aged for three years in Vino Naranja casks, which resulted in intense citrus oil and honeyed oak notes. Vino Naranja is a fortified Spanish wine from the Condado de Huelva (in southern Spain) to which orange peel is added to the cask for a portion of the wine’s ageing process. Canvas is a bold malt whisky, yet it is still an approachable match for new Scotch fans. The blend carries notes of ripe fruit, honey, vanilla, cocoa powder, oak, and a marmalade stickiness.

“For us, whisky making is an artistic process, and the whisky is our canvas,” says whiskymaker James Saxon. “Canvas achieves a delicious level of boldness thanks to part-ageing in theVino Naranja casks, filled as an experiment in 2018. We wanted this release to embody the spirit of its creation and inspire sippers to indulge in their own artistic adventures.”

Award-winning designers Stranger & Stranger drew inspiration from the Renaissance-era use of trophy frames when they partnered with Compass Box to craft Canvas’ consumer-engaging label. Historically trophy frames, such as the one portrayed, were a way to showcase ones greatest achievements. On the Canvas label, the frame captures the story and achievement of whiskymaking. Consumers have the unique opportunity to partake in the label creation process by using the bottle’s QR code, which will link to a template where they can put their own photo, sketch, poem or other work of art within the frame and then print the personalized label. Compass Box invites creatives and whisky fans to share their unique designs on social media, tagging the brand and using #compassboxcanvas. The hope is for whisky to inspire art that inspires another whisky.

Canvas Blended Malt Scotch Whisky will be available in the U.S. beginning September 1, from ReserveBar, Flaviar, and other e-commerce retailers. 5,880 bottles will be released worldwide.

Compass Box are Scotch whiskymakers. The word ‘whiskymaker’ is their word – it does not appear in a dictionary. For 20 years they have been relentlessly focused on reinventing Scotch whisky, with every new blend designed to help make the world of whisky a more interesting place. They have not done it on their own and have collaborated with some of the world’s most visionary bartenders and designers to really push the boundaries of what is possible. Compass Box have won more awards for innovation than any other producer in Scotland because they are always experimenting. Always looking for sparks of creativity that will deliver something totally compelling, yet completely surprising. Whiskies that just must be experienced. This vision motivates them as whiskymakers. Their blends are consistently rated equal to or better than the great single malts of Scotland by the most respected voices in the industry.

American ex-pat John Glaser is the founder and head whiskymaker of Compass Box and six-timeWhisky Magazine Innovator of the Year and 2020 Whisky Magazine Hall of Fame Inductee.  He began his career on a path to become a winemaker, before re-routing himself through the corporate world and ending up as a Marketing Director for Johnnie Walker in London. With a desire to do things differently, John started Compass Box from the kitchen of his west London home in 2000 in order to bring the joys of Scotch whisky to more people. From the beginning, his vision has been to create one of Scotland’s finest and most compelling whisky companies, re-imagining the standards for quality and style in the industry. In 2020, John was inducted into theWhisky Magazine’s Hall of Fame. Two decades later, Compass Box now has two blending rooms in London, a team of 20 working internationally and stocks of maturing whiskies in Scotland. In 2020, Compass Box celebrated its 20th anniversary. With a forward-looking approach and unrelenting focus on creativity and integrity, John and his team continue to take forward his mission to make the world of Scotch whisky a more interesting place.