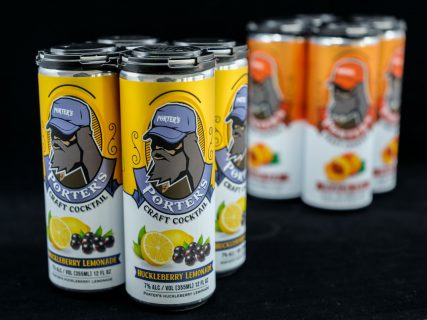 OGDEN, Utah – Ogden’s Own, an award-winning leading distiller of craft spirits and the largest independently owned distillery in the state of Utah, has officially doubled the size of its recently-released canned cocktail line, with the debut of two new varietals – Porter’s Huckleberry Lemonade and Porter’s Peach Tea.

Both new canned cocktails are made with the distillery’s fan-favorite Porter’s Whiskey liqueur and blended with fresh-brewed, all-natural lemonade and iced tea for a refreshing, balanced sipping experience just in time for the warmer spring and summer months. These new expressions will join Ogden’s Own’s recently launched Five Wives Vodka canned cocktails in the lineup and are now officially available for sale at the Ogden’s Own Distillery Store at 615 W. Stockman Way.

Expanded distribution to Ogden’s Own customers nationwide via the brand’s retail and online partners is expected in the coming weeks. Ogden’s Own’s canned cocktails continue to push the boundaries of the burgeoning canned beverage market through introducing unique flavor innovations and combinations that are both charmingly familiar yet creative. Since its inception in 2009, Ogden’s Own has carved out a unique path by delivering unique, unexpected offerings to the market while also remaining nimble enough to respond directly to shifting consumer demands and trends. Porter’s Whiskeys have long been the gold standard to illustrate Ogden’s Own’s willingness to take risks through experimentation with bold, unconventional flavor profiles, with examples such as Porter’s Fire Cinnamon Whiskey, last year’s award-winning Porter’s Peanut Butter Whiskey, and the naturally flavored, sweet-but-not-sugary Porter’s Huckleberry and Peach. In a further nod to experimentation, the packaging of the new canned cocktails even feature a rejuvenated version of the namesake mascot of the Porter’s whiskey line, Orrin Porter Rockwell, who has been transformed from a fearsome enforcer of the Old West to a bearded, hat-donning hipster.

A blend of Porter’s Huckleberry whiskey liqueur and lightly carbonated lemonade, expertly crafted to deliver a refreshing and flavorful sipping experience. The expression is carried by flavors of Northwest huckleberries which blend harmoniously with naturally brewed lemonade, delivering fruit-forward flavor that perfectly balances tartness and sweetness. 7% ABV for a 355ml can.

A blend of Porter’s Peach whiskey liqueur and unsweetened tea that offers a twist on a familiar, fan-favorite summertime sipper. The unsweetened tea reaches a perfect sweetness when blended with the ripe peach flavor of Porter’s, making for a warm weather treat that is balanced to perfection. 7% ABV for a 355ml can.

“When we first launched our canned cocktails line earlier this year with Five Wives Moscow Mule and Five Wives Vodka Soda, we knew they’d be a hit and always intended to expand the portfolio. We’re thrilled to be doing that now with the release of Porter’s Huckleberry Lemonade and Porter’s Peach Tea,” said Steve Conlin, CEO and co-founder of Ogden’s Own Distillery. “Porter’s Whiskeys have long been the vessel with which we can express our creativity when it comes to outside the box flavor experimentation. We know our fans better than anyone, and we’re certain that they’ll love these new additions to the family as the perfect complement to their upcoming outdoor sipping occasions and summertime enjoyment.”

The launch of Ogden’s Own’s canned cocktail line comes following a year of significant momentum for the distillery. In 2020, Ogden’s Own opened the doors on its brand-new, 32,000 square-foot multi-purpose facility in the Ogden Business Exchange, an area quickly transforming into an incubator for leading regional businesses. The first product released at the new Ogden’s Own distillery was Porter’s Peanut Butter Whiskey, which was met with widespread acclaim. Additionally, the brand played a leading role in the pandemic by donating direct funds to member of the local food & beverage community in Ogden and shifting operations to product thousands of gallons of hand sanitizer, which went to front-line workers, local businesses and schools, and high-risk communities such as the Navajo Nation. Ogden’s Own’s Porter’s canned cocktails are now officially available for purchase at the Ogden’s Own Distillery Store, 615 W. Stockman Way, Ogden, Utah 84401, for the price of $3.39 per 12 oz. can.

Ogden’s Own is based in Ogden, Utah and gained notoriety for its unique expressions and its often-satirical playfulness on stereotypes in its home state. Founded in 2009, Ogden’s Own’s first product was Underground Herbal Spirit, which was met with immediate acclaim, winning a Double Gold Medal from the prestigious San Francisco World Spirits Competition in 2012. The distillery then released Five Wives Vodka, which the brand is perhaps best known for today due to the national notoriety it received upon hitting the market. The name “Five Wives” was such a topic of controversy within the conservative-leaning Utah and surrounding states that Idaho refused to sell the product, prompting a national lawsuit where Ogden’s Own ultimately prevailed. Today, Ogden’s Own remains devoted to championing freedom of expression and offering its handcrafted, gluten-free products at an accessible, affordable price point. Their wide portfolio of expressions ensures that any customer can find a product that is suitable to his/her palate.