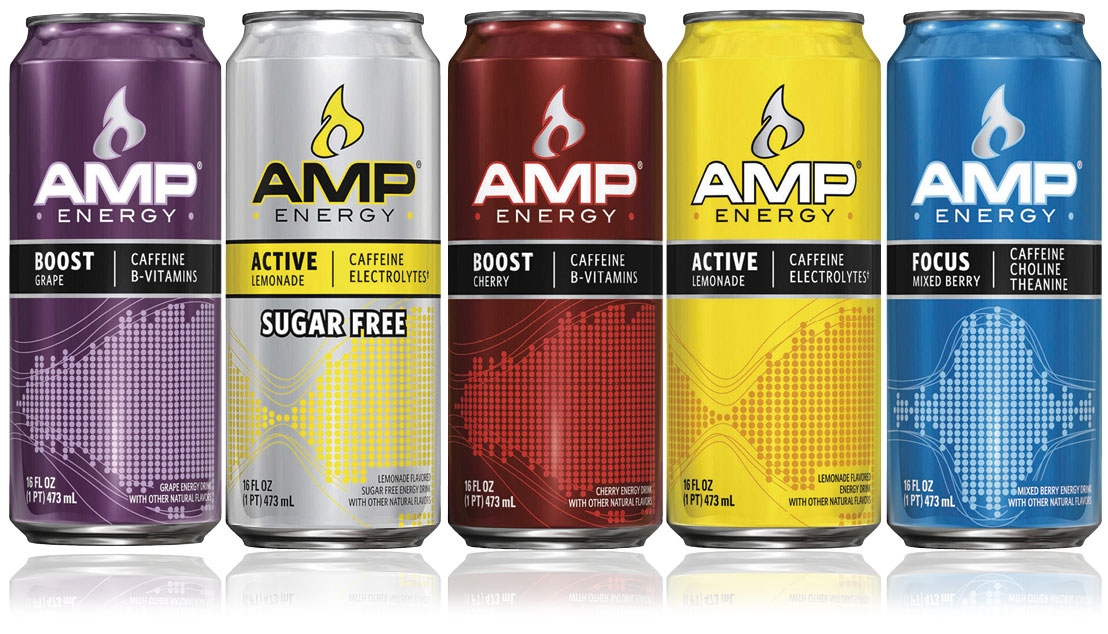 Three years ago, in an effort to revive the flagging Full Throttle franchise, Coke stripped things down. The company removed much of the taurine, guarana, b-vitamins, and other ‘mystery ingredients’ common to energy drinks from the product, streamlined the can, and went with a formulation that incorporated sugar, caffeine, and very little else in the way of energy boosters.  Pepsi, meanwhile, went the other way, moving its own native brand, AMP, into a multi-sku line and eventually remixing the product to meet a variety of energy-related need states, like “Focus,” (with l-theanine and choline) “Active,” (with electrolytes) and Boost (with pretty typical stuff).

While the most outstanding energy drink brands remain, by and large, independent, the relative sales performance of big-company entrants AMP and Full Throttle since that time reflect the prevailing wisdom in energy drinks, that more is more. AMP, with its broader focus, has performed better, while Full Throttle is on the verge of slipping out of the top 10.

The divergent results – and the current crop of line extensions and highly-focused category entrants – show that in a category with several large players, much of the growth is coming out of niches. The large scale “hit-em-where-they-ain’t” innovations – like adding more caffeine or growing the size of the drink itself (note the success of Monster and Rockstar, both of which initially grew the category by going to 16 oz. cans) have been important for the success of energy brands, but as the category has matured, the growth is coming from innovative remixes featuring a growing array of esoteric ingredients and functional blends.

A look at the brands that have ascended against the Coke and Pepsi entries demonstrates the rule: Monster has grown not just vertically, but has broadened its line horizontally as well, adding an electrolyte-infused Rehab and a coffee-laden Java Monster variety to its core offerings. It is also on the verge of mixing in protein as yet another functional ingredient. Monster competitor Rockstar, which pioneered the energy/recovery category, also continues to break new ground by adding coconut water (Rockstar Coconut Water) and branched-chain amino acids (Rockstar XDURANCE) to other varieties.  In a slightly counter-intuitive move, Rockstar has also added a relaxation sub-brand, Rockstar Relax.

The other entrants into the category, new and old, are trying to keep the pace.

“A lot of my customers are trying to differentiate their energy brands by adding a function, or a claim for a function, so that consumer sees a little more value beyond a standard energy drink,” said Walter Orcutt, the EVP at NVE Pharmaceuticals, a contract energy drink and energy shot manufacturer.  “I think it’s happening even more rapidly now than it has in the past.”

Take a look at the variety of new ingredients and functions and the energy drink category begins to look like an amped-up mirror image of the entire beverage industry. Sure, there are varieties in cola, coffee, tea, juice, water, and even – for a while, anyway – beer, but there are also on-trend launches and line extension that incorporate, in addition to protein or coconut water, Aloe Vera, acai, GABA, polyphenols, tea catechins and many others, including fat-burning and “sensation”-oriented effects.

The cause of this varietal explosion? Competition, say most beverage executives.

But the energy drink format is one that allows easy adaptation, as well, Orcutt said, both because the margins on the products are so good they are able to absorb different additions, and because from a functional perspective the base of sugar and caffeine is easily felt from the start.

“You’ve got some room to play around,” Orcutt said. “By the same token, where the energy drinks and energy shots are pretty simple, when you drink an energy drink or shot, you feel it. About 20 minutes later, you get the effect. If you’re going to do, say, a hangover product or a libido product, the basic energy component makes for a trustworthy package.”

The best example of that most trustworthy package is Red Bull, of course, and its success is the exception – as well as the competitive juggernaut — that proves the rule. Red Bull’s first to market status codified the notion of what energy drinks should do: since then, it has been able to limit the need for innovation in its own brand to just a few changes in packaging size and reduced sugar versions. Red Bull’s competitors, however, are always on the lookout for another edge.

“The existing players have done a great job in dominating the available retail space with pure energy plays,” said Bill Meissner, the CEO of Jones Soda, which recently reformulated WhoopAss to add elements related to muscle recovery. “The customer (retailer) will not add products that simply duplicate the offering of the Red Bull and Monster simply because they have different brand treatments.”

So where do the ideas for incremental innovations come from? Certainly, consumers’ embrace of new ingredients in other beverages or consumer goods can spur the innovation in a brand, according to Orcutt. But in other cases, the brand’s particular orientation can dictate the new ingredient set, such as with a “focus” oriented product like AMP. One hot area has been the addition of electrolytes and other recovery-oriented ingredients to products that overlap physical fitness or bouncing back from a hangover. Others have been more esoteric – and less effective from a sales perspective or from a functional perspective, as well.

“Consumers aren’t going to scrutinize the variable ingredients – when you get into the exotic extensions, the ingredients are a little more interesting and they have more exotic names,” Orcutt said. “There’s a lot of botanicals that go in, but does it work any better? Is the function there? The consumer has to decide that.”

That might be why a balanced approach is best. At Monster, according to VP of Marketing Geoff Bremmer, the ideas drive the innovation some of the time, as with the addition of protein to an already growing recover category. But  in other cases, Bremmer said, a particular innovation dictates the development of a new product, as with the company’s using Ball’s cap free re-sealable can for its Import line.

Regardless, the pace of innovation is likely to continue for as long as the low barriers to entry remain, and marketers continue to think about need states that might go well with a bit of extra caffeine.

The notion of combining energy with other things is powerful,” Lennon said.