IRI gives us an interesting snapshot of the overall state of beer retailing this month, showing how craft and imports have re-ordered the established brand hierarchy in the U.S. While AB and MillerCoors are entrenched, the remaining 25 percent is largely divided between two large craft brewers and a pile of independent brands – many of which passed the $100 million mark in sales in the past decade. Yuengling’s growth seems to have tempered a bit, but Boston Beer, Sierra Nevada and New Belgium continue to surge, and the percent change in sales really shows where the heat is for beer. As for the growth a Vermont Hard Cider – which shows the popularity of cider as a class, that’s also rolled into SAM and, to a lesser extent, MillerCoors sales as well. 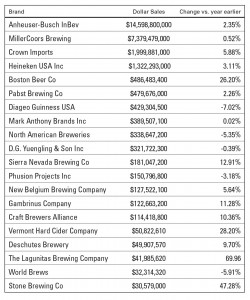 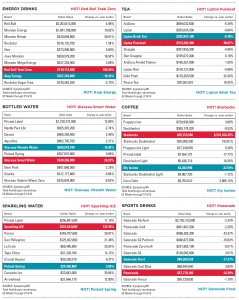