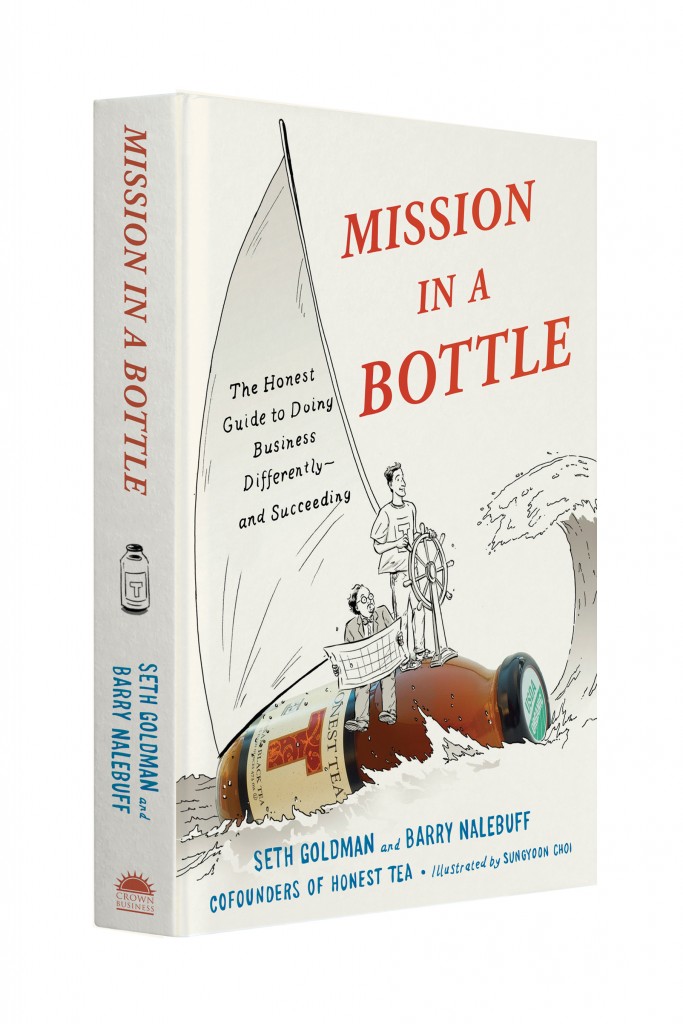 We’re pleased this month to be able to include an excerpt from Mission in a Bottle, a new book by the co-founders of Honest Tea. We’ve got a ton of other stories, of course, but it’s rare that we’re presented with an opportunity to showcase a piece that dovetails so nicely with our own place in the industry, which is as a resource for the galaxy of the entrepreneurial beverage company.

Having had the chance to read an advance copy of the book, I can tell you that it offers a spin on the beverage business that is invaluable to the entrepreneur – largely because it’s told from the point of view of a pair who were, initially, outsiders. It’s an established pattern that many of the most effective entrepreneurs do not come from inside their industry, and that is certainly true in the case of Seth Goldman and Barry Nalebuff.

Much of the value of the stories that Seth and Barry tell come from their ability to recall, as adventurers in this new world of beverage, their encounters with many of that world’s established practices. Some made sense at the time, and, as many examples indicate, some seemed to be just plain ridiculous. Here’s one: Honest’s sales guru, Dan Cavanaugh, takes the pair out to lunch with route drivers from a distributor, where they learn that incentivizing the sales reps – a common practice – doesn’t make sense because some routes are more profitable, and the reps are just sharing the bonuses around. Here’s another: a retailer isn’t putting Honest Tea out on the shelf because it sells too fast – he doesn’t want it to look out of stock. By not being entrenched in those patterns, the pair are able to disrupt the business, often to their advantage.

The creativity that Seth and Barry have shown over the long term in working around less-than-ideal practices is what has made Honest Tea such an important company, not just for beverages but for the broader entrepreneurial world as well. So are the mistakes that are retold here: the purchase of a bottling plant, their pursuit of a bagged tea business, bad hires and ill-fated negotiations.

There are those who have heard Seth speak – or who have met him – who will recognize many of the stories that are told in the book. But the addition of Barry’s insights helps to keep them from becoming hackneyed – and the stories, even for those who know them, bear repeating.

That other beverage companies would later successfully execute the plays that Honest Tea drew in the dirt is signal enough that there’s teachable material in this company’s evolution. True, Honest Tea isn’t the only company that has had to improvise on distribution – maybe not using a charcoal distributor, for example, but one that supplied cold cuts – but it’s awfully nice to see a full record of the many small decisions that have to be made when growing a brand all collected in one place.

Having them together lets us understand the record of innovation and mission that has come from the founders of Honest Tea. (Of course, having them told in tiny chapters in an easy-to-read graphic novel is even better, because it’s an innovative format that caters to those who, like me, have absolutely zero understanding of the courses that Seth took from Barry at Yale, where the pair first met.)

Fawning over such a useful tool is easy, and it’s understandable that Seth and Barry have chosen to subtitle it a “Guide to Doing Business Differently – and Succeeding.” That’s a fair assessment, as the pair offer up a lot of advice and break with the comic narrative format repeatedly to give takeaways that are much more in the “how-to” vein. But that subtitle sells short the context – that there’s a fair amount of specialized circumstance in the growth of every business, and there are parts of the Honest Tea story that belong to Honest Tea alone. While those circumstances mean that every solution tried by Seth and Barry won’t apply to every other business that seeks to apply them, they are also the stuff of a story worth telling. We’re glad to be able to help them do so here, for the benefit of our readers, and, we’re also glad to have had such a nice seat for much of the ride.