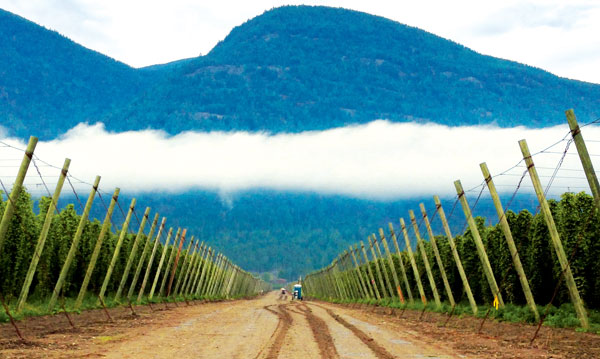 Rubbing the guts of a Cascade hop off his nose, Andy Goeler is in awe of the 1,500 acres of hops under trellis that surround him, resting at the foot of northern Idaho’s Selkirk Mountain Range. He’s gushing poetic adjectives, verbally painting a picture that needs no help painting itself.

After a career spanning three decades at Anheuser-Busch, Goeler is now two years into his tenure as CEO of Goose Island Beer, the Chicago-based brewery his former employer acquired for $38.8 million in 2011. But right now, he’s just breathing in this bucolic, somewhat hidden, and until recently, under-utilized stretch of earth.

But Elk Mountain Farm is more than just a postcard of a sweeping green hop farm, a bit muddy from the morning rain. This is a place of business, as evidenced hours later during a bumpy ride in a golf cart with Goeler and brewmaster Brett Porter on the way to the kiln.

“So you’re not crazy about the Kolsch?” asks Goeler.

“I’m not crazy about the Kolsch,” Porter responds, not turning around from the driver’s seat. “But I want to do what’s going to sell.”

Despite the roaming cell reception, this place 10 miles south of the Canadian border is becoming increasingly important to Goeler, Porter, and the rest of the Goose Island team. Few breweries of Goose Island’s size have access to their very own hop farm – A-B bought Elk Mountain in 1987 – and Goose is taking full advantage of the resource, relying on its hop supply more and more every year as it grows as a company. And while Goose wouldn’t be impervious to the hops shortage reportedly on the horizon, having Elk Mountain in its backyard certainly helps. Still, expansive as the land is, there are only so many acres to be harvested here.

Just how much of the hops used by Goose Island come from Elk Mountain is hard to pin down exactly (“Every year more,” says Porter, offering up the closest thing to an actual figure), but a little more than half of the farm’s output is allocated to Goose, the rest to A-B brands.

Call it a perk of teaming up with the world’s biggest beer company. 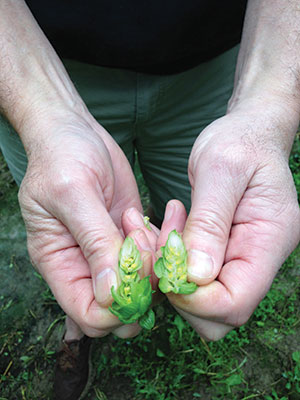 Consider the case of the Amarillo hop, which was tough to find a few years ago, according to Goose Island’s lead brewer, Keith Gabbett. Had it still been independently owned and operated at that time, retroactively stripped of its keys to Elk Mountain, Goose would have had to contract the hop from any number of farms, which would have dramatically influenced the production scale of various beers in its portfolio that prominently feature it.

“Elk Mountain Farms was able to grow about 700 acres or so of Amarillo, and that allowed us to produce beers like 312 Pale, which has Amarillo, Endless, which is an all Amarillo IPA,” he says. “Without that, without having Elk Mountain Farm and that acreage there or our relationship with [A-B], there’s no way we would’ve been able to do that on such a large scale.”

But it’s a hole card that A-B and other large breweries have played for years; even before the company moved to sell more craft beer, it played the futures game, locking in hops and barley years in advance. When you’re large enough as a craft brewer, you consider demand planning as well, which worked out well for the rest of the industry in 2012, when Boston Beer famously sold off extra hops to other craft brewers. It’s just plain good economics, according to A-B brass.

“We have long term contracts so we’re not subject to the short term swings in the market,” said Pete Kraemer, head brewmaster and vice president of A-B. “We have a stable supply. We know who’s going to grow our hops, we know how much we’re going to pay for them.”

The companies source hops from a variety of other suppliers as well, including an A-B farm based in Huell, Germany, keeping the reserve steady for both Goose and its mammoth parent.

“Do smaller brewers have the same luxury?” asks Jane Killebrew, A-B’s director of brewing, quality and innovation. “Not the ones I’ve seen.”

In fact, Porter insists the amount of hops the company buys from other farms has not decreased whatsoever due to the company’s increased production. And that’s where Goose is faced with the same predicament confronting other brewers amid growing talk of a hops shortage, according to Gabbett.

“As far as the specialty hops out there, Simcoe, Citra, Nelson Sauvin, all those wacky little hops everyone’s clamoring for, we’re in the same boat as everyone else,” he says. “The same droughts hit us all, really.”

Even if Elk Mountain maxed out, Porter still sees a need to grow the industry. By his calculations, 17,000 additional acres of hop growing land will be necessary within the next five years for the craft beer industry at large to sustain the rate of growth it is now displaying.

Here, there’s limited room to grow. With 1,500 acres planted as of harvest time, Elk Mountain has just a couple hundred to go before reaching maximum capacity. Kraemer says they’ve got their eye on a piece of land to potentially expand with, but doesn’t plan to add any acreage before filling up what they’ve got.

From an innovation standpoint, access to the farm – and its willingness to take requests from Goose regarding what to put in the ground – has enabled the company to scale up its innovation projects as well.

“We have access to some of their experimental hops and they have so much unplanned acreage that if we like something, they can put something in the ground for us,” says Gabbett. “So if we find something that we like and have an idea of what we want to do with it, we can plan for that, instead of sort of reacting to what’s out there on the market already.”

That’s the artisanal right brain of Goose at work. Kraemer explains the analytical left of A-B:

“There’s a professor that, I can’t remember his name, but he had a quote and he said, ‘The future’s already here, it’s just not evenly distributed.’ And his point was that, you know, all big innovations and things that became big weren’t invented over night. They already existed somewhere. They just weren’t available to the mass market and as they became available, they became more and more popular. The good innovator is the one that recognizes a trend somewhere that can be scaled up and can be bigger.”

A few hours later, Mark Burford, co-owner of New York’s Blue Point Brewing, which A-B acquired earlier this year in a deal reportedly valued near $24 million, will make his first appearance of the three-day trip. He’s here now to check out the farm.