Two undeniable realities from the show floor at Natural Products Expo East 2014: one, traffic was noticeably slower as compared to in recent years, and two, companies continue to embrace cold-processing as a way to attract new consumers, both in substance and style.

Though most exhibitors described attendance and energy at the show as being somewhat lethargic, Expo East nonetheless showcased the ongoing evolution of cold-pressed juices and cold-brewed coffee, each of which are emerging as standard-bearers for the natural channel. And with placement in conventional retailers quickly materializing, the dash to formulate (or, in some cases, reformulate) new cold-processed products appears to have supplanted interest for ingredients once thought to be trailblazing for beverages, such as aloe and acai.

Sizing Up, Down and All Around

For cold-pressed juice companies, it’s clear that package variety is the name of the game in hopes of reaching a broad market of consumers. While 16 oz. PET bottles are ubiquitous in the category, upstart brands like Daily Greens, Lumi and Vital Juice have introduced a range of bottle shapes and sizes designed to make it in mainstream channels.

Daily Greens founder Shauna Martin said that her company’s new 12 oz. size was created for conventional retail and, while it is still packed with 4 ½ lbs. of produce per bottle, the drinks will be come with a more wallet-friendly price of $5.49-$5.99. Launching on Jan. 1, Martin was not yet able to name retailer partners for the new products, however, she noted that “the plan is not to be in the same stores” as its flagship line.

“I don’t think we would ever size down our marquee flavors at Whole Foods,” Martin said. “That’s the right place for a 16 oz. bottle. We’ve been gathering feedback that [for] folks that shop at conventional, 16 oz. is a bit much for them, especially as dense as our green juices are. Eight to twelve ounces is more of the right size for somebody that’s starting into green juice.”

Lumi founder Hillary Lewis concurs. Her company is currently testing a new 10 oz. bottle size, which, priced at $3.99-$4.25, is distributed in Charlottesville and Richmond, Va. By comparison, Lumi’s 16 oz. juices retail for $8.99.

Yet while going smaller for some consumers, Daily Greens is planning to go big for others. The company is also prepping for the introduction of a 32 oz. bottle, which Martin said would also launch at the beginning of the year with Target or “a big box store” as a likely retailer. If the new product does indeed land at Target, it will be sharing space with Suja. The top-selling cold-pressed juice brand entered 1,200 Target stores with its Essentials and a subset of its classic line in September.

Meanwhile, Vital Juice is set to launch perhaps the smallest package for a cold-pressed juice on the market, albeit one designed for children. The company is transitioning to a 6 oz. bottle for its Vital Kids products, which launched in July and debuted in 10 oz. bottles. The drinks will be priced at $2.99 and have been reformulated to include more pear juice and no almond milk. Vital’s Almond smoothie line has also been retooled and now includes a full serving of protein (7 grams) and fruits and vegetables, according to Jina Wye, the company’s vice president of marketing. The line also now features an everyday price of $4.99, while the flagship juices are now priced at $6.99 for a 16 oz. bottle. 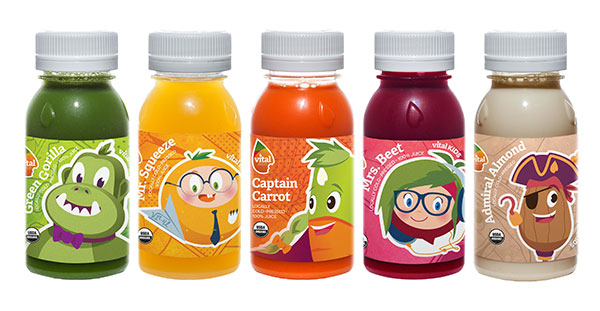 Wye, the former director of sales and marketing at BluePrint, joined Vital Juice earlier this year, along with director of operations Beth Gantz, who is also a veteran of BluePrint. Wye heads up the outreach strategy for the brand, which now promotes the tagline “The Best Juices on the Planet.”

Certainly, the role of high pressure processing (HPP) has been key to the early success and continued retail placement of cold-pressed brands, many of which employ and promote the food safety technology, which uses pressure instead of heat. In the natural channel, HPP is today not only a broadly understood term, it’s become highly sought after by suppliers and retailers of the products.

“2012 was the first year I attended [Natural Products] Expo West, where I found only a handful of people had heard of HPP,” said Joyce Longfield, an HPP expert and the founder and CEO of JL Nutrition and Food Regulatory Consulting. “Just two years later at Expo East, I didn’t have to explain what HPP meant to a single person.”

However, unlike the dozens of start-ups that have leapt at the opportunity created by demand for cold-pressed juice and extended by HPP, most legacy juice companies have yet to test the waters. Lakewood Organic, which has been selling bottled juice since 1935, is one of the first to make a move, having unveiled a seven-SKU line of organic, cold-pressed juices called Lakewood Basics. Packaged in 12 oz. bottles, the products are named according to function, all beginning with the letter “R” (i.e. Rebuild, Restore, Relax).

Although Five Star Foodies is a few decades younger than Lakewood Organic, the vegan-focused food company is also attempting to acquire some traction in the cold-pressed category with a rebrand and new formulation of its ready-to-drink ciders. Now cold-pressed and high pressure processed, the line comes in three varieties — Ginger, Hibiscus and Jamaican — each packaged in 12 oz. bottles. The drinks come with a suggested retail price of $4.99 and are sold in Whole Foods store and other specialty retailers in the mid-Atlantic.

In the case of Honeydrop’s new “Raw Honey” line, the cold-pressed, HPP beverages are a significant departure from its honey-sweetened teas and juice products — in both formulation and branding — as the brand attempts to reach what company founder David Luks describes as the “hipster consumer.” Luks and managing partner Andrew Lorig began developing the line in the spring of 2013 when the aftermath of Hurricane Sandy plagued metro New York with high pollen counts and mold issues, creating a allergy nightmare for many residents. The cleanse-inspired Lemon Cayenne juice that is made with local honey from New York and promoted as a natural solution for allergy sufferers. Honeydrop’s “daily immunity” Apple Ginger Lemon variety contains New Zealand-sourced Manuka honey, which is said to have immunity-boosting effects.

Luks said that sales of the products have doubled every 2-3 weeks since their debut in July. Distributed by Dora’s Naturals, the drinks are sold in Whole Foods, Fairway and other natural and gourmet stores in New York, New Jersey and Connecticut. And though the company built its own bottling line for the juice, Honeydrop will turn production over to a co-packer in order to keep up with demand for the beverages, which retail for $6.99-9.99 per 10 oz. bottle. As for maintaining its ability to market a product that is labeled as containing “local honey,” Luks said that Honeydrop will source the ingredient from regions specific to where the beverage is sold.

Yes, We Can: Cold-Brew Gets Aluminum Boost

Though High Brew Coffee founder David Smith noted that many consumers still confuse “cold-brew” as meaning “iced coffee,” it’s nonetheless the key selling point for the low-calorie line of coffee drinks, he said. Launched in March, High Brew is sold nationally at Whole Foods, where the shelf-stable coffee is available in four varieties, and soon to be five. The brand debuted a new Black & Bold flavor that contains less milk and sugar than its original products, all of which are priced at $2.49 per 8 oz. can.

Though High Brew was the first cold-brew coffee brand to be sold in a can, the package is now employed by two other companies: Kohana, which markets a line of cold-brew coffee concentrates and organic energy drink maker Hiball. 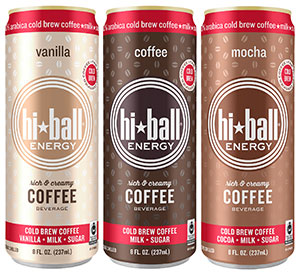 Coinciding with a rebrand that plays up its Hawaiian roots, Kohana’s new ready-to-drink brand extension comes in four varieties, each made with organic, cold-brewed coffee. Sweetened with a blend of monkfruit, erythritol and sugar, the beverages clock in at 100 calories per 8 oz. can. With a suggested retail price of $2.79 per can, the line will be distributed by KeHE and debut next week at the Central Market, a nine-store grocery chain which operates out of Texas and specializes in natural and gourmet foods.

As for Hiball, its new three-SKU “Rich & Creamy” line is formulated with 100 percent Arabica fair trade organic cold brew coffee that is blended with nonfat milk, cream, organic fair trade cane sugar and infused with a small amount of organic guarana, ginseng and b-vitamins. Packaged in 8 oz. cans, the drinks contain of 120 mg organic caffeine and are available in Coffee, Vanilla and Mocha varieties. The line will launch in Feb. 2015 as a 90-day exclusive at Whole Foods where it will be sold for a suggested retail price of $2.99 per can.

Though Chameleon Cold-Brew has no plans to get into the canned coffee business, the company is preparing to extend its line of ready-to-drink products with three new varieties that, like Hiball’s cold-brew products, will launch exclusively at Whole Foods. Chameleon CEO Chris Campbell said that the new beverages were a few weeks from their debut, along with a new bag-in-box package that the company teased at the show. The multi-serve package is slated for foodservice distribution through Labatt and US Foods, Campbell said.

Notably, the rush to attain non-GMO certification, an issue that was on seemingly on the tip of everyone’s tongue at the Natural Products Expo West 2014 show in March, was a relatively minor talking point at Expo East. Most brands, taking heed of Whole Foods’ decree of “full GMO transparency” in its stores by 2018, have already completed a certification process via The Non-GMO Project, adding its well-recognized seal to their labels.

One exception: companies that use dairy in their products. The genetically engineered hormone rbGH, also known as rbST, is commonly injected into cows to boost milk production, and the process by which milk can be certified as non-GMO is taking a bit longer than with non-dairy products, according to Adam Hertel, the vice president of grocery and natural sales of Ito En. The Japanese-owned tea company markets Jay Street Coffee, a line of iced coffee drinks made with milk, and unveiled four new varieties to the line: Extra Rich Jay Street Coffee, which, packaged in 9.1 oz. bottles, comes in three flavors — Caramel Macchiato, Hazelnut and Mocha — and Jay Street Coffee Shot, an unsweetened, zero calorie product that contains 150 mg of caffeine per 6.4 oz. steel can. 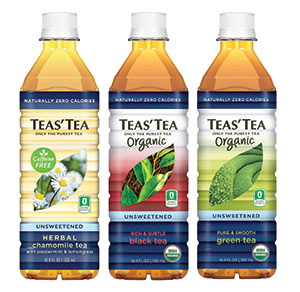 If non-GMO becoming less of a buzzword than in recent months, organic, on the other hand, is as in demand as ever, and with the launch of the first USDA certified organic Teas’ Tea products, Ito En has laid the groundwork for what could be an across-the-board evolution. The company introduced Teas’ Tea Organic, a two-SKU line available in green tea and black tea varieties, at the show, and while COO Jim Hoagland said that Ito En would “feel them out” in how it forecasts production and rolls out innovation for 2015, he noted that Ito En is in the process of converting its tea farms in Australia to organic and pointed to General Mills’ recent acquisition of Annie’s, Inc. as further validation of the strong pull for organic products. Hertel added that while Ito En will see some sales cannibalization of its other products with the addition of its organic teas, that’s reasonable considering that the drinks will also open new doors for the company and address calls by some foodservice operators, which are increasingly asking for organic formulations, particularly for millennial consumers.