As various kinds of water innovation continue to surface in the beverage marketplace, broad modifiers are becoming harder to use. “Functional” or “Enhanced” water means a lot of things these days. You’ve got prenatal supplements. Vitamin-enhanced beverages with cap technology. A water that cleanses. Water from trees, health claims or no claims at all. As water’s identity continues to shift, we take a look at a few of the emerging subcategories and gauge their progress and challenges. 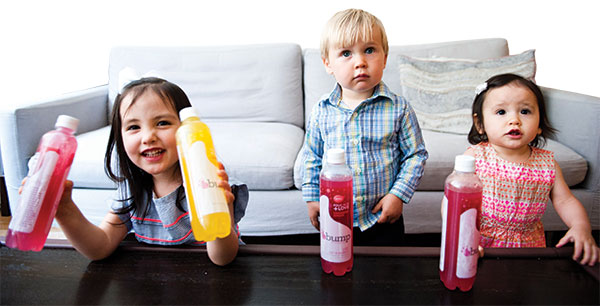 Stacy Rauen, mother of one blond, plump-cheeked boy named Jack, and her second pregnancy underway, knows how women like her view health. As the belly expands, so too does the consciousness, the desire to optimize motherhood in any fathomable way.

“You start to really look at everything that you put into your body,” she said.

But that doesn’t make prenatal vitamins any easier to tolerate. They’re often of the horse pill breed. They can have an unpleasant taste and be tough to stomach. The alternatives, mostly in powder form, are limited and hardly attractive.

As a mother looking for a supplement to prenatal vitamins, hoping to help other pregnant women while she’s at it, Rauen launched Bump Water in February. She did so alongside Amber Wilcox, a mother of two, and their husbands Jon Rauen and Spencer Wilcox (who met while flying helicopters in the Navy).

Bump Water, based in Brooklyn, N.Y., offers folic acid to pregnant women and those soon-to-be. Folic acid has been known to prevent miscarriage and neural tube defects, which refer to a baby’s brain, spine and spinal cord. The beverage, available in sparkling and soon flat formats, as well as full-calorie and low-calorie, is offered in five flavors: Cranberry Ginger, Lemonade, Pomegranate Mixed Berry, Strawberry Lemonade and Lemon Lime. It also contains Vitamins A, B6, B12, D and E, calcium, niacin, biotin, zinc and magnesium.

Rauen and her team comprehend their target demographic and market the product accordingly. Bump Water doesn’t hide from its purpose. Depending on your interpretation, the logo is a water drop, a protruding belly or both. The brand and the packaging embody simplicity and a straightforward message.

“We wanted to be upfront of what we are,” Rauen said.

Despite prevailing opinion, targeting a niche market isn’t always the worst thing. The product has already sold well in spots around the borough, including Brooklyn Harvest Market. Rauen is already talking with major retailers about wider distribution.

Rauen, confident at this significant juncture in the promise of her brand and the category, believes she’s onto more than just marketing proactivity. During the anticipatory days of powders, vitamin pills and self-consciousness, she’s marketing a sense of normalcy.

“It makes you feel a little bit more normal to have something that you can pick off the shelf,” she said.

A beverage lifer in the truest sense, C.J. Rapp, the CEO of Karma Culture LLC, knows how to spread an idea. In the mid-1980s, he founded Jolt Cola — often cited as the original energy drink — and drew attention from USA Today before he had a second distributor. He holds longstanding relationships with the same beer distributors that broke into new age, non-alcoholic beverages with Jolt as their earliest partner. But even with his connections and resumé, Rapp’s current project, Karma Wellness Water, is still searching for more attention in the U.S.

In Canada, you can find Karma all over — Costco, Walmart, Whole Foods, 7-11. Through a distribution partnership with Lassonde, which Rapp said trails only The Coca-Cola Co. and PepsiCo in Canada, consumers have been able to grow with the technology. Karma’s cap enables its users to mix vitamins into the beverage for “maximum potency and peak freshness.” The company uses three words to guide the consumer through the cap process: peel, push, shake. And after tons of demos and enough shelf space throughout the country, Rapp said that Karma has made its way up north.

The challenges for Karma in the U.S. are twofold, he said. The first is teaching consumers how to work the cap. The three words don’t solve that problem yet. But perhaps the biggest problem is rooted in the state of the beverage industry.

“It’s more difficult than ever to build a brand from the bottom up,” he said.

Competition has reached unprecedented levels. Beer distributors are often unable to even consider small, emerging brands from the non-alcoholic side. Rapp said that the category’s weakness has likely hampered Karma as well. Activate Drinks, which uses a twist-cap technology, seems like Karma’s biggest competition, but Activate endured a volatile period of shifting executives and distribution plans before co-founder Anders Eisner sold the brand in July. Other cap innovators include 989 On Demand and Tea of a Kind, but these brands are at earlier stages.

Rapp plans to license his cap technology to a big-time brand in the U.S. It’s already used by Prosupps, a pre-workout formula, but he’s thinking about a larger scale. He thinks distributors in the U.S. are noticing Karma’s success in Canada, and hopes to strike a deal with one of them. From there, Rapp will follow a formula he knows so well. 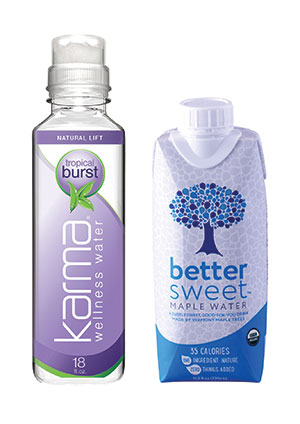 The maple water category has drawn plenty of industry attention for its alluring concept, its tough-to-project scale and its functional benefits, which vary depending on whom you ask.

Len Boyko, the CEO of BetterSweet Drinks Inc., which markets BetterSweet Maple Water, refrains from touting functional benefits above all else. His maple water may be good for you, sure, but he believes in refreshment over function. He thinks maple water has enough going for it that the category won’t require claims to succeed.

“I don’t think it needs to be a functional beverage,” he said. “Just enjoy your drink. It doesn’t need to do anything.”

This singular philosophy presents an interesting question: which identity — functional or refreshing — gives the maple water category the best chance to grow?

Boyko believes that many of these claims are hard to back up and, in turn, these brands have hurt the credibility of the maple water category. Yet, they’ve also helped establish it as more than a one- or two-horse race.

Vertical Water, which recently announced its non-GMO verification, can be found across the country at about 400 traditional and natural grocers including Sprouts Farmers Market, Wegmans, Whole Foods as well as Kroger and the branches in its umbrella.

BetterSweet is working through Giant Eagle stores in the Midwest and the East Coast. The brand recently partnered with JW Sales and Associates to serve as a broker for these markets.  but seeks a wider footprint with a simple message.

The brand’s latest release, Balance Cleanse, is a premium spring water made with four different kinds of Australian wildflowers. According to the company, the product imparts a gentle diuretic effect, helping consumers purify their body much like the marketed benefits of a lemon-cayenne juice cleanse.

The botanicals are hand-picked in various parts of Australia, shipped to
the U.S. and added to spring water
from Sierra Nevada, Calif. and the Catskills in New York.

With Whole Foods in mind, Chalk said: “we can be local in California and local in New York.”

Kroger, the massive retailer with an eye on the latest in beverage innovation, is betting that consumers will connect the dots — that Balance Cleanse offers refreshment with the functionality of flowers not found in most bottles of water. Chalk said that Kroger never would have brought on Balance without the company’s proven following through same-store sales.

While Chalk is going after Smartwater consumers, he did mention the benefits of alkaline water brands sprouting across the country. Brands like NEO and Alkaline Water Co. have a higher pH than Balance and build their brands around the benefits of  electrolytes and premium hydration. Yet, even with the marketing differences, the many alkaline water brands of the beverage industry are pushing that same concept that Chalk thinks can elevate his brand into mainstream relevance.

It’s one thing to get on the shelf, it’s another to get pulled off. Alongside alkaline waters, even with their differing traits, these brands believe consumers will approach their non-flavored waters with the same desire: a function in mind.