For probiotic beverages, rising interest in both gut health and overall natural health have led to increased attention on the tiny bacterial strains embedded within the bottle. Mainstream growth is starting to come, with conventional retailers expanding the presence of brands like GT’s Kombucha, Lifeway Kefir, even newcomers like KeVita Sparkling Probiotic Drink and Goodbelly juices.

But it’s not cohesive growth. And don’t look for these products together. There’s no real unified probiotic category; rather, beverages with probiotic attributes tend to be scattered throughout the store.

Kombucha, for example, will be found everywhere from a dedicated refrigerated juice and functional beverage set in the produce department, its own cooler, or the grab-and-go section at the front of a Whole Foods. Goodbelly tends to fight for space in the dairy set – when it isn’t set up against chilled juices. Meanwhile, leading kefir maker Lifeway is entrenched in dairy – except for line extensions that put it in the cheese department, or in frozen foods, among other locations. KeVita looks to the produce set where it can sit next to other high-margin functional items like a Pom Wonderful or Mama Chia. At times, founder Bill Moses said, he’ll tell retailers they’re not ready to go into the store until they’re in the right department.

Still, that disparate footprint isn’t holding things back for brands or for retailers, notes Bill Weiland, the founder of Presence Marketing, the largest independent food and beverage broker servicing natural and specialty accounts.

“It’s got great bandwidth in both dairy and nondairy applications,” Weiland said. “Yogurt was the first major application, but it took a while for the beverage messaging to break through. People are more familiar with it now.”

And those products are all growing: publicly-traded Lifeway just announced a record quarter; KeVita has just raised another $6 million following two years of greater than 100 percent growth; Goodbelly has grown steadily at a rate of 20 to 30 percent annually; GT’s has swarmed out of the natural and specialty channel and is far and away the largest kombucha brand in the country, in a category that has grown nearly 30 percent in the past year, according to SPINS.

But as the products become more important in conventional retail channels, new thoughts are emerging on the types of products that will win those types of consumers. Brands for whom digestive health is merely one of a suite of potential benefits are maintaining their first mover lead, but they are finding themselves in competition for consumers with products that have introduced probiotics as a kind of upgrade of a more mainstream product. Additionally, issues of positioning remain – while probiotics are growing quickly, they’re still part of an emerging trend in functional foods. While the industry may be rife with discussions of the particular benefits of various foods or drinks, consumers aren’t completely dialed into that trend.

“In terms of explaining that cultured foods are a healthy option, we’re trying to take out the fear quotient,” said Derek Miller, Lifeway’s vice-president of communications. “We are still in the mode of always having to pursue potential consumers. It hasn’t hit that ascent like Greek Yogurt.”

Nevertheless, the heat around probiotics is palpable: their connection to gut health means they are widely regarded as one of the fastest-growing health trends on both a global and domestic basis, with total overall sales of probiotic food and supplements are expected to reach more than $32 billion by the end of this year, and they’re expected to grow by 17 percent in the U.S. this year, according to a report from MarketsandMarkets, a research firm.

According to Weiland, the lack of a true “probiotic category” for food and beverage – supplements are a bit different and are often grouped together – hasn’t hurt the growth those products that carry the probiotic imprimatur. In fact, it’s only become more important for them.

Still, the marketing strategies – and the assessment of the core probiotic consumer – varies from brand to brand.

“Our consumer isn’t just the buyer of fermented probiotic beverages,” says Bill Lange, the chief marketing officer of KeVita, which nevertheless features label copy that calls it a ‘sparkling probiotic beverage.’ “It’s the super-premium functional beverage buyer. It’s not like they’re only buying Mamma Chia, Blueprint, or others, it’s that they’re buying all of us.”

Others are interested in showing that probiotics represent functional benefits beyond what is available in their unenhanced counterparts.

“We’d rather be sitting next to a Simply or a Tropicana, or next to the soy or dairy alternatives,” says Goodbelly CEO Alan Murray. “We want to be where people are looking to upgrade.”

On the kombucha side, the variety of uses transcends probiotics, although it remains a key part of the sell for many brands.

GT Dave, the founder of kombucha category leader GT’s Kombucha, said he doesn’t want his product to be thought of as only having probiotic benefits – and while probiotics are one of the words on his labels, there are many other descriptive terms in the design.

Growing consumer awareness of probiotics may be a factor in the overall growth of kombucha, Dave said, but “I wouldn’t say it’s a primary factor. The overall growth is because consumers are looking closer at how much of their food or drinks are processed and they’re trying to minimize that. There’s kind of a crafted-by-nature aspect that those products have.”

That might be true, but for many beverage brands, the word “probiotic” is shorthand for much of that functionality, says Hannah Crum, a kombucha expert who co-founded Kombucha Brewers International (KBI) with her partner Alex LaGory, an organization to represent commercial kombucha makers.

“I think that hook has been well established,” Crum said, citing the road plowed by earlier brands like Danon yogurt’s Activia. “It’s using the vernacular that the public understands to get consumers on board.”

In fact, many kombucha brands are relying heavily on the probiotic attributes of their products to make that introduction. Take Health-Ade, a brand lauded for the simplicity of its message – and one that calls itself “A Bubbly Probiotic Tea.”

That direct approach to probiotic marketing is one that has evolved alongside the category, notes Derek Miller, the vice president of communications for Lifeway, the country’s largest maker of Kefir, a fermented milk drink.

“It’s certainly something that is important and is a trend and is worth conveying to the consumer,” Miller said, “but it’s hard to predict how that’s going to fit in the future. How much emphasis to put on the probiotic aspect, if that’s simply the sole reason for a product to exist, that is something that could fall into tension with just a probiotic supplement.”

Lifeway calls out its own probiotic content on the front of its packages with a bright swoosh of text, but Miller said the company said that while it’s “probably still the first element, we’re seeing a lot of attention due to the lower lactose, gluten free aspects. And of course that interest in high protein and low-sugar products, we hit those markers and we’re doing a decent amount of messaging behind that trend.” 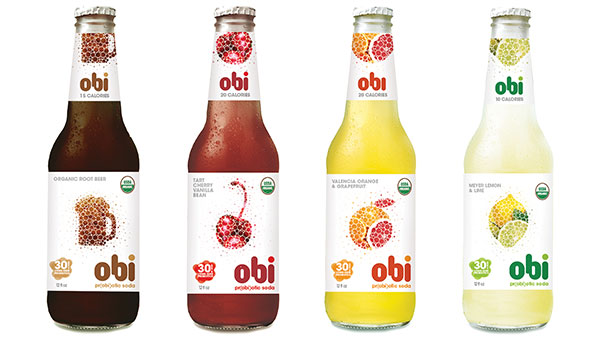 Then there’s the trade-up: Obi, which bills itself as a “probiotic soda” is one of two, alongside kombucha brand Live Soda, that have taken up the guise of a CSD with benefits.  And there’s demonstrated appeal to that approach: Live Soda recently landed distribution in mega-retailer Target. For these brands, the approach is one that focuses not on the maturity of the probiotic market, but its immaturity. According to the Obi team, the kombucha/KeVita/kefir axis is too far removed from the mainstream.

“If there’s a functional benefit but there’s no great taste, there’s no way to make it appeal to the mass market,” said David Lester, one of the founders of Obi, which is aligned with beverage incubator L.A. Libations. The idea behind a probiotic soda is that “there are things that can easily be incorporated into their diet. There’s no occasionality, we just need to convince them of the benefit.”

But slapping a probiotic label – or injecting probiotic strains – into mainstream products and expecting them to appeal is more complicated than that, notes Murray, of Goodbelly.

“One of the difficulties with that is that it has to be believable,” Murray said. “It has to work, people need to feel the benefit, but it has to be in accepted healthy-for-you categories. Pizza? No.”

That’s a fine line that Murray lays out, and one that his company has had to walk from its inception – convincing consumers that a probiotic version of a mainstream product like their morning juice is a worthwhile enhancement. His company has had some success in establishing its bona fides by offering a “12-day challenge,” but it’s also selling smaller “shots” – a much more traditional format for ingesting probiotics and one that’s common with Yakult, a Japanese company that recently announced it was expanding to the U.S.

To date, the product types that have most directly benefitted from the growth of consumer interest in probiotics are the kefirs and the kombuchas – those traditionally associated with gut health in particular and simple healthfulness overall.

“I think kombucha is kind of a ‘thing,’ at this point,” notes Wieland. “If you ask some hipster under a tree on a college campus why they’re drinking it, and they could give you 40 different answers. Ask 10 people, and eight wouldn’t say it’s probiotics.”

Still, he adds, that makes room for more of the mainstream focused products, like KeVita, Goodbelly, and, yes, Obi to attract consumers.

“There’s this more specifically geared-up probiotic bent to categories that I think you’ll see more of,” he said.

Still, the value of the traditional methods for getting consumers their living bacteria remain attractive, even to brands that have grown up leaning closer to the mainstream. Shortly before this story went to print, Bill Moses, the founder of KeVita, let it be known he would be launching KeVita Master Brew Kombucha. The stated expectations for the line extension are that it will be 25 percent of the company’s revenue next year – no small task for a brand that has grown triple-digits for three years straight.

In case you were wondering, on the label? Alongside “Live” and above “Naturally Energizing,” it says ”Probiotic.”