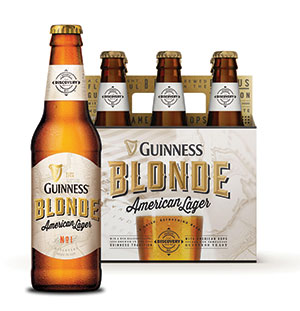 The statement “I’m going blond” doesn’t usually imply the long term. Maybe a brunette seeks brief, superficial change to counter the monotony of stylistic routine. Perhaps she just wants to look like Kim Novak. Or Lance Bass. But no matter the motive, going blond is typically seen as something temporary.

It remains to be seen if the beer industry should consider Guinness’ recent release of Guinness Blonde American Lager as an act of whimsy. The follow-up to Guinness Black marks the beginning of a new phase for the brewer.

Long known for its stout, it’s now ready to be known for more.

“Guinness Black Lager brought a whole new audience to the Guinness trademark,” Doug Campbell, Guinness’ brand director, wrote to BevNET. “We learned that consumers were not only open to a new style of beer from Guinness, but also really wanted us to experiment more than we had been.”

Experimentation, innovation, broad portfolios, they’ve all become important terms in the beer business, and that’s a vocabulary that’s being pushed into the forefront by the ongoing growth of domestic craft beer companies. While craft’s rate of expansion has been torrid, imports have had slow but steady growth; last year imports were up 4.5 percent, the year before they were up 2 percent, according to Technomic.

Part of the reason for the growth is that imports have been flexible with their portfolios, albeit without the constant churn of selections that has characterized craft’s growth.

Guinness, long the iconic importer of Stout, launched Guinness Black in August 2011. Hoping to modernize the brand and make its beer more accessible to mainstream consumers, Guinness launched the brew with a massive ad campaign that featured the mandatory slick-suited fella/exotic-knockout combo. The ad went to the middle of the road as it highlighted its ingredients — “carefully crafted with roasted dark barley” — and attractive drinkers, but it also verified that the brand had a right to experiment.

Campbell said the Guinness Black launch clarified that loyalists and standard consumers alike were looking for more innovation. Thus, the August release of Guinness Blonde signals the beginning of the brewery’s leap into consistent experimentation. It coincided with the announcement of the Guinness Discovery Series, a concept that will see the bi-annual release of new brews.

Guinness Blonde, the first of the series, is sold nationwide in 6-packs of 12 oz. bottles (5 percent ABV) for a suggested retail price of $8.99. The choice of styles echoes the preference of many craft beer consumers: as easygoing Belgian styles have become some  of the movement’s most widespread. In making a blond American lager, Guinness is melding America’s longstanding love for the lager with its emerging interest in craft styles.

“We feel this is the type of beer innovation that beer drinkers in the U.S. are hungry for,” Campbell wrote, “and we’re excited to give them more options.”

They’re doing it in Great Britain, as well, as Diageo recently introduced Guinness Dublin Porter and West Indies Porter. Inspired by the diaries of brewers from the 18th and 19th centuries, they mark some of the first offerings from Guinness’ new brewhouse at the St. James Gate Brewery, Campbell said. While the blond lager will be sold only in the U.S., the porters will be sold exclusively in Europe.

Guinness Blonde isn’t the change in traditional hue coming to the import market. This past summer, Newcastle, known best for its Brown Ale, re-released a pair of seasonals:  Werewolf Blood-Red Ale (the top-selling imported limited-edition in 2013, according to the company) and Bombshell Blonde Ale. As one might expect from a name like “Bombshell,” the brand’s 6-packs are bannered with a blonde gal in a low-cut blue dress, recalling pinups from the past. It’s a well-honed strategy, the company admits.

“No matter how much we talk about how smooth and great-tasting Newcastle Bombshell is,” brand director Quinn Kilbury said in a release, “we’ll catch more people’s attention with an attractive woman on the packaging.” 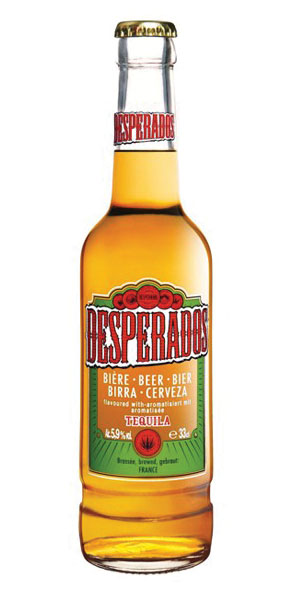 Adhering to the preferences of craft-beer consumers remains a top priority for import beer marketers, however, targeting the Hispanic market also sits at the forefront. This past April, Heineken USA introduced Desperados, a tequila-flavored lager. Desperados is squarely focused on the highly sought-after Hispanic market; it’s currently available in 66 countries – where it has double-digit growth, according to a company release – and it recently launched at select retail and on-premise locations in the Southeast, with imminent plans for national distribution.

Another beer importer, Constellation Brands, is staying in the news with innovation and growth for its own Hispanic-focused brands. In April, Constellation announced that it will follow the launch of Modelo Especial Chelada with the nationwide expansion of that product’s distribution. In July, Corona Extra unveiled limited-edition bottles that feature Golden Boy Promotions boxers such as Marcos Maidana, Paulie Malignaggi and Daniel Ponce de León. The bottles were introduced at the weigh-in of the recent Canelo Alvarez/Erislandy Lara fight, and their arrival included a sweepstakes of a VIP trip to the recent Floyd Mayweather, Jr./Marcos Maidana fight. And while Corona has long been known for its clear bottles that showcase the golden liquid, this past spring, the company rolled out plans to strengthen its presence at the tap with the expansion of Corona Light draft to 35 additional U.S. markets.

Even those who pass on import innovation and go for the classics should expect the new stuff to stick around. Mirroring the evolving identities of its rivals, Guinness is going blond. And it’s more than the flavor of the week.