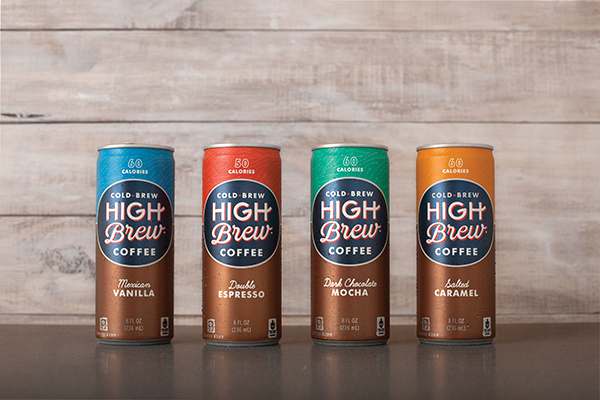 For High Brew, it all started on a boat. David Smith, one of the co-founders of Sweet Leaf Tea, was on a sabbatical, sailing the Caribbean with his family after selling the company to Nestle Waters North America. As might be expected, the acquisition had made Smith a few dollars, and after 14 years in the rough-and-tumble beverage business, the trip was his long-promised reward.

But sailing requires vigilance, and a watchful eye is best supported by a bit of a caffeine boost, which Smith and his wife sourced from coffee.

While the couple sipped on the jet black liquid throughout the day, the midday humidity called for a cool beverage; a piping cup of Java was not in mix.

Smith began to cold brew their coffee, steeping coarse-ground beans in temperate or cold water for 12 to 24 hours. He was impressed by the taste and efficacy of the cold brew. It was smoother, and seemed to have more caffeine than his regular cup.

So Smith had something, he thought, but he wasn’t yet interested in getting back into the beverage world. He was still working on things with his Sweet Leaf partner, Clayton Christopher, who had invested in kale chips and vodka, and he was also helping out at an Austin-based food and beverage incubator.

Still, the market was changing. Smith could see the slow, but steady, development of cold-brew coffee concentrates brands like Chameleon and Grady’s in natural retailers.

“I saw the proliferation of the concentrates coming and felt like those were really good products,” Smith said. “That’s when [I thought], ‘somebody could formulate that same old cold-brew coffee that could be consumed on the go, in a more convenient way, but still deliver those attributes that people have come to know and love.’”

Smith and Christopher have often talked about the need to seize an opportunity quickly, by bringing in seasoned professionals who can execute quickly behind a product. Being in the trenches with Sweet Leaf taught them that the most accomplished companies are often the ones that don’t just understand market trends but can effectively enact a retail and distribution plan. As such, Smith re-assembled a small army – formed mostly with the battle-tested investors, co-packers, and troops from his tea days – and in the fall of 2013, began working on the development of what would become a new canned, cold-brew coffee brand called High Brew.

Among consumers, there is increased awareness and demand for RTD coffee. In its 2014 U.S. Coffee Study, Multi-sponsor Surveys, a market research firm, polled 1,500 adult coffee drinkers and found that, while fresh-brewed iced coffee remains most popular choice among cold coffee options (including specialty, frozen and instant), a growing share are purchasing RTD varieties.

Multi-sponsor Surveys’ noted that over the past two years, among all consumers, millennials and Hispanics are leading the way among more frequent consumption of RTD coffee: overall canned and bottled coffee is up from 15 percent in 2012 to 20 percent in 2014 among all cold coffee drinkers, but increased by the widest margins among Hispanics (up from 17 percent to 36 percent) and millennials (up from 22 percent to 31 percent).

The numbers aligned with Smith’s findings on the growing opportunity for RTD coffee.

“I stumbled on some of the category data for coffee and realized that not only is this a great product that doesn’t seem to be well supplied as it today, it’s growing, and it’s growing quickly,” Smith said. “The economics were much better than what we’d experienced at Sweet Leaf.”

For Smith, fresh from the ocean, it seemed like a perfect storm. High Brew, which debuted nationally in Whole Foods beginning in March, is formulated with cold-brewed Fair Trade Arabica coffee beans, water and cream and sweetened with a blend of stevia and cane sugar. Packaged in 8 oz. slim cans, High Brew is shelf-stable and comes in five varieties: Double Espresso, Mexican Vanilla, Salted Caramel, Dark Chocolate Mocha and Black & Bold. The drinks, priced at $2.49 per can, are now distributed in several thousand retailers across the U.S., including Target, The Fresh Market and H-E-B.

In the Shadow of a Giant

Of course, High Brew isn’t the only company attempting to take advantage of growing demand for canned and bottled coffee. In a recent report, Innova Market Insights, a market research provider, found that new RTD coffee products accounted for 4.2 percent of global beverage launches over the past 12 months, up from 3 percent in 2009. New North American-based brands represented 11.5 percent of those introductions, with innovative line extensions coming from companies as varied as Vita Coco and Rockstar or Suja and BluePrint.

Of course, the elephant in the room is Starbucks, which has over 90 percent share of the market. Its Frappuccino and Double Shot products, dollar sales of which are up approximately 9 percent in the 52 week period ending on Sept. 7, 2014, according to IRI, a Chicago-based market research firm, represent $1.2 billion in retail sales. Last year Starbucks added a new bottled iced coffee line, one that is growing at a nearly 50 percent clip, reaching $75 million in sales, bigger than any of the new cold brew companies by far. Earlier this year, the company introduced a non-dairy, multi-serve version of its iced coffees called “Brewed to Personalize,” which calls on consumers to prepare the drink to their specifications.

But Smith sees cold brew as being a valuable alternative for consumers. High Brew, Chameleon, and others have much lower calorie counts than bottled Frappuccino drinks, which have upwards of 200 calories per 9.5 oz. serving.

The question is whether the cold brew brands should try to present themselves as an alternative category to the average Starbucks drink – which Smith describes as a dairy type of beverage – or as another part of the coffee mix.

Chris Campbell, the CEO of Chameleon Cold-Brew, said he believes that Americans are seeking more premium and healthier drinks on the coffee shelf, something that prompted the company to introduce an RTD cold brew (also organic- and Fair Trade-certified) line this year. Holding firm on its commitment to ultra-high quality coffee, Chameleon eschewed a diluted version of its original, popular coffee concentrate, creating a new coffee roast and brewing process for its RTD line.

The beverages are packaged in 10 oz. glass bottles, priced at $3.99 and currently come in three varieties: mocha, vanilla, and original black, with more on the way. The mocha and vanilla versions are lightly sweetened and contain only 20 calories each. The coffees don’t have milk, partially to address the needs of consumers with allergies, and partially to allow for greater customization – an aspect becoming increasingly important to millennials.

“It’s dairy-free, but dairy-friendly to whatever you want to add,” Campbell said. “Obviously, RTD implies that there’s no additional steps, but we’ve left choice in the game for the RTD consumer. So, I think, for us, that’s going to be one of the keys, in terms of a point of differentiation.  We haven’t had to introduce a dozen SKUs to give you choice of variety.”

And while Campbell noted that Chameleon’s consumers are likely to that have a specific interest in its ingredients and formulation, he’d welcome placement next to Starbucks, saying it’s something that he believes will good for the evolution of the RTD coffee category overall.

“I’ve got no problem with being next to a Starbucks product on the shelf,” Campbell said. “I think it’s probably good for me, because that shopper is in that space for a reason. And they’re shopping Starbucks because, at least in their minds, they’re shopping premium. And we’re giving them another opportunity to experience something even a little bit further down the continuum.”

Other products are also looking to join Starbucks, but are balancing consumers’ expectation of indulgence with similarly positioned, albeit healthier, products. Ito En has gained some traction with its Jay Street Coffee brand, brewed with medium-roasted Arabica coffee beans and blended with cane sugar and skim milk. Their key point of differentiation? The drinks contain 90 calories per 8 oz. serving and no fat. A newer, “Extra Rich” sub-line is sweeter and denser that its flagship products, with 150 calories per 9.1 oz. bottle, however.

There are some exceptions to the “healthier-than-Starbucks” platform. Amid the booming success of International Delight’s iced coffee take-home products, third wave coffee pioneers Blue Bottle and Stumptown now produce their own milk-heavy RTD products. Indulgence products, however, are more exception than rule, as beverage makers look for appeal among an increasingly health-conscious base of consumers. That route has led to new entries such as Ulivjava Martha Stewart, a line of coffee drinks that are blended with green tea, herbs, vitamins and botanical ingredients, and Califia Farms, which markets an almond milk-blended cold brew line. 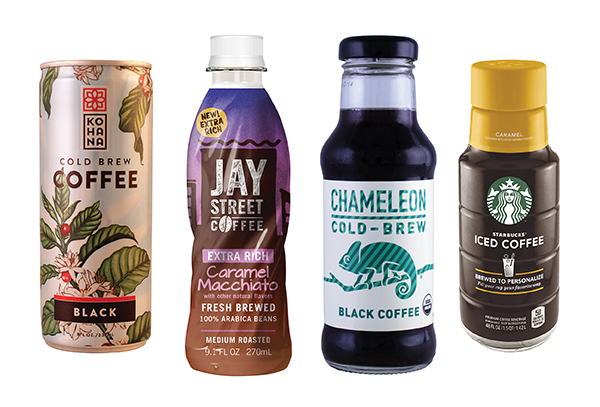 Amidst all of the new product launches, it’s the cold-brew versions that are getting much of the attention. For packaged coffees, the process of cold brewing is a relatively new concept, and most of the products have been embraced only by those ever-curious consumers who shop in the natural channel.

Reaching mainstream consumers, however, is challenging. How does a company quickly and efficiently explain that cold-brewing will result in a smoother taste experience than conventionally prepared coffee? Is it possible to adequately describe on a label that cold-brewing results in a coffee with low bitterness? Perhaps most importantly, does the term cold-brew even matter to most consumers?

“The short answer is, ‘no,’” said Greg Steltenpohl, the founder and CEO of Califia Farms. “You’re not getting any kind of substantive bump in sales at this point, because it’s such a narrow slice of awareness around what that term really means.”

And while over the past year, natural retailers have steadily added to a growing variety of cold-brew options (Whole Foods has even rolled out bottled-in-store versions of the drink), adoption in conventional grocery is a mountainous obstacle, due in large part to the brand power of Starbucks and its distribution partner, PepsiCo, Steltenpohl said.

“There is a generational shift in consumption patterns,” Steltenpohl said. “It’s not just a natural product customer. It’s just that when you look at the marketing channel, the RTD universe is more dynamic in the natural foods channel, because it’s not just controlled by the same old distributors.”

That’s why High Brew and, to a lesser extent, Kohana, a concentrate company that also recently launched a canned cold-brew line, are looking to convenience stores. Both companies exhibited at the 2014 National Association of Convenience Stores show, betting that there was potential for their naturally caffeinated beverages to retail as both as coffee and energy products.

“If you talk to buyers at 7-Eleven, they’re looking for energy plays that are from 100 percent natural ingredients, and they don’t have many of those today,” Smith said. “Nobody’s looking for another energy drink with added caffeine and taurine and whatever other ingredients they’re throwing in there, and I think that’s going to serve the coffee business well.”

While High Brew has yet to make a full-sized splash in convenience, the brand is represented in natural, conventional, and mass retailers with distribution in several thousand locations, according to Smith. It’s been a great start for the company, and based on sales projections for 2015, Smith sees revenue for High Brew as reaching a level that took Sweet Leaf a decade to achieve.

If that plays out right, Smith just might need to promise himself a bigger boat.