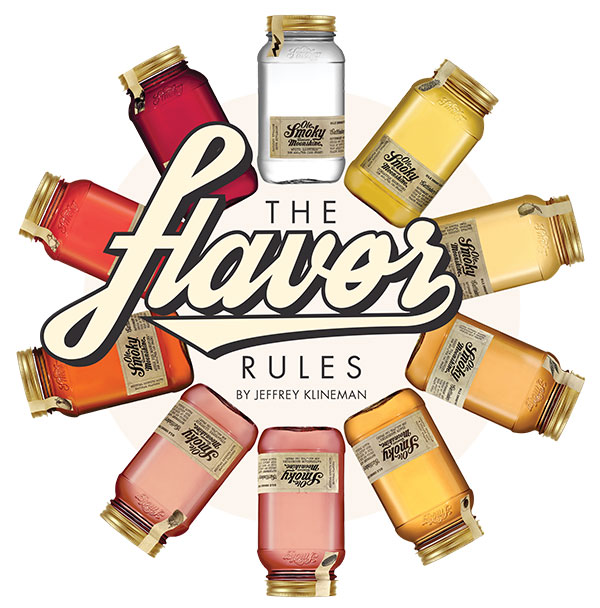 Flavor rules. Promising brand propositions can fall apart if the flavor isn’t there, while marginally functional products can catch fire behind great taste. Brands will do whatever they can to maintain their flavor advantage (Coke’s secret formula, anyone?) while a switch in sweetener mix can totally undermine a product (Vitaminwater’s recent stevia experiment comes to mind).

But if flavor rules, what are The Flavor Rules? Retailers and distributors looking at both new companies and at growing brands alike would be wise to understand that brands can use flavor varieties to:

1. Get them into places that they haven’t been, and
2. Help them differentiate from competition and grow a category

But they need to keep in mind that:
1. Flavors aren’t a substitute for quality
2. They have to reflect a product’s core mission and message

How can we understand the positive impact of flavor variety? Look to the moon – or, more accurately, to the moonshine.

Ole Smoky Tennessee Moonshine is one of the fastest-growing liquor brands in the country, and it’s been using three levels of flavor variety to allow it to expand its reach into different retail channels.

Moonshine, unaged corn liquor that was long produced illegally, is itself considered harsh and unforgiving. But as the market for legal moonshine has evolved (driven by an overall U.S. whiskey craze) adding flavors has allowed what had been a family business in Tennessee to expand into new areas – particularly since it resonates with the history of the stuff.

“When people think of moonshine products, they were really for the guys,” said Ole Smoky CEO John Cochran. But in addition to early moonshiners buying off the law, Cochran added, “the way they’d stay out of trouble with the church ladies and women of the communities would be to make fruit brandies. Two of the most traditional flavors were peach and apple pie.”

From that ingenious bit of the historical record, the brand has built a line with three levels of proof intensity – a 100 proof, three flavor line consisting of “Original,” “White Lightnin’” and a barrel-aged “Charred;” 80-proof Lemon Drop Lightnin’, Strawberry Lightnin’ and Hunch Punch Lightnin, which are shot-oriented, and 40-proof “sipping” versions like Apple Pie, Blackberry, Moonshine Cherries, Peach and some limited varieties.

“The flavor products give the mixologist, the fans, our folks a ton of flexibility,” Cochran said. “The flavors augment the strong value proposition of the clear products.”

The flavors have allowed Ole Smoky to go into more conventional accounts where the hills of Tennessee aren’t necessarily thought of. The brand has used flavors to build record-setting summer programs with accounts like Outback Steakhouse and Buffalo Wild Wings, while its core brand has led to tie-ins with companies as diverse as Harley-Davidson and Southern Wine and Spirits. Meanwhile, a broad reach from the flavors has led to marketing platforms like a sponsorship of country superstar Dierks Bentley.

“It’s the flexibility of the line that gives the accounts the ability to have fun and create,” Cochran said. “We’re building field marketing programs around instilling in folks the basics, but aligning it with the slightly naughty, barely legal, fun part of what makes moonshine so great.”

Flavors can also help build a brand’s reputation for innovation and reach new audiences. Wild Flavors’ Bob Bloom had a front row seat working with energy drinks from the early days, and he cited both Monster and Rockstar as brands that were able to use flavor varieties to create more room in their category.

“They both started with what we could call the Red Bull-esque ‘fantasy fruit flavor,” he said. “But a year or two later they went to a diet version. What they realized is they might bring in new users by offering a wider variety of flavors and textures. From one or two, they went to I don’t know how many at this point.”

Both Monster and Rockstar have been brands for whom innovation is a key brand building-block, in fact.

“There are very beneficial uses of flavor as a brand enhancement,” Bloom said. “Generally, retailers don’t want single SKUs,” because they worry a new product will get lost on the shelf.

So for new brands, Bloom said, “we recommend three varieties of whatever miracle product they’re inventing to get
it in the store.”

But those flavors have to be right, and they have to leave an uncomplicated route for the brand to grow.

Douglas Rash, vice president of global sales with flavor company Treatt, recommends that brands working in crowded categories rethink the idea of flavor differentiation as the key to growth.

“Look at tea today,” Rash said. “There’s such a significant growth rate, that market is pretty saturated. You do your black teas, your green teas, but what’s the next tea going to taste like? Guys aren’t going to buy the same tea pieces of the puzzle just to repeat the puzzle.”

Still, with a move toward herbal and nutraceutical benefits pervading many categories, flavor continues to be an important way for brands to avoid putting themselves at a disadvantage.

“With added functional benefit, you are going to have a challenge, and that’s to make a product taste palatable,” Rash said. “If you try to get more nutraceutical, you still have to taste good.”

And flavors can’t be a panacea for brands.

Simon Ginsberg, the founder of the Blue Monkey brand of coconut waters, said that flavors aren’t necessarily the best way to get consumers into a brand – and in fact can sometimes get in the way of a brand’s ability to maximize its potential.

“We had the blends, but we dropped them. It was only 10 percent of our overall sales. Mostly, the product just sits there.”

The taste of coconut water, with its salty body, is polarizing – although, Ginsberg said, that can make things simpler at times. While the brand still uses earthy flavors like chocolate or coffee, those are line extensions that speak to a different need state, and move the base product into a new subcategory. But the hydration related soul of coconut water is paramount.

“Someone who’s into coconut water is only interested in coconut water,” Ginsberg said. “It’s one of these love or hate flavors. You have a group of people who are obsessed with it, and they just want the real thing.”

The strategic applications of flavor variety aren’t lost on the team at Talking Rain, either, where Sparkling Ice has managed to expand its shelf presence in its core channel, grocery, by developing a strong commitment to new, finely-tuned flavors.

Managing flavor is something the brand learned from one of its models – Vitaminwater.

“You could go to the shelf and see 1,000 different flavors,” said Kevin Klock, the company’s CEO. “It made a fantastic banner. But you have to have space adequate for expansion.”

Now with more than 15 flavors, Klock still tries to follow that rule, keeping the brand highly conventional in the choices it makes.

“Don’t spend a lot of time in the crazy,” he said. “If your brand promise is mass appeal, don’t spend too much time on who you aren’t. There’s nothing wrong with a small niche brand, but as you get bigger, you need flavors that will hit the mainstream.”

Some flavor styles come and go, like acai, dragonfruit, even coconut. Is lemonade, one of the hottest new flavor profiles of recent years, here to stay? It’s hard to predict, he said.

Regardless of flavor choice, however, one guideline the brand tries to follow is that it will look for multiple facings of single flavors.

Currently one of the fastest-growing brands in the market, Sparkling Ice’s flavor assortment can lead to tough calls when it has to prune its space. Often, he said, it will look to distributors to help it make those decisions, and hope they won’t make the wrong call – as that can lead to returned product.

“We haven’t had any dogs,” he said. “It’s been hard for us to make that decision. If they don’t have the room on the shelf for you, you have some hard decisions to make.”

Avoiding “dogs” means that flavor integrity is important. When the company was rebooting Sparkling Ice it was also in the midst of a flavor company switch, which allowed the new management team to focus on flavors that would “pop.” That’s an emphasis that has continued as it has grown.

“Doing the flavors ‘right’ is much more important than having the variety,” he said.