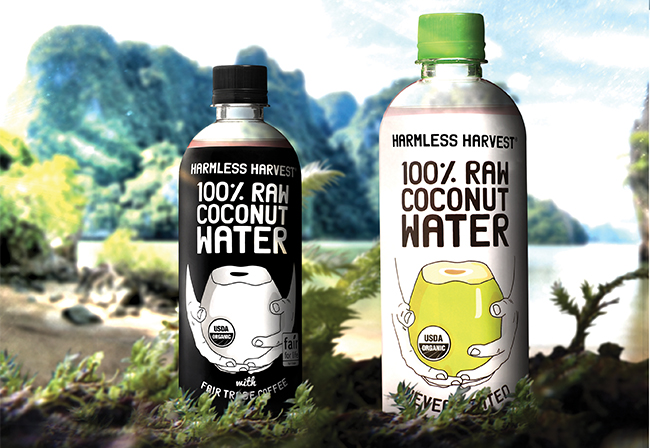 When brands in most beverage categories introduce a new flavor, it’s to extend a brand’s shelf presence and attract new consumers. In the case of coconut water, a product that is often considered an acquired taste, additional varieties were long considered “training wheels” – a way to get consumers familiar with the flavor.

But even in a category loaded with flavored line extensions, the original, or “natural” format remains the best-selling variety for most brands in the category.

While some flavors, including pineapple and chocolate, have shown some traction, company executives say that the majority have yet to make a profound impact on household penetration. Market research firm Nielsen pegs that at 10 percent. Who is in that cohort? For the most part, it represents a crowd of early adopters, natural food shoppers, those who might be more willing to try something new. Getting to the next level will take some more variety, however. 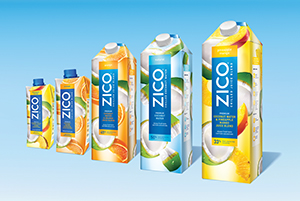 But a look at the way brands continue to pump resources into new varieties, particularly as flavor innovation and blending techniques improve, is revealing. The focus is on new products flavored with mainstream and familiar flavors – lemonades, Zico’s new Watermelon Raspberry product, and new blends that use coconut water as an ingredient to create low-calorie alternatives to traditional juice products.

That reasoning was evident in last year’s launch of a lemonade variety for both Zola and Vita Coco. For each company, the hope was that lemonade would be an introductory and incremental flavor aimed at new placement and sales where the category was seen as underdeveloped.

However well thought-out the strategy may have been, it doesn’t appear to have achieved as dynamic an impact as expected. A year later, Zola is repositioning the variety as a seasonal item and a “better-for-you” lemonade. As for Vita Coco, which buttressed its launch with a multi-market digital and outdoor advertising campaign, company spokesman Arthur Gallego stated that lemonade is “one of the brand’s top three best-selling flavors [out of five] and it’s still not as widely distributed as the other top two flavors: Pineapple and Peach Mango.”

Gallego noted that Vita Coco’s 500 mL unflavored offering is typically the brand’s best selling item, but that in recent months its 1 L counterpart has become the top-performing variety.

So if flavors have had an underwhelming impact thus far, even at powerhouse Via Coco, what is missing?

According to Harmless Harvest co-founder Justin Guilbert, the problem is that most brands add “a different flavor to kind of mask their product and get people excited about coconut water.”

“It’s really [about] the idea that function can come with flavor,” Guilbert said. “It’s ‘I’m getting the benefits of coconut water, but I don’t have to have the experience of coconut water. Our approach is different. We’re going to leverage the coconut water.”

Indeed, the bedrock of Harmless Harvest’s burgeoning business is the taste of its original “100% Raw” variety: an organic, Thai-sourced coconut water that is also high pressure processed, a safety method viewed as superior to pasteurization for maintaining the taste profile of raw ingredients. Harmless Harvest does market a handful of flavored products, including esoteric varieties like its Cinnamon & Clove and Cacao, but Guilbert said the company must walk a fine line when introducing extensions, because its customers are so devoted to the taste of the original unflavored product. 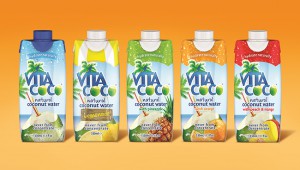 “It’s created this response, which is ‘your product is so good in the first place, so whatever you do to it, even if it’s improving the functionality or adding a new layer of flavor, you’re still always going to dilute the original flavor,’” he said. “So that is a key learning for us. That doesn’t mean that we not going to keep on developing formulas in the future and pushing the products that are currently on the market, because they’re selling well. They’re not outselling the original, but they’re selling well. It gave us an understanding the fundamentals of the audience that we’re selling to.”

Like Larsen, Guilbert views an expanding flavor set as essential to the continued development of Harmless Harvest and the category as a whole. While flavors currently represent close to 20 percent of sales, Guilbert believes that number could eventually rise to half of all revenue. The key, however, will be in how the company distinguishes new products from its original coconut water and creates different consumption opportunities.

“The only way to get to that [number] is if people understand that it’s a formula and blend,” he noted. “If you consider it a flavoring, like ‘coconut water with this flavor,’ we’ll never reach that. If we’re not able to break that complement barrier, we’re never going to get there.”

Zico is chasing those new consumption opportunities via its Chilled line. Introduced in August, the brand extension is the company’s first foray into perishable coconut water products. Packaged in 1.5 L multi-serve cartons, the line includes three SKUs made with not from concentrate coconut water: a “Natural” unflavored product and two 100 percent juice blends, Orange and Pineapple Mango.

Promoted as offering “the hydration benefits of coconut water and the delicious taste of fresh juice – with up to 45 percent fewer calories than regular fruit drinks,” the products launched in natural food sections of conventional grocers and are also represented in refrigerated cases alongside fresh produce. Larsen described Chilled as an effort toward building “a juice platform that’s sold in the produce section.”

Other brands recognize the potential of introducing coconut water as an ingredient to create additional variety and functionality into their core products. Organic juice stalwart Uncle Matt’s, for example, recently introduced a coconut water-blended variety of its orange juice; Odwalla, Naked and Bolthouse are similarly using it as an ingredient in many smoothies.

Zico is not alone in targeting the produce set. The space has reaped rewards for Zola, according to company founder Chris Cuvelier, who said that in 2014 his brand “drove more dollars in conventional grocery that Zico.” It’s a retail strategy that has its roots in the natural channel, in that consumers identify packaged goods sold in produce as aligned with with the perception of fresh and healthy food. 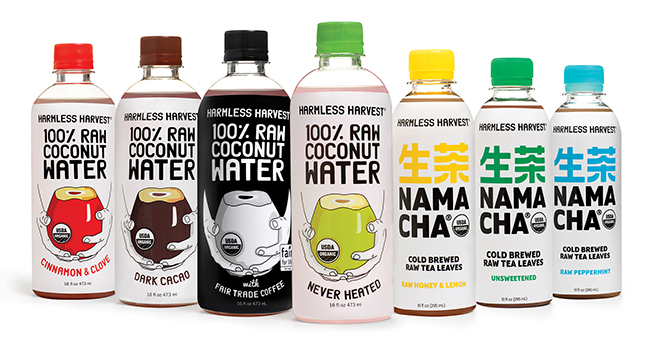 “You’re tying that consumer that is purchasing products in that same kind of space in the store, but also that consumer that buys like items,” Larsen said. “They’re driven by taste; they’re not driven as much by package or price.”

Larsen hinted at the development of more flavor varieties and blends, and while it’s unknown if a revamp of Zico’s short-lived Latte variety is in the pipeline, coffee-infused coconut water products have become booming line extensions for Vita Coco (with its Coco Cafe sub-line), Zola, and, more recently, Harmless Harvest, which debuted its “100% Raw Coconut Water with Fair Trade Coffee” in March.

Guilbert noted that coffee and coconut water blends are a “whole different world, because the functional benefit for coffee is very, very clear for people.”

“It’s a much easier combination for people to make,” Guilbert said. “Combining the two was a much was simpler composition to the audience. We’re selling out within hours, and we’re just trying to catch up to demand.”

Cuvelier concurs, pointing to Zola’s success with its Espresso variety (which recently leapfrogged Pulp to become the brand’s number two selling single-serve product) as an indication of how mainstream consumers can more easily grasp coconut water flavors that are infused with sympatico functional ingredients.

“We’re trying not to stay on this bleeding, cutting-edge thing,” Cuvelier said. “We’re a brand that’s gone from natural to conventional grocery. And so I want to look at things that are mainstream that I can bring into the category that there’s not a ton of education that needs to happen [so] that I can go drive revenue quickly.”