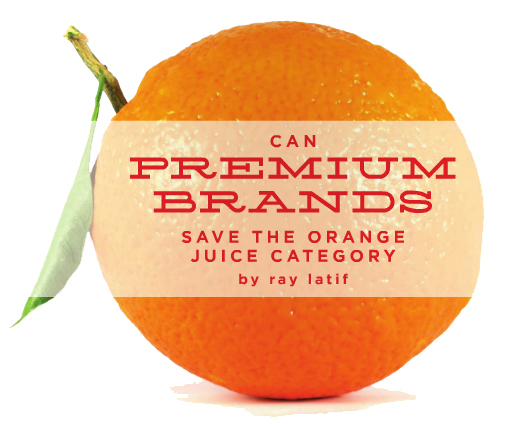 Orange juice, once a bright spot at the center of the American breakfast table, has lost some of its luster.

In a trend that began under the carb-counting Atkins Diet days, American consumers have continued in greater numbers to turn their backs on orange juice. But now, like soda, it’s the sugar content, which for mainstream brands like Tropicana and Simply Orange measures over 20 grams per 8 oz. serving, that is most often cited as the primary reason for reduced consumption. Declining demand has pushed sales of the beverage to their lowest point in 13 years, with recent IRI data showing year-over-year volume sales down nearly 6 percent for the 52-week period ending on July 12.

There is, however, a glimmer of hope for the beverage. Born out of a renaissance for home juicing and booming interest in cold-pressed blends, super premium and organic juice products have drawn acclaim and surging sales. Positioned as highly nutritious drinks, some marketers are promoting what they say are enhanced orange juices, with higher vitamin and mineral content than the legacy brands. 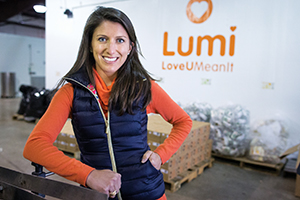 “There’s a huge difference between mass produced, conventional orange juice and what we’re making,” said Hillary Lewis, the founder of cold-pressed brand Lumi Juice, which markets orange juice varieties. “Commercially processed juices, what they’re doing is [using] oranges that have been frozen from the year before or even two years before and using chemicals to make sure the flavor profile is consistent. Even products that say ‘100 percent juice,’ they’ve been made with chemical flavoring that comes from an orange peel.”

Disseminating comparative information about orange juice production is often a one-store-demo-at-a-time effort for Lumi, which markets a variety of organic, small-batch and high pressure processed juices. The upside for Lumi, as well as other similarly positioned brands, is that more and more consumers are actively seeking transparency on how packaged food is made and where ingredients are sourced. A recent report from market research firm Technomic titled “Food Industry Transformation: The Next Decade” found that as consumers demand fresh, GMO-free, local, organic, and minimally processed foods, there will a growing premium on transparency, one that will continue to put pressure on current brands to account for their standards and practices. Gaining that type of trust from consumers is critical to sales growth. In its Global Health and Wellness Survey, Nielsen, a market data and analysis firm,  reports that “76% of global respondents that say they will pay more for foods that promote health benefits.”

Lewis said that greater access to details – often shared on social media sites – about large scale production of orange juice, including a widely read story published by Bloomberg Businessweek titled “Coke Engineers Its Orange Juice – With an Algorithm,” has changed the way that many consumers perceive brands like Simply and Tropicana, particularly in the natural and specialty channels.

“You see supermarkets like Whole Foods and The Fresh Market putting juicers in their aisles where people are making the juice as [customers] are shopping,” Lewis said. “And that’s really changing the way that people are consuming orange juice from products that are mass produced in the conventional sense to stuff that actually tastes real, like you’re biting into an orange.”

It’s that type of experience that Lewis hopes to achieve for consumers of Lumi’s Wahoo Orange juice product. One of the brand’s top selling items, the beverage is made with one ingredient: organic Valencia oranges. At $7.99 per 16 oz. bottle, however, it’s certainly a premium offering that is limited in where it can be sold. 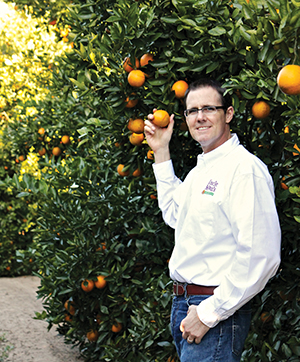 But that’s okay, says Matt McLean, the founder and CEO of Uncle Matt’s Organic. McLean, whose company sells a range of organic juice products, believes that because of the price gap, “you can’t sell organic orange juice everywhere just yet.”

However, he added, “As the organic market continues to grow, we get further and further acceptability in conventional supermarkets,” McLean said.

Promoted as “grown and produced without synthetic pesticides, GMOs or flavor packets,” Uncle Matt’s 59 oz. orange juice products, which are pasteurized, retail for $5.99, approximately $2-3 more expensive than major brands. The brand is sold nationally at Whole Foods, but also strategically distributed in grocery chains where consumers are increasing their purchases of organic products. Uncle Matt’s has a robust presence at Kroger-owned banners, where the brand is represented in over 1,000 locations. It’s also carried in 1,000 Publix stores, and is growing its presence in Safeway and Wegmans.

While brands like Minute Maid and Tropicana face annual sales volume declines at or nearing double-digits, Uncle Matt’s has grown at a torrid pace alongside the organic category. Its growth is 30 percent year-over-year, since 2010.

Major orange juice producers The Coca-Cola Co. (which owns Minute Maid and Simply Orange brands) and PepsiCo (Tropicana) have taken notice and are evolving, but not in terms of formulation. The beverage giants have responded to weakening demand and declining supply in the same way that they have in the face of plummeting soda sales: they raised prices. Recent Nielsen sales data for the four-week period ending on June 6 revealed that the price of a gallon of orange juice reached $6.63, a record for the beverage.

While pumping up the price on soda may be a way to stabilize corporate balance sheets, Tom Pirko, managing director of beverage industry consulting firm BevMark Consulting, sees potential play for higher orange juice prices as a way to establish the drink as a premium offering, particularly amid consumers’ thirst for healthy and better-for-you beverages. Pirko, whose comments came in a recent Wall Street Journal article, noted that “the idea is to create and launch brands that tell you that orange juice is more than what we thought it was.”

In a way, that has long been Uncle Matt’s strategy: building trust with its consumers by crafting a consistently high quality product, formulated as a sort of a counter argument to conventional orange juice. McLean noted that rising interest in the brand has come from millennial consumers, whose thirst for healthy products and willingness to research information on what they eat and drink is a key component of new sales.

“They’re on social media, they want to know more,” McLean said of millennials.

Millennials are also known for their predilection for premium products, seeking value in health and wellness over price. Promoting the benefits of orange juice, however, is something where producers have lagged in comparison to companies that market once esoteric, but now trendy “superfruit” juices, like pomegranate and coconut. Hoping to balance the scales, McLean sees opportunity to position oranges as “the original superfruit,” one that offers consumers the best value from both a health and financial standpoint.

“If you look at all of the antioxidants and vitamins that come in that one piece of fruit, you’ve just got to keep talking about the natural health benefits of it,” McLean said. “It’s there; just turn it around and look at the back of the label and look at the price and compare it to all of the other juices in the case and you’ll go, ‘You know what, dollar for dollar, ounce for ounce, this is the most powerful thing for my money.’”