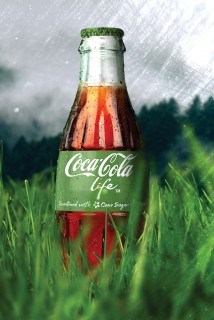 The United States has now seen a full decade of decline in the consumption of carbonated soft drinks and consumers’ shift away from the category is only expected to increase in the coming years. With public health officials pointing at soda as the culprit behind rising obesity and diabetes rates, it should come as no surprise at this juncture that these are challenging times for The Coca-Cola Company. For the world’s largest beverage company, the question is no longer whether or not it needs to reinvent itself to thrive but whether or not it can, and if it can, then how?

As much as the consumption of soda has declined in the United States, it should be noted that The Coca-Cola Company isn’t turning away from its base. Nor should it. After all, carbonated soft drinks still account for about half of the non-alcoholic beverages sold in the U.S. The brand has, however, been mindful of the better-for-you trends of the industry, and accordingly has targeted the more health-conscious consumer in its introduction of the low-calorie, naturally sweetened Coca-Cola Life. Additionally, the strong performance of Coke’s mini-cans suggests that the company can justify pricing more for less when positioning its product as a specialty purchase, a treat rather than a daily fixture to be slugged throughout the day. Even so, it seems unlikely Coke would really be able to sustain growth through pricing initiatives, as historically it’s a company that’s made its money by selling syrup. Lots of it.

“There still seems to be this feeling within the large beverage companies that if they can achieve the taste at zero calories or naturally sweetened, then the consumer’s going to come back,” says Neil Kimberley, Vice President of Strategy and Brand Development at Essentia Water and a former executive with Snapple and Hershey’s. “But this issue really may be deeper than that. We now have generations of kids who have grown up without carbonated soft drinks being the signature taste experience of their childhood.”

In February, Coke CEO Mukhtar Kent admitted as much during a quarterly earnings call, telling analysts that the brand was attempting to find new spaces to reach consumers.

“Today the average household globally consumes 26 beverages per day and of these 26 beverages only 1.4 are Coca-Cola company brand,” he said.

If that’s the case, the company still needs to figure out a way to connect with youth – even if it isn’t through the Coke brand. Growing the business by way of acquisition is nothing new for the company, and in its most recent efforts to diversify its portfolio the company purchased equity in Monster Energy and Keurig Green Mountain last year. But unlike the outright purchases of Fuze and Glaceau in 2007, Coca-Cola has taken an alternative, arguably more conservative approach in its recent stakes in Monster and Keurig. In doing so it’s allowed the company to participate in two major growth categories – energy drinks and single-serve, at home – in a big way, while allowing Monster and Keurig to maintain their independence and continue their companies’ forward momentum.

With Monster, Coca-Cola purchased a 16.7 percent stake for approximately $2.15 billion, firmly establishing itself within the energy drink category that they have previously struggled to find their footing in. As part of the deal Monster has transferred its non-energy brands over to Coca-Cola and in return, taken on Coke’s energy drink portfolio, which includes Full Throttle and NOS.

The most important aspect of the deal is that Coca-Cola will now serve as Monster’s primary global distributor, letting Monster into to its unrivaled worldwide distribution system. Given that nearly 80 percent of Monster Beverage’s sales are in the United States, there’s tremendous opportunity here for both companies to grow and for Monster to strengthen both its on-premise and international presence, areas where rival Red Bull has thrived. Coca-Cola will be able to reap the massive distribution profits of carrying Monster on its trucks while protecting itself from the baggage of negative press surrounding energy drinks that would have likely accompanied a full-on acquisition of the company.

In the case of Keurig, Coca-Cola appears to be making an investment that the potential future of single-serve beverage consumption will involve final preparation at home. At the top of 2014 Coca-Cola bought a 10 percent stake in the company and three months later increased that stake to 16 percent, making it Keurig’s largest shareholder. The companies have also signed a 10-year agreement for Coca-Cola’s brands to produce single-serve pods for Keurig’s systems, which is particularly relevant due to the forthcoming launch of Keurig Cold, an in-home brewing system that will give consumers the ability to create a variety of still and sparkling cold beverages, including soda, enhanced waters, juices, sports drinks, and teas. Keurig currently sees a penetration of 13 percent of U.S. households with its RTD single-serve coffee systems, but the launch of Keurig Cold could increase that penetration significantly. If Keurig Cold takes off, Coke’s got an entirely new channel to get its products to consumers by way of the Keurig brand.

“This isn’t something that’s going to change the beverage industry overnight, but it does have the potential to significantly impact it over a long period of time,” says Kimberley. “This is really a bet on where the market could be in the future.”

Coke also remains on the hunt for the next billion dollar brand through its Venturing and Emerging Brands (VEB) division. The company recently made a foray into the dairy aisle with the nationwide rollout of FairLife, a premium milk boasting extra protein and calcium. Whether consumers will take to FairLife’s taste and premium price tag remains to be seen – but the company has proven an ability to disrupt conventional categories before.

“They’ve certainly got the resources,” says Andy Steele, Founder of Anonymous Consulting & Sales and former Vice President of Business Development – Small Format at Coca-Cola. “Look what they did with Simply Orange. They took the old, tired category of orange juice, made a packaging play more than anything else, and now every brand’s bottle looks like theirs.”

Equally important to its ventures outside of soda, the restructuring of Coca-Cola’s domestic operations are a crucial component of the company’s preparations for the future. In what will undo the 2010 purchase of Coca-Cola Enterprises’ North America division, Coca-Cola is returning to a franchise model in an effort to streamline its operations and cut out the capital-intensive costs of maintaining trucks, warehouses, and the route to market. The company began the process in 2013, selling off distribution rights to five independent bottlers across the country and in 2014 it granted two new territories. The newly formed Coca-Cola Bottling Company of Central Florida will oversee a chunk of the Sunshine State’s distribution, while food and beer distribution powerhouse Reyes Holdings have signed on to provide Coke’s distribution throughout the greater Chicago area. Coca-Cola plans to refranchise the majority of its North American bottling territories by 2017 and complete the process entirely by 2020.

“This is really the single most important thing that they’re doing right now at the company,” says Jack Brennan, Managing Partner at GBS Growth Partners and the former General Manager of Coca-Cola Enterprises’ West Florida division. “Being able to manage the U.S. is critical, and this is going to get all the assets off the books and deploy very capable companies to operate for them. If they’re negotiating attractive deals for themselves as well as giving the bottlers some operational latitude, then that really is a huge thing for them.”

But if the refranchising points to what kind of company Coke ultimately wants to be, that’s still doubling down on its ability to move its portfolio of brands effectively through its bottling partners. Even with a portfolio of 20 different “billion dollar brands,” Coke still hasn’t found the replacement for its first, its most profitable CSD – and the clock is ticking. Getting the bottlers in line will create efficiency and cash, it’s true – and that’s something stockholders want to see, but it’s not transformational.

All factories seek to produce efficiently to meet demand – but it’s what the owners do when demand isn’t there anymore that determines a company’s long-term survival. That’s where the company’s current initiatives will have to be enough to make it truly stand for more than its namesake brand.