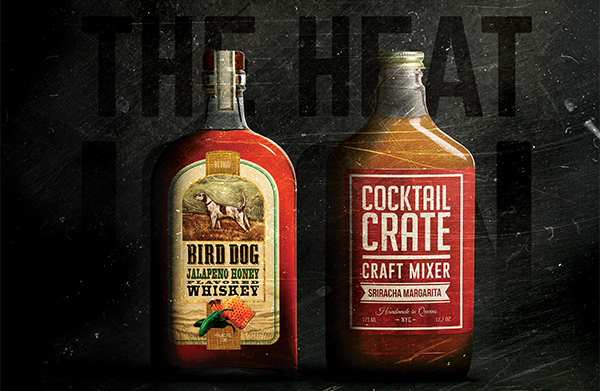 Drawing inspiration from a thriving craft cocktail movement that continues to tantalize tastebuds, spirits producers have in recent years unleashed dozens of flavored offerings, most of which are designed to be blended into savory elixirs. Among the throng of new entries are spicy varieties, emerging amid an influx of chile flavors in American food culture. A by-product of the increasing popularity of Latin and Asian cuisines, sustained interest in spicy ingredients has propelled the development of a range of flavored spirits, including cinnamon-flavored whiskey, jalapeño-infused tequila and Sriracha-blended vodka.

Demand for peppery potables has not only generated a significant amount of innovation in the spirits category, the non-alcoholic beverage side of the market is also evolving. Spicy ingredients are making their way into a number of beverage categories at a steady rate, with many companies taking their cues from cocktail culture, often using spice to enhance the final product rather than showcase it as a primary taste.

“The sensation of ‘spiciness’ in a beverage presents an unexpected refreshing aspect and is one that more and more people are gravitating towards,” said Tad Carducci, the co-founder of beverage consulting firm Tippling Brothers.

Indeed, a more adventurous American consumer has given way to a significant shift in the appeal for spicy foods in recent years. Technomic, a market research firm, reported in its 2013 Flavor Consumer Trend Report that a majority (54 percent) of consumers polled said they found hot or spicy foods appealing. That number rose by 6 percent as compared to 2011 and 8 percent in 2009. As might be expected, it’s millennials (aged 18-34) that expressed the greatest preference for spicy flavors, but Technomic found that interest in spice rose across nearly all age groups.

Carducci, whose client list includes major spirits conglomerates Diageo, Campari America and Pernod Ricard, believes that although “marketing comes into play to some degree,” he views sustained interest in spicy cocktails and foodie culture as moving the needle for the beverage industry as a whole.

“Beverage producers should always be watching the craft cocktail market and the trends that emerge from there,” said Carducci. “Also by paying attention to emerging food trends. Various consumer demographics these days are rather savvy to things gastronomic, much more so than they were a scant few years ago.”

The subset of premium carbonated soft drinks offers the clearest example of the growing use of  spicy ingredients in the non-alcoholic beverage industry. One such brand is Sipp, which markets a line of organic sparkling drinks and recently released a new “Zesty Orange” variety made with jalapeno extract. The ingredient is added to offer consumers “a spicy finish” to the orange soda, according to the company. Another example is Joia, an artisanal soda brand born out of the booming cocktail scene and whose flavor lineup was designed by a mixologist. The drinks, made with a range of savory and spicy ingredients including ginger, clove and allspice.

The craft cocktail movement has also contributed to a burgeoning market for ginger beer, long known as a beverage for those with a predilection toward spice. Positioned both as a mixer and stand-alone drink, ginger beer varieties have flowed into the market, including new entries from established brands like Reed’s and Spindrift as well as a range of early-stage upstarts.

While Carducci noted that “Sriracha, chipotle, habanero and jalapeño are all fairly common at this point in mainstream food vernacular,” it’s ginger that’s one of the most utilized spice-forward ingredients in non-alcoholic products. One major distinction is ginger’s positioning as an ingredient prized for its immune-boosting function as much as it is for flavor, particularly in nascent categories like kombucha and cold-pressed juice.

Ginger-based juices in shot form are increasingly in vogue among cold-pressed juice enthusiasts, with companies like Project Juice and Lumi Juice hawking 2 oz. blends heavy on the ginger, yet formulated with a balanced approach to flavor and eminently sippable. 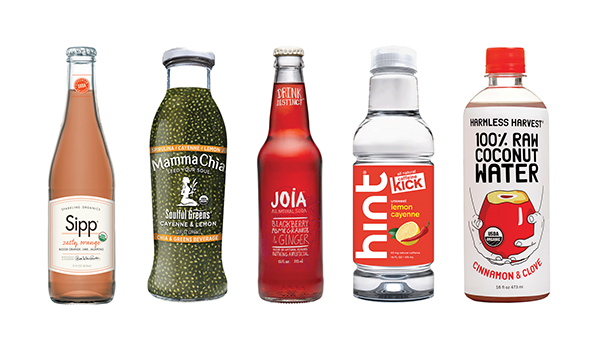 On the flip side, cayenne pepper, which has long been employed as a metabolism-boosting additive in cleanse-focused products, had rarely been employed as flavoring in beverages. That’s changing. Chia beverage leader Mamma Chia recently introduced a new line of Chia & Greens beverages that includes a variety formulated with cayenne as a way to “spice it up,” according to a description of the product. Last month, flavored water brand Hint launched a new caffeinated brand extension called Hint Kick, a three-SKU line that includes a lemon cayenne variety. Hint founder Kara Goldin said that the product was designed to be flavorful and unique as compared to other enhanced waters. The beverage (whose promoted function is energy) that has little, if anything, to do with cleansing.

Unlike cayenne, coconut water has long been promoted as an ingredient that offers flavor and function. Over the past decade, coconut water has grown in popularity as a refreshment beverage, and in recent years brands have rapidly expanded flavored offerings with a few finding some success in spiced varieties, such as Harmless Harvest which launched its Cinnamon & Clove as a seasonal product but is now part of the permanent lineup. Other spice-enhanced coconut waters include a Thai chili-infused variety from Taste Nirvana and Amy & Brian’s cinnamon-flavored product.

Among all non-alcoholic beverage categories, however, cocktail mixers, led by a sustained wave of new, artisanal brands, have taken the deepest plunge into spice- and heat-focused offerings. Powell & Mahoney, one of the largest companies in the nascent subset, has led the charge, attracting consumer palates with popular products like its Chipotle Bloody Mary and Jalapeño Margarita, each of which are distributed nationally. Cocktail Crate, a relative newcomer by comparison, has also won praise for its Sriracha Margarita, which like Powell & Mahoney is packaged and sold as a ready-to-blend formulation. Meanwhile, concentrated syrups companies are formulating products with esoteric ingredients designed to offer a spicy kick, such as BG Reynolds’ Falernum syrup, promoted as “a blissful and spicy eruption of ginger, clove, almond and fresh lime.” Pickett’s Ginger Beer is another brand which markets syrups designed for cocktails, with a specific focus on heat-forward ginger beer concentrates.

“The underlying [theme] is savory over sweet,” said Jim Pickett, the owner of Pickett’s Ginger Beer, which markets two varieties: Medium Spicy and Hot N’ Spicy. “I see a big movement where a lot of American cocktails five or 10 years ago were all sugar, fruit sweet bombs, and now they’re going much more savory.”