The Coca-Cola Company has responded to recent controversy surrounding the soft drink giant’s financial backing of the Global Energy Balance Network, a nonprofit that operates on the premise that America’s obesity epidemic has more to do with people’s lack of exercise than their caloric intake.

In an op-ed published in The Wall Street Journal, Coke’s chairman and CEO Muhtar Kent said that the company had made mistakes in the way it has “engaged the public health and scientific communities to tackle the global obesity epidemic that is plaguing our children, our families and our communities,” saying that the approach “is not working.”

As part of a company effort to improve transparency in how it produces and markets its beverages, Kent announced a set of new initiatives to be executed under Sandy Douglas, President of Coca-Cola North America, including the publishing of “a list of our efforts to reduce calories and market responsibly, along with a list of health and well-being partnerships and research activities we have funded in the past five years” on the company’s website. Additionally, Coke will assemble an oversight committee to assist in determining and governing its future investments in academic research.

“I am disappointed that some actions we have taken to fund scientific research and health and well-being programs have only served to create more confusion and mistrust,” Kent wrote. “I know our company can do a better job engaging both the public-health and scientific communities – and we will.”

Coke spokeswoman Joanna Price told the Journal that the company will publish the first disclosures on its site “within weeks.”

CHANGES AT THE TOP 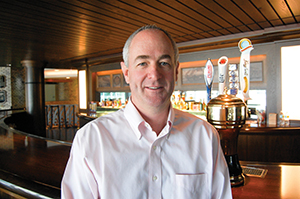 MillerCoors’ board of directors has named interim CEO Gavin Hattersley as the company’s permanent leader.

Hattersley — who came to the SABMiller/Molson Coors joint venture in July, following former CEO Tom Long’s departure from the company — had been serving as both the chief of MillerCoors and the chief financial officer of Molson Coors. He will continue to serve as Molson Coors’ CFO until a replacement is named in mid-November, the company said in a statement.

“Gavin is the right person to lead MillerCoors forward,” Pete Coors, chairman of the MillerCoors board of directors said in the statement. “Gavin has a great handle on what needs to be done to achieve growth at MillerCoors and he has the complete confidence of the Board, the employees and the distributor network to achieve this aspiration.”

On his first day in charge, Hattersley terminated two top MillerCoors executives — chief marketing officer Andy England and Ed McBrien, who had served as the president of sales and distributor operations. In their place, Hattersley named David Kroll – who joined MillerCoors in 2012 as the vice president of innovation and was responsible for the introduction of products like Redd’s Apple Ale and Smith & Forge Hard Cider — as the company’s new CMO. Kevin Doyle, who had been serving as the MillerCoors’ chief commercial solutions officer, replaced Ed McBrien as president of sales and distributor operations.

Meanwhile, after 25 years at the helm of New Belgium Brewing, co-founder Kim Jordan will step down as CEO and transition into a new role as executive chair of the brewery’s Board of Directors. Current president and chief operations officer Christine Perich, who began her career at New Belgium in 2000 and has also previously served as the company’s chief financial officer, has been named CEO. She will take over on October 9, the company said.

In a conversation with Brewbound, Jordan said it was time for her to take a step back from day-to-day responsibilities and move into a “higher-level strategic role.”

“I have been doing this for 25 years,” she said. “This kind of transition is inevitable and we think it is better to plan for it, rather than wait until people are absolutely burnt out. Christine is enthusiastic, young, and energetic, and it is a good time to make that cutover.”

“She [Perich] has been preparing for this for years,” Jordan added.

“After spending the past 15 years as a part of the New Belgium team, I am incredibly excited for this opportunity,” Perich said in the statement. “With Kim’s continued guidance as Executive Chair and the strength of our management team, I feel very confident in our ability to drive the business forward while honoring all the fundamental elements that have made New Belgium so successful.”

Jordan, 56, launched New Belgium in 1991 with then-husband Jeff Lebesch. The company has grown to become the country’s fourth largest craft brewery, according to the Brewers Association and in 2014 produced 945,367 barrels of beer.

New Belgium is 100-percent employee-owned and Perich was instrumental in guiding the company through its second employee stock ownership program (ESOP) transaction in 2012.