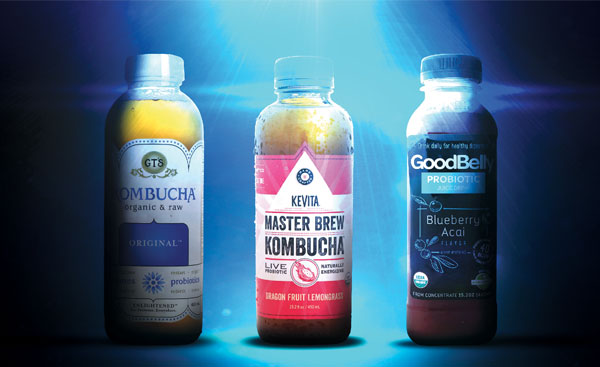 It’s one of a presenter’s worst fears: the debunker. And he was standing up to question Kora Lazarski.

Speaking at the Probiota Americas event in June, the SPINS data expert had just outlined the more than $10 billion of in sales associated with probiotic products – until an audience member stood up to question her premise.

The would-be debunker said he challenged the sales amount, according to Lazarski, claiming they included figures for products that claimed to be probiotic, but that didn’t include effective live cultures.

The debunker wasn’t after Lazarski, of course, but he was trying to make a point – that seen through another lens, the real probiotics business is much smaller, by a significant factor. At this point – in general, or after a friendly presentation, in particular – disagreements over nomenclature might seem more nit-picky than noteworthy. Actually, however, it’s a nit that could be worth billions of dollars for a category that one study said may hit $52 billion globally by 2020.

“Look, you can have a fermented product that contains whatever it contains,” notes Michael Bush, the president of Ganeden, which manufactures a popular proprietary probiotic line known as BC30. “But the term probiotic means something. And if you haven’t studied something to know what it does, it doesn’t necessarily mean that it meets the probiotic standard.”

Bush, who is also the chairman of the International Probiotic Association (yes, beer lovers, it’s abbreviated “IPA”), which sponsored Probiota Americas, is trying hard to bring that definition into focus. That’s because, disagreement over current sales figures aside, there is a lot of expensive research and development work going into proving the efficacy of specific, trademarked lines of probiotic bacteria. And there’s a lot of money to be made by selling those lines to the manufacturers who incorporate them into their products, to satisfy a public increasingly convinced of their potential benefits, which have been linked to everything from gut health to immunodefense to alleviating the effects of autism.

To the IPA and its constituent companies – many of which are the ones developing those lines, to be fair – the goal is to refine the definition of probiotics to encompass living, effective flora. If that aligns with the products they’re developing, it increases their value even more.

The standard being promoted by the IPA echoes one stated by the World Health Organization in a study from 2002, which declared probiotics to be “live microorganisms which when administered in adequate amounts confer a health benefit on the host.”

But there are major obstacles to implementing that standard: it falls outside any accepted regulatory standard currently in use in the U.S., where words like probiotic, fermented, even “Live and Active” – a seal promoted by the yogurt council – are already fairly interchangeable to most consumers.

Still, many manufacturers are starting to see the value of adding supplemental lines, even to products whose natural fermentation process might still confer a great deal of credibility, at least to consumers. Big companies like GTs and Kevita are adding extra probiotics lines to some of their kombuchas – the same lines that are being found in products ranging from baking mixes to frozen pizzas.

That’s not yet due to any specific regulatory action – according to attorney Rebecca Cross, the FDA’s main standard for probiotics deals more with making sure they aren’t potentially harmful through adulteration or claims that go beyond basic structure/function assertions. The IPA’s executive director said he met with the FDA last year, and has promised that regulation might be on the agenda, but so far that hasn’t been the case.

Similarly, civil suits, which often spur regulatory scrutiny, haven’t yet created major shakeups in the way brands define their probiotic content. Thus far the only lawsuit or action of note took place between 2008 and 2010, when Dannon settled a civil suit and an FTC action over its probiotic-fortified Activia yogurt. In that situation, however, the key issue was the frequency with which consumers needed to eat Activia (or drink the DanActive yogurt drink) to get digestive or immunity benefits.

Conversely, for kombuchas – the most cited example of probiotic drinks in the U.S. – the civil suits have been over sugar content. One reason? That same regulatory vacuum means that cases concerning reasonable functional benefit claims are going to be much harder to prove.

“I think it might be a hard one to bring in that the plaintiffs lawyers are always looking for the lowest hanging fruit, and probiotics have been used for hundreds of years,” Cross notes. “Challenging the health effects might be something that’s a lot of work that they might not want to do during litigation, unless there are certain more specific health claims being made.” 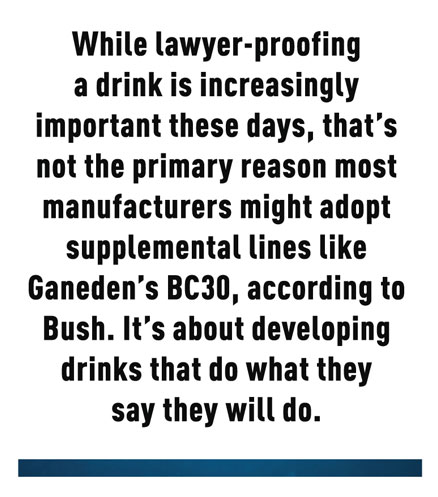 While lawyer-proofing a drink is increasingly important these days, that’s not the primary reason most manufacturers might adopt supplemental lines like Ganeden’s BC30, which is now in more than 100 beverage SKUs, according to Bush. It’s about developing drinks that do what they’re supposed to.

One of the big reasons some companies use the lines is to undergird their functionality with a line that has the support of scientific research; another is to make sure that the probiotics survive long trips across a national distribution network.

“The story around efficacy is the real story,” notes Alan Murray, the CEO of probiotic juice company Goodbelly. “Goodbelly has to stand for, ‘you’ll feel the benefits.’ You mention the strain and the science to guarantee the efficacy.”

Goodbelly itself is a brand that was developed around the company’s own proprietary strain of bacteria – essentially a beverage added to the supplementary line, rather than the other way around, but with the same reasoning: that the research into the specific bacteria allows for more and better claims.

But that in some ways runs counter to the entire reason that probiotics initially grew as a category, that basic belief that everything from yogurt to kombucha, by virtue of being a natural, easy-to-understand processing element, is going to be beneficial to the consumer.

Globally, over the past three years, launches of fermented products indicate that the overriding interest is in, at least for now, what that broader definition of probiotics might represent, rather than what the overall efficacy is. About half of the newly launched products with probiotics are also labeled fermented, according to information supplied by Innova Market Insights, which noted fermentation is also “easier to understand than other food processes.” That return to simplicity has also been reflected in overall natural and specialty channel growth, and it’s also why terms like fermented, live & active, and probiotic are all on the rise together.

“Probiotic, it’s one of those claims that has gotten ahead of regulation,” Lazarski said. “There really isn’t consensus about what really is the correct strain or dosage or genus of the bacteria, or which condition a strain is supposed to help.”

Still, even the makers of fermented products admit that there’s one more reason they might have to eventually add patented probiotic lines to their products, to meet a stricter and more comprehensive definition: the fact that the growing popularity of more common, probiotic-added foods and beverages, from sodas to burritos to trail mix, could further marginalize their own products.

John Tucker, the CEO of Farmhouse Culture, which markets a fermented “gut shot” made from products like kimchi or sauerkraut said he’s “very confident” that his current offerings don’t need any kind of supplementation to meet probiotic standards, but that “Krauts, kimchis, they aren’t a common part of the American diet, they’re polarizing taste flavors.”

“it’s more broadening of the portfolio,” he said, where a supplemental line might make sense. “We’re developing products that we believe will meet the consumer taste platform. But taste is king.”