It may not rank up there with capitalism vs. socialism, or even Red Sox vs. Yankees, but over the coming years a significant clash of worldviews will unfold that’s of relevance to anyone in beverages. I’m referring to Coca-Cola’s push to refranchise its North American bottling system – the so-called red system – even as its archrival PepsiCo stands pat on owning and operating the bulk of the blue system. The accelerating progress that Coke is making in assigning territories to existing and new partners garners some routine coverage these days, but not much is being written about the broader clash between this and Pepsi’s stand-pat stance.

Let’s recall the history of this developing clash: PepsiCo made the first move, agreeing to acquire its two biggest North American bottlers, Pepsi Bottling Group and PepsiAmericas, in 2009. (PBG had been spun out of PepsiCo a decade earlier.) Coca-Cola’s CEO, Muhtar Kent, for his part, insisted he was perfectly happy with the franchise system – only to turn around early the following year and notch a deal to acquire Coca-Cola Enterprises’ North American bottling operations. At the time, two theories reigned: either Coke had changed its mind, or the company had simply been duplicitous about its intentions all along. My own hunch was that Coke simply saw a chance to rewrite an archaic contract that restricted such simple expedients as, say, shipping casepacks of cheap Dasani bottled tap water direct to retailers, then get the business back out into private hands under a new set of rules more in tune with the complexities of today’s retail scene. In other words, as stated, Coke never stopped believing in the franchise system; this was just a bit of expensive disruption on the way to attuning the system to the needs of the 21st Century. 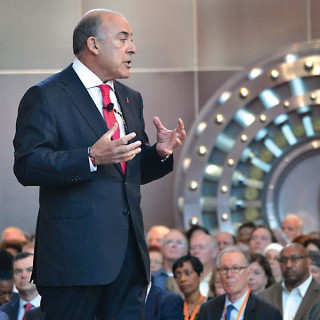 That’s duly how things have played out, albeit with a fair amount of improvisation on Coke’s part: it’s accelerated its initial timetable for North American re-franchising, aiming to get it all back in private hands by the end of next year, and it’s also backed off a plan to reserve manufacturing rights to itself. Of course, some divergences from plans were to be expected in the give-and-take of complex negotiations with bottling partners, who might have been expected to argue hard to retain the bottling activities that have always been a core competence.

There’s less to say about Pepsi: it’s continued to stand pat with its strategy of owning its distribution.

So that leaves us with a pretty fundamental contrast in how the two biggest beverage companies go to retail. In Pepsi’s view, controlling its own distribution allows for seamless integration, putting everyone in the system on the same page and keeping the gears tightly meshed in executing strategy (eliminating backlash, engineers would say). Its CEO, Indra Nooyi, has argued that this will foster innovation, as the company will reduce resistance to new brands from independent bottlers who’re more inclined to focus on their go-to brands with the highest velocity and the biggest drops. PepsiCo’s priorities will be the bottlers’ priorities because Pepsi and the bottlers are one and the same.

Coke, by contrast, is opting for creative tension, though it never employs that phrase. It’s betting that putting its brands in the hands of agile, independent businesspeople will eliminate the bureaucratic sclerosis that has characterized Coca-Cola Refreshments, as its in-house bottling arm is called. Implicit is a notion that the routine friction that comes of working with feisty independent bottlers is a productive way to hash out the most productive strategies and tactics. Also unstated, but I think real, is a recognition that having ownership of your business rooted in the community will amplify your voice in local and state debates over the marketing and sales of sugared beverages. And of course, in getting a sizable chunk of hard assets off the books, Coke returns to its traditional asset-light model of being a branding and marketing specialist. Presumably, the markets appreciate that.

Personally, I’m with Coke on this one, though it’s way too early to call any winners or losers yet. The company is going with more contiguous, regionally congruent footprints, and a mix of both proven incumbents like Coca-Cola Consolidated and Coca-Cola Swire and hungry newcomers, notably the MillerCoors giant The Reyes Group, which has developed a superb reputation for execution in beer distribution. There seems little question that Coke’s two superb Latin American partners, Coca-Cola FEMSA and Arca, will get roles, perhaps in Hispanic-heavy regions like the Southwest and Southern California.

Why do I think this works? Just as having friendly competitors to my newsletter over at BevNET encourages me to make a few extra phone calls each week, I think that tension between concentrate supplier and independent bottler forces each to stay on its game. Coke knows outside bottlers may push back on much of what it proposes, but seems to accept that this should make for a healthy debate. Less clear is the role of outside brands, though I kind of hope Coke is enlightened enough to allow these partners to serve as incubators for new segments and products that seem to be connecting with local consumers while keeping the pressure on Coke to engender its own innovation pipeline. There’s nothing like the knowledge that a bottler might go elsewhere to encourage a bias toward action among the innovation teams.

It’s certainly too early to conclude Pepsi’s strategy isn’t working, though. Like Coke, it’s been doing OK eking out a modicum of growth and price realization in a U.S. market where all core CSDs are in decline. So maybe maintaining a tight grip on bottling and distribution will prove to be the right strategy. If it isn’t, there’s nothing to stop Pepsi from embarking on its own refranchising initiative down the road. I’ve been a bit surprised, though, that activist investors like Nelson Peltz have chosen to attack the company for its Power of One strategy of melding beverages and foods, rather than addressing the liabilities of a bottling strategy that keeps all those assets on the books and has the potential to distract Pepsi from pursuing its core marketing competency.

There are two more wild cards, Dr Pepper Snapple Group stressed the need to strengthen its white system to be a more credible alternative to the red and blue systems, but arguably it blinked when Coke and Pepsi moved to acquire their bottlers. At that point, given change-of-control provisions embedded in its contracts, DPS could have reclaimed blue-chip brands like Dr Pepper and Crush to fortify its system’s retail clout. Instead, DPS cashed big checks from Coke and Pepsi, in deals that did much to enrich shareholders but departed from the stated strategy. That has kept the white system a distant number three, though it has strengthened some areas like Florida, and can count among its independent distributors such formidable houses as Honickman Group, Kalil and Polar.

There’s also Anheuser-Busch InBev. The beer behemoth has long maintained a skeptical stance toward non-alcoholic beverages, (an earlier foray under the rubric Ninth Street Beverages was aborted once A-B lost its independence). But things have changed: the company is now run by Brazilians who cut their teeth in a market where beer and soda sit comfortably on the same trucks. The company recently struck a partnership with Starbucks to jointly market Teavana iced teas, starting next year, and a venture arm called Zx has been beating the bushes for emerging brands on both the alcoholic and non-alcoholic sides. So A-B seems to be gearing up to make another run at NAs. Meanwhile, to win government approval for its merger with SAB Miller, ABI has agreed to cap its company-owned distribution at no more than 10 percent of domestic volume. That nets out as another strong independent distribution network that could prove an increasing force in NA beverages. It all makes for a really intriguing distribution landscape in the coming years, if not a case study in geopolitics and sports.