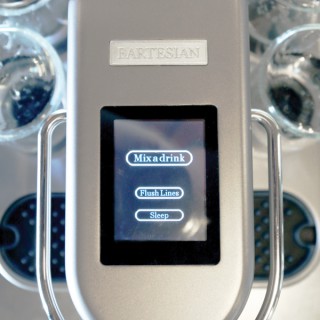 From an ionizing glass to a “Nespresso for Cocktails,” we’ve seen a science fair’s worth of experimental beverage applications lately, and it’s time to consider the intersection of beverage and technology.

Normally, when we talk about beverage technology, our minds turn either to new processing methods, like HPP or new advances in chia grinding, or ingredient innovation, such as making pea protein blendable in solution so as to be non-gag-inducing.

Technology is also hacking into – disrupting, as the cool kids say – many of the ways that people either buy their drinks in terms of the traditional retail model or market them, as social methods are replacing the old, tired media formats that produced ink-stained wretches like yours truly.

But a lot of the biggest noise is actually being made at home, a safe distance from grocery aisles and Costco pallet displays. Companies see the opening created by Sodastream and Keurig and start to wonder if there’s room on the kitchen counter, rather than the deli counter, for disrupting the traditional beverage transaction.

In other words, we have seen the future of beverage and tech, and it seems to be gadgetry.

The Juicero certainly sits at the top of any list of these kinds of things, if for no other reason than an astonishingly high initial price – $700, about the cost of, say, a reasonable refrigerator or oven. While there’s a lot of juicing going around these days, I have concerns about Juicero’s ability to reach beyond the devoted. When looking over the marketing materials, the key disruption point seems to be that, by shipping bags of pre-chopped produce to it eliminates shopping and washing vegetables for home juicing by shipping bag. Those are absolutely worthy disruptions, no doubt, but they seem to be the kind of disruptions that devoted juice-at-homers would want to get rid of, rather than the unconverted. And how many existing members of the juicing choir are willing to divorce themselves from their custom blends for the convenience of the Juicero pack, even if it cuts out the chopping step?

There are environmental issues surrounding Juicero, and while they’re troubling, they are still something of a red herring for me. It hasn’t stopped Keurig from blasting its way into so many homes. For both Juicero and the next gadget I’m about to discuss, the Bartesian, there’s also the angle that they can have an impact in restaurants and hotels – Juicero has already signed a deal with Le Pain Quotidien – that could enable its investors to weather the early hiccups that come with introducing a home appliance. If innovation is solving a problem you didn’t know you had, then there might be a chance for this massively integrated juice program. But the company still expects that three quarters of its sales will be in the home, and that means that a lot of home users are going to have to decide they can’t possibly wash another stalk of celery.

Speaking of celery, that’s something that’s also deployed as a stirring agent in one of our favorite juice drinks, the Bloody Mary. But it’s also something that you’d have to add on your own if you were to rely on the Bartesian, which seems to also be another “preparation disruptor.”

This automatic cocktail maker uses pods of pre-mixed cocktail ingredients imprinted with a bar code, then infuses booze from bottles that have been plugged into the unit. The company’s COO, Ryan Close, stopped by the office last month and managed to impress the BevNET team, who are only slightly less enamored of free cocktails than they are of breathing. The machine itself comes at lower price points than the Juicero – about $300 to start. But the Bartesian’s pods aren’t yet commercially available; they’re expected to cost about $1-2 apiece, not too bad when compared to on-premise rates, but like the Juicero’s proprietary juice sacks, they tend to take customization off the menu.

Both systems are long on design; we can’t yet say the same about Global Ionics’ “Beverage Power” because we only caught an early glimpse of the device when company founder Ken Davidov stopped by to try to convince us that running an electric current through our drinks will make them taste better. The human body completes the circuit as the consumer drinks out of a cup equipped with the Beverage Power device, effectively using the electricity to line up all the negative ions in the drink to help drive them more smoothly into the taste buds, enhancing flavors and textures.

For me, the fear of electrocution dampened any experiential enhancement, but I’m kind of a coward. Davidov isn’t, however – he’s stepping into the arena in two ways. First of all, he’s taking on the beverage gadgets. Second, the whole ionization thing, well, it’s gone global, which is why he was in such a rush to get us to check out the Beverage Power.

“Somewhere in Japan,” he told us, “there’s this woman who has been working on an ionizing fork.”

That might be a troubling bit of news for investors, but hey, the Beverage Power does come with a competitive advantage: since it works with a glass, it has compatibility with both the Juicero and the Bartesian. After all, you can’t drink juice – or cocktails – with a fork.