It wasn’t a very special reunion episode, but given the number of special guest appearances, it was pretty much Old Home Week at the Dr Pepper Snapple booth at NACS.

Between the teams at High Brew, CORE, and Body Armor all hanging around, along with visits from other DPSG allied brands like Vita Coco and Bai, it was pretty easy to see the impact that a strong team can have on the growth of the industry. In this case, it was the team from Glaceau, the deal now almost a decade in the rear-view but still developing vital brands.

From the sales teams, here was Andy Steele, channel opener extraordinaire, running the East at High Brew after a profitable detour into the world of jerky. There was Andrew Griffiths, sporting a CORE shirt after helping to build Zico with Mark Rampolla. Strategist Jason Camillos was also back in a brand polo after spending the last few years working in private equity with First Beverage Group. On the marketing side, Mari Johnson was back in the fray, as CMO at High Brew.

“It’s an incredibly proud feeling,” said Mike Repole, the former president of Glaceau and the legendarily maniacal general behind the sales team that put it over the top. “You walk around, there are something like 150 different vice presidents and brand founders and more,” that came from Glaceau.

To back it up, Camillos produced a chart from a “Glaceau alumni” Facebook page. It’s a chart with the combined income of, say, the Netherlands. From barkTHINS to Zipcar, hese folks aren’t doing poorly at all.

They may have migrated far and wide, but there were so many Glaceau alums and associates with those three DPSG affiliates that NACS brought a family feel – if the family generally spent its time talking to buyers from Sheetz or WaWa.

Sales execs compared notes about everything from their shoe colors to the beer preferences of different regional buyers. Investors and distributors stopped by – Ken Sadowsky, standing taller than most, threw high-fives and handshakes. Having made a name – to go with a nickname – in the coconut water business, Michael Goldstein – “Goldy” – stopped by, a coterie of Vita Coco associates in tow. Lance Collins, the genius behind FUZE who also came up with the ideas for both CORE and Body Armor, entertained buyers and old associates with frantic energy, his two new platforms spreading their wings and starting to catch air underneath them. 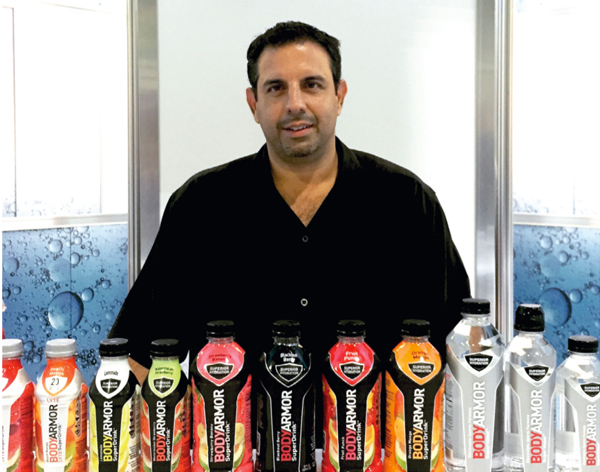 But at the center, making a rare show appearance to usher in some of the latest Body Armor innovations, was Repole himself. Repole is all in on Body Armor these days – he’s shut down most of the other CPG and restaurant gigs in his portfolio – although the horse racing game continues to compete for his attention.

Meeting with a reporter for a chat, he couldn’t help smiling through his game face and spreading the family vibe.

The reporter dissembled, saying he had been one of the first to declare that Body Armor – an idea that took root with Collins but is now being run by Repole – had turned the corner from a shaky debut.

In the the background hung the possibility that other brands might soon be the focus of attention. Elsewhere on the floor, probiotic segment innovator KeVita was close to selling to Pepsi. Hanging even thicker in the air was speculation about the potential purchase of Bai, another DPSG allied brands stablemate, and one with deep connections to Glaceau, having pulled investment from former CMO Rohan Oza.

Some brands were further along than others. Who knows what innovation or promotional plays will ultimately prove too hard to pull off, whether the consumer might eventually move on when promotions end or the trend winds shift? But for now, there they were: slick brands moving the industry forward, carried on the backs – and in the sales binders – of a well-trained set of enthusiastic, back-slapping old friends and competitors.

Soon they would leave, to compete for space in the all-important cold box. But just then, even seven floors down in the bunker that’s known as the Georgia World Congress Center, the cold box was nowhere in sight. Instead, there was just a warm reception for an old championship team, back together to sip drinks at a reunion. Convenience stores might not be your conventional family destination, but at this convenience store convention, there sure seemed to be a whole lot of family.